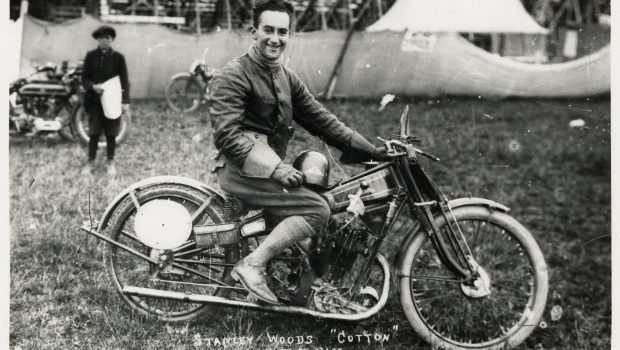 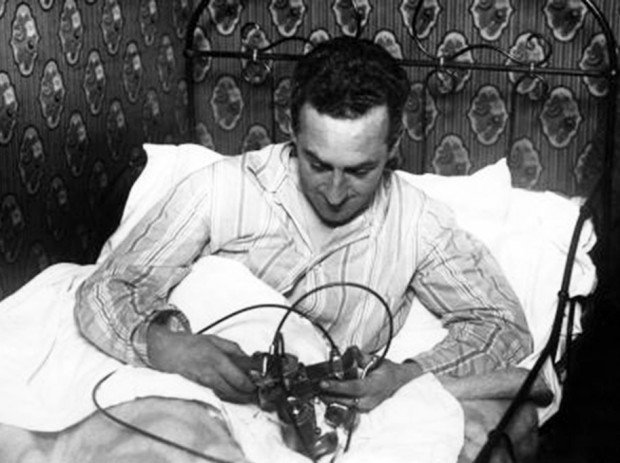 He’s doing this in his sleep…

Stanley Woods got his first taste of motorcycles riding an Indian sidecar filled with blackmarket petrol during WWI in Dublin. He must have liked the flavour. Stanley subsequently decided would visit and compete at beach racing events on whatever he could beg, borrow or steal.

He first visited the Isle of Man in 1921 and decided he was going to have a crack the following year, announcing to friends as they together sat on the verge at Hillberry, “I could do that.”

Back in those days there were only three races during the week – the 250cc, the 350cc and the 500cc. Stanley knew he had to get a serious bike if he was going to make an impact. So he began a campaign of epic bullshitting, telling one team he had been signed by another team for the 500cc, but he needed a 350 for the other race and vice versa. In an attempt to cadge a decent bike, Stanley also offered the contact details of various ‘racing clubs’ and would forge his own glowing testimonials.

Cotton fell for the cunning ruse and offered him one of its new overhead-valve Cotton-Blackburne bikes for the Junior TT. Never having actually seen Woods the team manager seemed a little underwhelmed meeting him in the flesh and declared, “My God! They’ve sent me a bloody schoolboy!”

His first race on the Cotton was eventful. He dropped the spare spark plugs out of his pocket on the start line, hit the kerb at Governor’s Bridge, and had the bike catch fire when it was being refueled. After the inferno had been quenched he evaded the remonstrating officials and blasted off down Bray Hill only to hit the same kerb at Governor’s, fall off the bike again at Sulby, stop to adjust the valves and then finish the race without brakes. He did manage to secure a very creditable fifth place. One year later he would win his first TT on the Cotton. 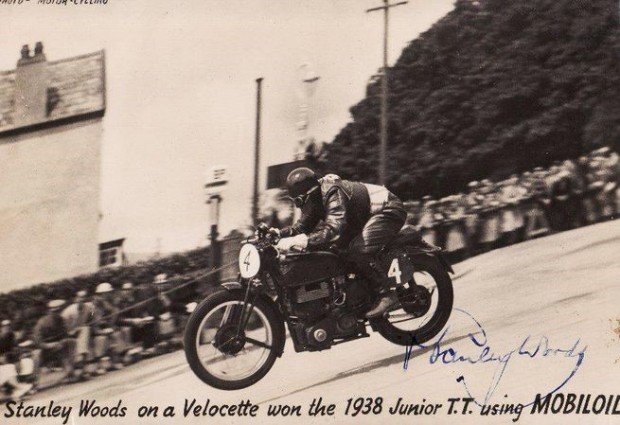 He clearly wasn’t taking it easy.

In 1926 he changed marques and rode for Norton amassing five TT wins in the next eight years, leading the press to declare him the ‘First Motorcycling Superstar’ and nicknaming him the ‘Irish Dasher’. Murray Walker, whose father was a TT competitor between 1920 and 1935, remembers Stanley as being a fearless yet unassuming bloke who always brought him a huge box of caramels every year from his other job at Macintosh Toffees in Dublin.

Stanley tired of the formality at Norton and in 1934 he jumped ship to take up an offer from Husqvarna. His first test ride was on a frozen lake in Sweden which he survived only to run out of fuel whilst leading that year’s Senior TT.

In 1936 he signed for Moto Guzzi rewarding them with a double and making them only the second non-British team to win a TT since its inception in 1907. 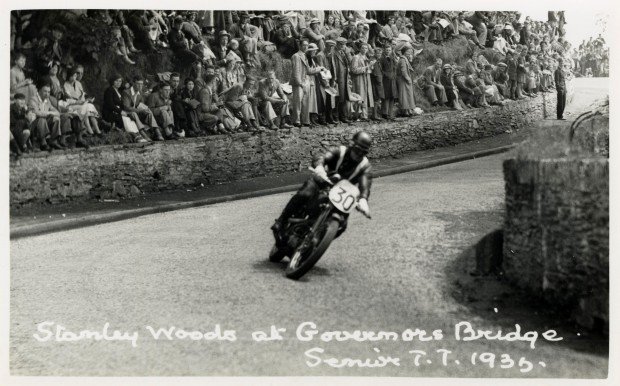 No-one needed to put their knees down back then.

Political considerations led to Moto Guzzi being excluded from the following years races due to Italy’s invasion of Abyssinia. So Stanley rode a Velocette to second place in the Senior and rode the exotic three-cylinder, supercharged German DKW two-stroke before repeated stops to replace spark plugs ended his challenge.

The years 1938 and 1939 saw two more wins for Stanley on the Velocette before the outbreak of WWII halted racing until 1947, by which time declining health had forced him to switch to trials and motocross riding.

As well as amassing 10 TT wins in his career, Stanley Woods also racked up a total of six Dutch TTs and 29 Grand Prix wins. His 10 TT haul was not surpassed until the Hailwood era some 30 years later.

In 1968 Stanley was voted the Greatest TT Rider and it would have been hard to argue that choice at the time. The modern TT format allows riders to enter twice as many races as pre-war riders. One thing that does strike was the similarity between Woods and Joey Dunlop, with both men being described as introverted, self-effacing and mechanically gifted.

There is a widely-told story that in 1974 Stanley Woods was asked to attend the Classic Bike Show in England and was discovered languishing in the general admission queue. Carl Fogarty states he saw Joey do the same thing 20 years later at the British Bike Show. Humble heroes both. 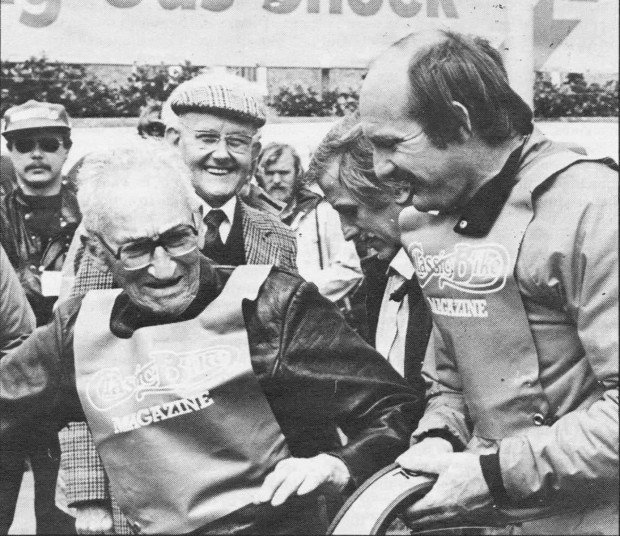 Stan (left) and some bloke who wanted his autograph.