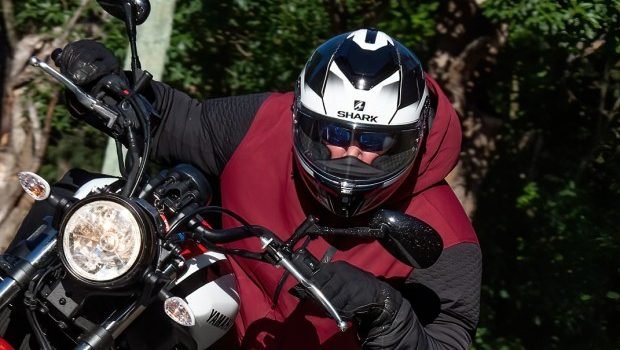 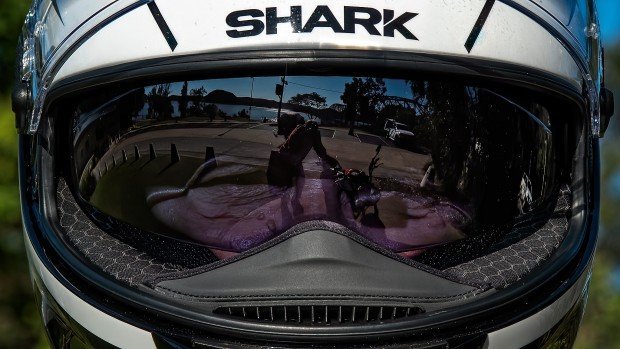 This is me in a reflective mood.

IMAGES BY NICK ‘WHY ARE YOU PANTING?’ EDARDS

I can only imagine an impish French designer beheld this entirely new Shark marvel and declared: “Mon Dieu! I shall call it Shestter because if I call it ‘Napoleon’, I shall be guillotined!”
So that’s its name. But I don’t care because a rose by any other name would smell as sweet, as young William observed in those halcyon pre-Plague days.

A solid update on the popular and very sexy-looking Spartan range, Shark has done well with this new iteration. 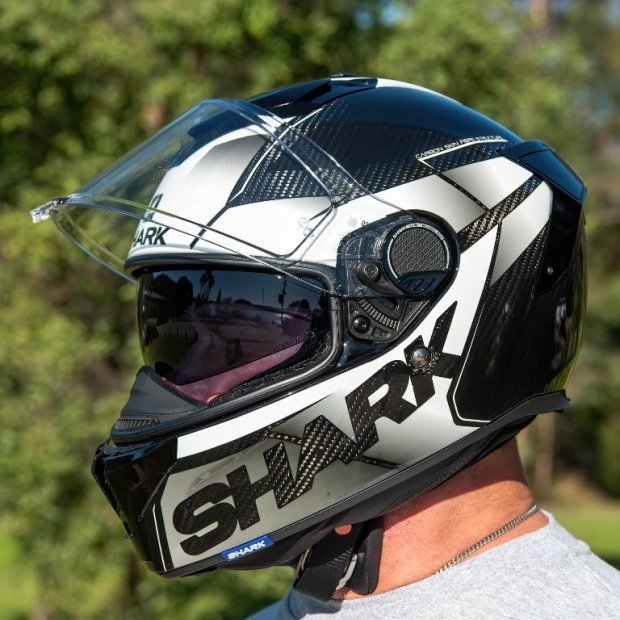 You can see how well the drop-down sun-visor works and the new locking tab on the front of the visor.

At a relatively lightweight 1540g, you can get it in two outer shell sizes to cope with smaller heads. And it’s lashed with gorgeous carbon-fibre, which counterpoints the snazzy white-and-black graphics, wings, and vents to great effect. It is a damn fine-looking lid.

The updates are as follows:

Ventilation has been augmented via two Venturi-like openings in the chin-piece, which draw air into the lid by creating a vacuum – just like on those wondrous vintage motorcycles us old people complain about all the time. Except this works better and all the time. 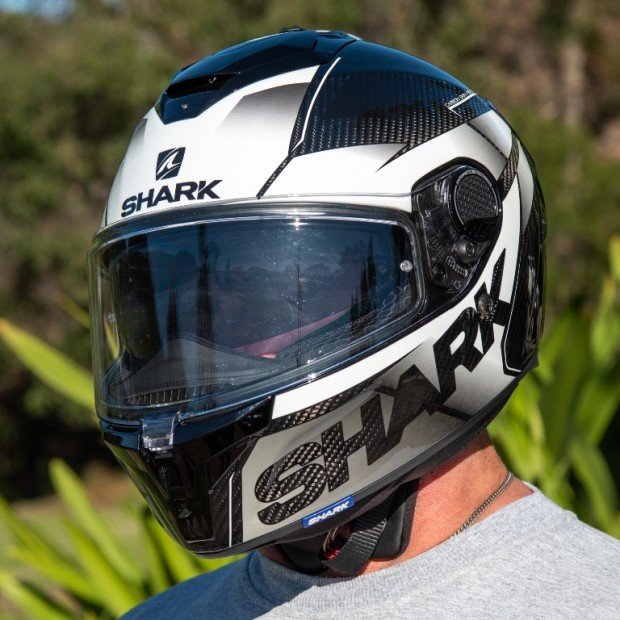 Everything is deployed, visor, sun-visor, me panting inside the carbon-fibre.

There’s the usual very effective big exhaust vent on the back, but the biggest update is the new visor-locking system, which is adapted straight from the Shark Race-R Pro GP. It now locks at the front of the anti-scratch visor via an initially fiddly button. It was only fiddly because I wasn’t used to it. But once I’d thumbed it a few times with my gloved hands, the new synapses kicked in and it was fine. It is a much better visor-locking system than before. 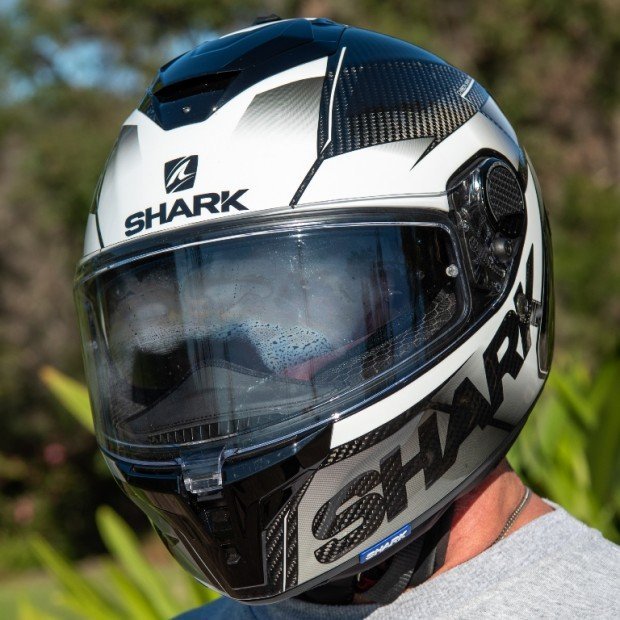 Note the artistic misting of breath-fog. Fit the Pinlock. Make the effort.

Replacing the visor is kinda fiddly too, but that’s why YouTube was invented. It’s really not that bad and I am kinda ham-fisted, and you can practice your French swear-words when you’re doing it, as I did.

It comes with a Pinlock inner visor ready to fit, and the drop-down sun-visor is one of the best in the business, because it doesn’t sit on your nose or at the bottom of your vision when deployed. 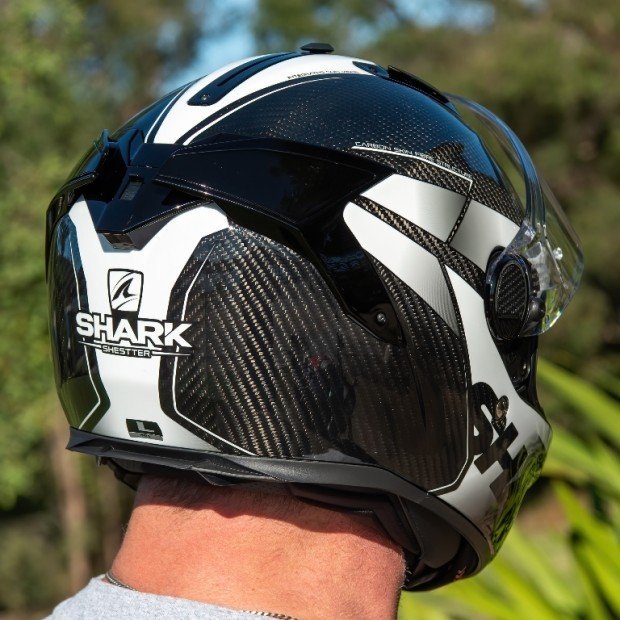 The graphics are killer, as are the wings. The name is next level French.

The liner has changed a bit, but remains removable, washable, anti-bacterial, with emergency release tabs, and is eyeglasses friendly. For me, there is no wear-in period with Shark lids. They’re comfy on the first ride.

It comes ready to fit the Sharktooth Prime comms thing if that’s your gig, and since I have done this once with great success, I can declare it’s not hard to do.

On the road, the field of view is excellent, but it’s not a cone of silence. There is some wind noise, but it’s not intrusive unless you lift the visor. Then there is a formidable whistling noise. This noise reminded me of my keening bladder, which needs to be emptied with timorous regularity these days, so that’s not a bad thing. Very few helmets don’t make some kind of noise when you lift the visor, so it’s no deal-breaker for me. 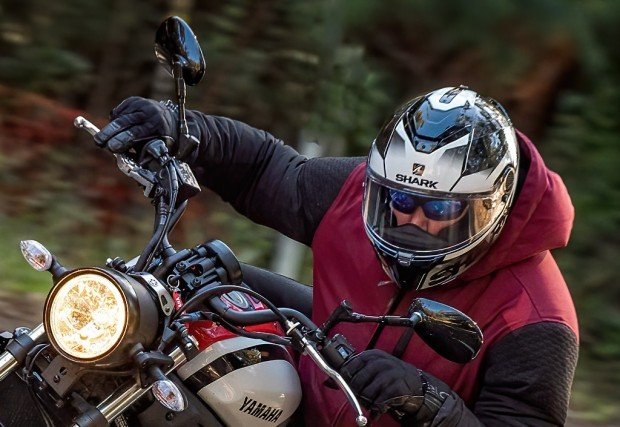 There is no lift at speed, but without the Pinlock it fogs quickly despite the breath guard, so fitting that is a must. Otherwise you go through this strange ritual of: visor down it’s cold, fog blindness, slow down, lift visor, whistling as fog clears, visor down, speed up, fog blindness, and so on.

The Spartan GT Carbon exudes quality, as it should. It’s not a cheap helmet, but it’s not one of those sassy four-figure jobbies either. It’s quite a lot of helmet for not an indecent price, with well-thought-out upgrades and killer graphics.

And yes, it does come in colours other than bridal white.

WHERE CAN I GET IT FROM? Shark helmets are widely available. I can Google it for you, but what would be the fun in that?