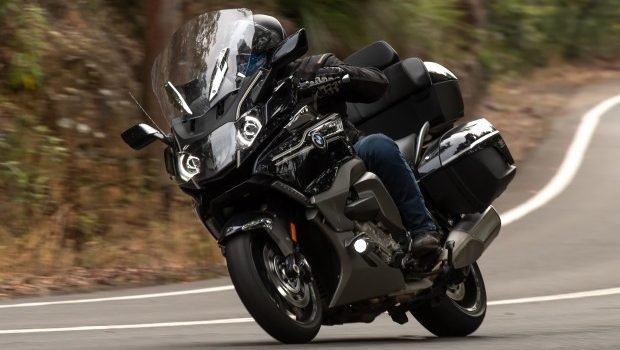 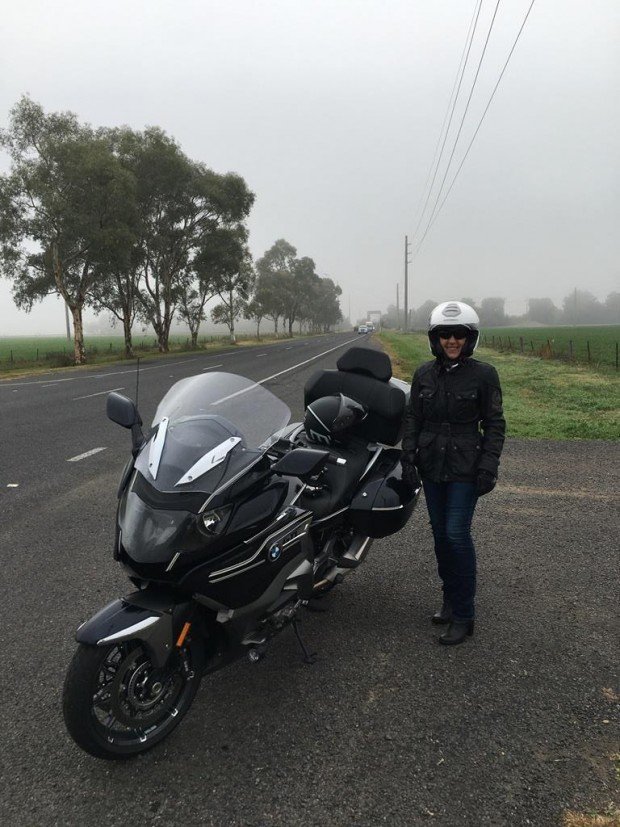 “Of all the bikes you’ve put me on over the years, this is the one. It’s magnificent.” 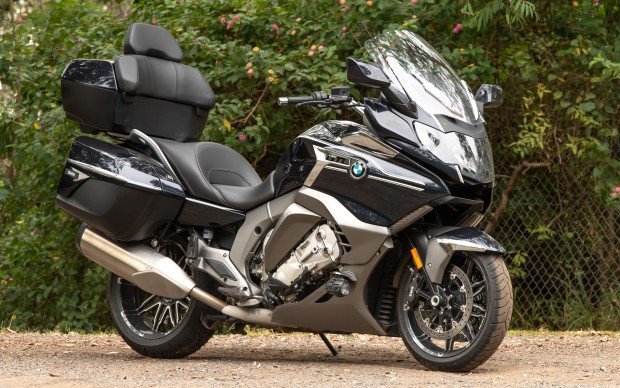 If you’re after Road Presence, look no further.

In the past, when the chatter got too much, a man could accelerate, and the blessed wind would render the noise coming from the pillion seat inaudible.

But the GTL has this electronic screen – which, when it’s raised – places the rider into a calm bubble of almost-windlessness.

It also places the pillion in the bubble too…and everything the pillion says is also inside that bubble. 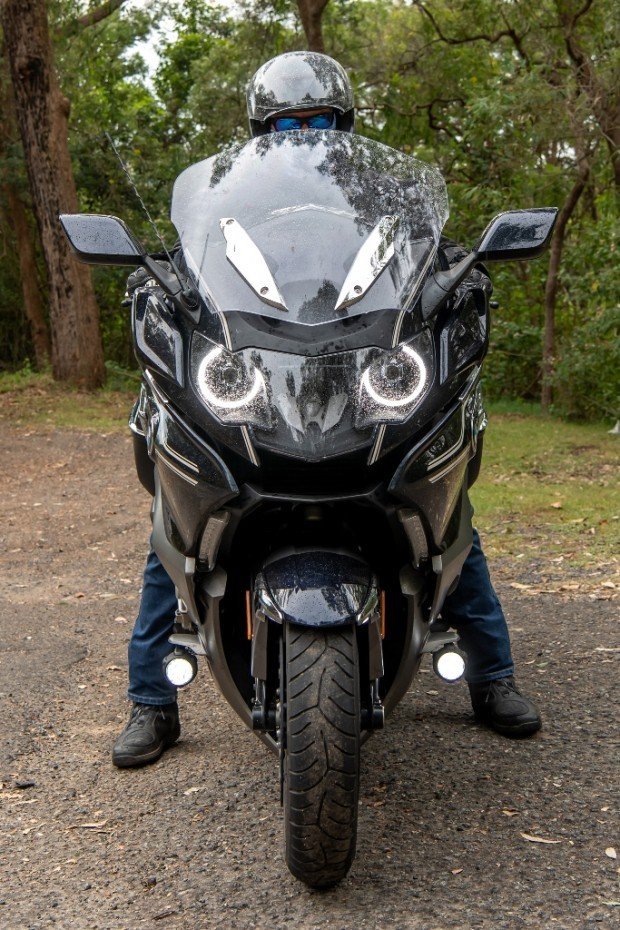 This is the screen fully down… 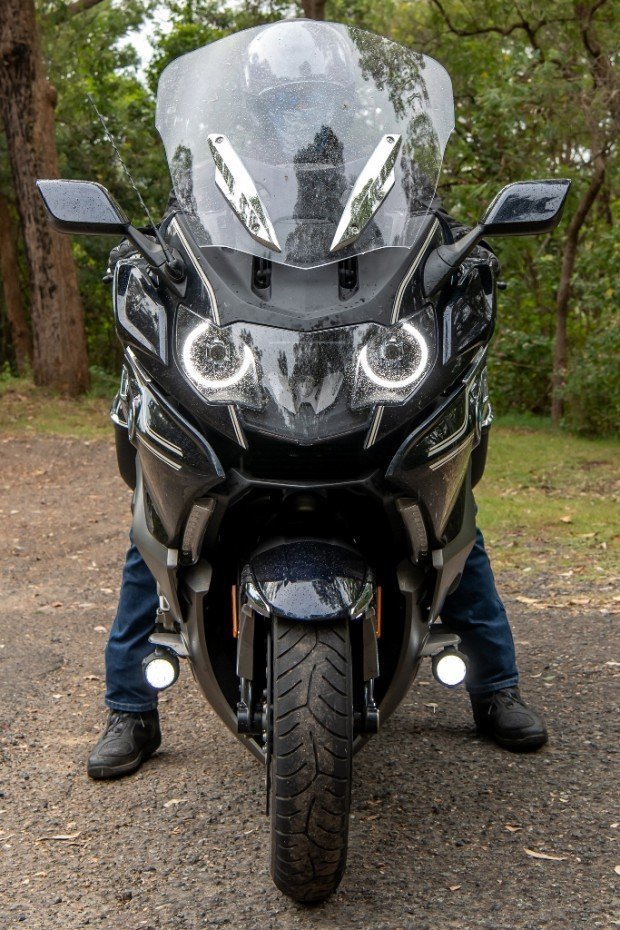 …and this is the fully raised position. Come at me everything.

The only way to stop the chatter is to accelerate to a velocity that silences all speech. All that remains then is rapid breathing and a faster pulse.

And the GTL can do that too.

There is, in fact, very little the BMW GTL1600 cannot do. I’m thinking it would be a handful in an Enduro race, and I reckon it might not float for long. But should sir wish to transverse continents, and (and this is important) arrive at his destination with a pillion who is ready to slip on a little black dress, some heels, and go out dancing all night, then this is the bike for you. 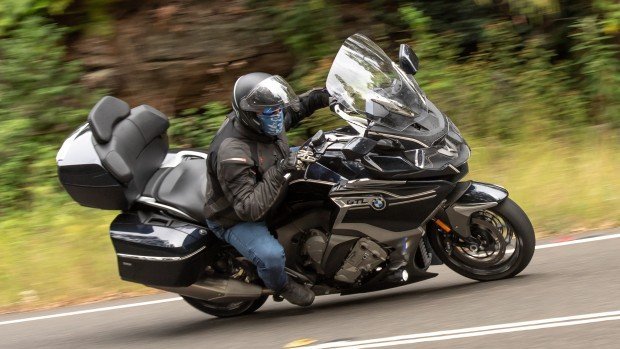 The laws of physics be damned.

“It’s magnificent,” my wife, Lynette, said many, many times during our time with BMW’s touring masterpiece. And she was right. As a high-speed, two-up, touring weapon, the GTL is peerless.

Of course, if you’re not into cosseting your pillion with every luxury, or you don’t pillion much, then you might want to go for the K1600GT or K1600B. Same effortless six-cylinder performance, just without the lounge chair and steamer trunk on the back.

I ride one of these monstrous wonders every year. In the intervening 11 months, I tend to forget how utterly able and splendid they are – and they are certainly that. But Lynette never forgets, and is always asking when I’m going to get THAT Beemer back – the one that makes being a pillion something special. 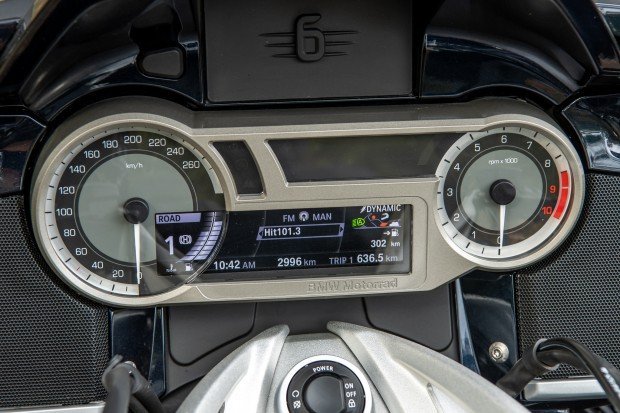 It is elegant and comprehensive, but it is showing its age a touch.

From a rider’s perspective, the GTL is quite an eye-opener. If you’ve not ridden one of these before, be prepared to have your views on big bikes changed.

One would think something this large has no business being able to scratch a bit when the mood takes you. After all, the American equivalents would tie themselves in knots at half the velocities and corner speeds the GTL is serenely capable of. 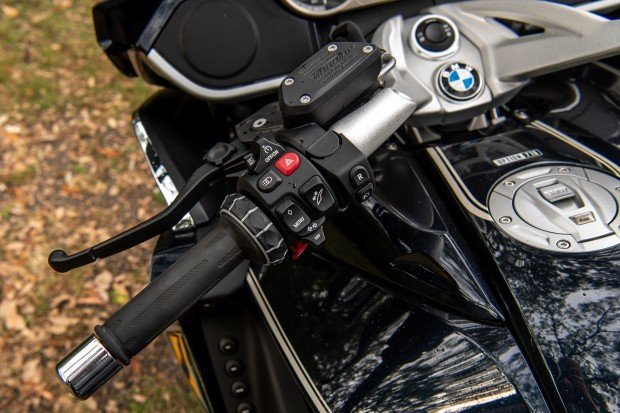 Pretty much the control-room for everything the GTL is capable of.

And it’s a big bike. There’s no getting around that.

It’s 350kg wet. Fully loaded with pillion and gear – there’s 117-litres of storage so the girlfriend can take all the hair-dryers on earth – it’s happy at 560kg. 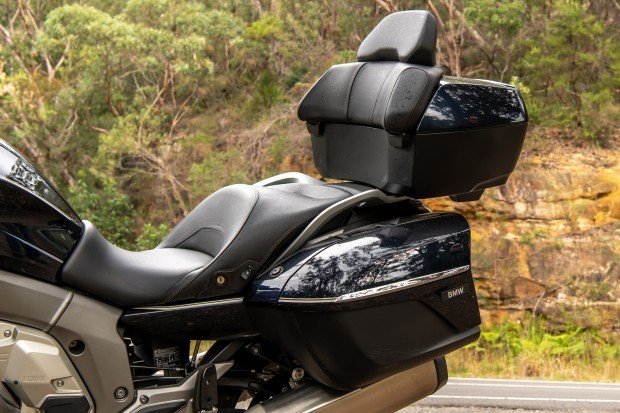 It really is the last word in pillion-comfort and luggage-carrying capacity.

Propelling that weight is BMW’s now-iconic 1650cc, six-cylinder engine, which offers your right hand 175Nm of torque (70 per cent of which is there at 1500rpm), and 160 horses. And it offers it smoothly, and with great majesty.

That’s the over-arching quality of the GTL – it is majestic. 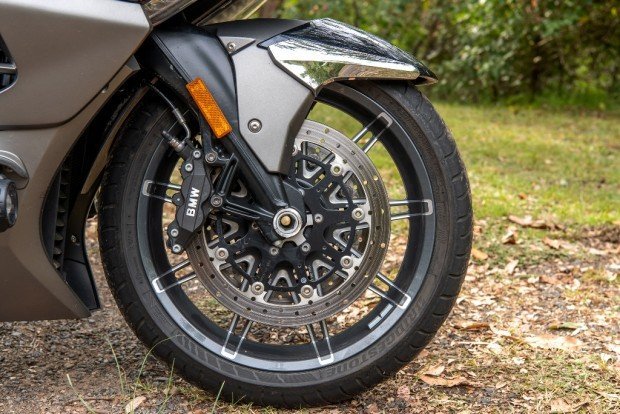 The Option 719 wheels are gorgeous.

Even when you’re being a bit crazy with it, it’s still majestic. And that’s a brilliant confluence of qualities, I reckon.

Shall I list all the things that contribute to its majesty?

BMW Motorrad Integral ABS, ABS Pro, Dynamic ESA, Dynamic Traction Control, reverse gear, LED Lights, coloured TFT Screen, Xenon Headlight, heated Grips, heated seat (can I tell you how much Lynette loved that), cruise control, comfort footrests (they’re a bit wider), comfort turn indicator (I did not know this was a thing until I looked it up, but OK), adjustable levers, centre-stand, electronically adjustable windscreen, Hill Start Control Pro, radio, adaptive headlight, daytime riding light, tyre pressure sensor, keyless Ride, Gear Shift Assist Pro, central locking system, LED fog lights, and anti-theft alarm system. Since mine was the Option 719, I got the most beautiful wheels on a production bike and some killer paint. But there are lots more goodies you can get with Option 719, which is the factory’s bling factory. 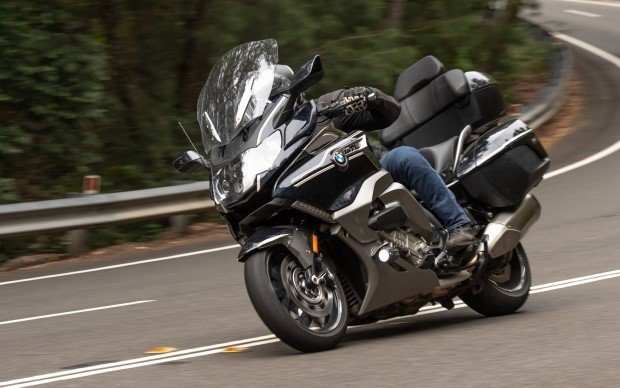 I’m in there somewhere…

And all of that can be fired up the road and through corners with A purpose that will dry your mouth and fry your fajitas. Crucially, without upsetting the pillion on the back.

I took Lynette up and down Mother Putty a few times, and I took her out to Merriwa and across to Willow Tree at a pace that delighted me, and appalled her when I told her about it later. At the time she seemed blissfully unaware that I was looking at serious jail-time if I came across a cop.

I can nit-pick things about it, and probably should, lest you think I’ve sold my soul to the Bavarian mastodon. 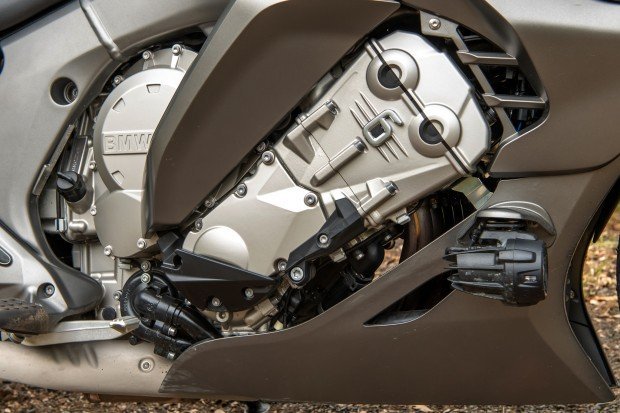 The German six is all sex. One of the finest motorcycle engines ever made.

The gear box is a tad clunky if you eschew the very good up-down quick-shifter. The bike is better at shifting its gears than you are. Live with it.

I saw no point in the stereo. Given the advance of in-helmet electronics, bike stereos have become largely redundant. You can’t really hear them over 120. The GTL’s superb wind-protection does permit reasonable sound-quality up to about 80-90 – but after that, it falls off a cliff. I don’t care about this, since I don’t listen to music much – and certainly not when I’m banging along – but some of you might want to know this.

I’m a little spoiled here, but I also thought the dash was getting a little dated – and there’s lots going on. It is a matter of getting used to the layout, but the market for this bike has eyes that are past their best, so bigger and easier-to-read is the way forward. BMW’s latest brilliant dashes have yet to make their way to the GTL, but I’m sure that’s only a year away. 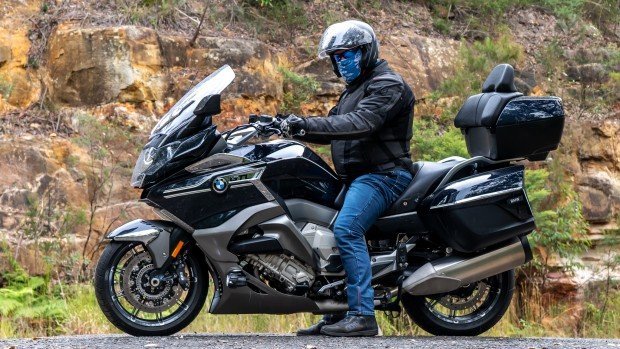 Feet flat on the ground – and just as well.

I did think the electronic suspension adjustment (ESA), which adjusts the damping for you on the move, was slightly nonplussed by rapidly encountering corrugations on a decreasing radius corner, and then I realised it was my bad.

“What are you doing?” Lynette asked as I was performing a U-turn in the middle of nowhere.

“Going back to try those corners again.” 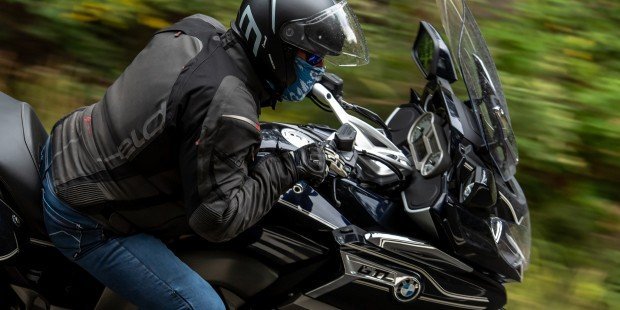 Nick must have been in a tree to get this shot.

“I had the suspension set on Solo. I’m gonna set it on Pillion With Luggage.”

“You’re being weird,” she sighed.

“Look, I told you we were out reviewing the bike. This is part of information gathering to enhance my creative process.” 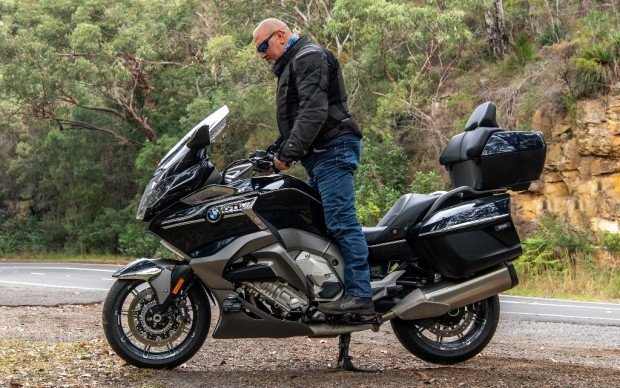 Stand-up ergos are spot-on for Enduro.

“Creatively process your way to buying me a nice lunch, fool.”

I did, but I did the corners again – and the unruffled majesty was unruffled when I pressed the right button.

I cannot identify a better long-haul two-up bike. There isn’t one. Both Harley and Indian make similar bikes in terms of pillion comfort. But neither of them can hold a candle to the GTL when it comes to the big monster behaving like a motorcycle when you need the monster to behave like a motorcycle rather than a design exercise in nostalgia. 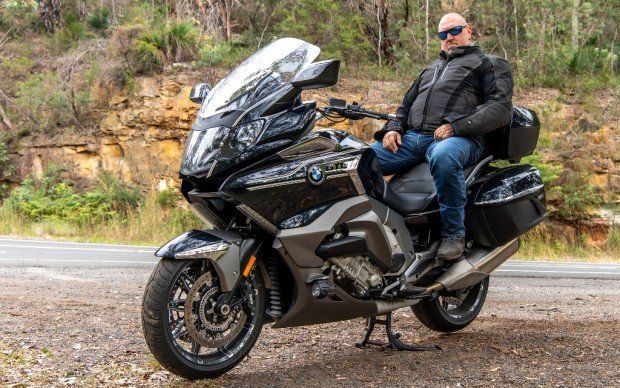 You bought me drinks all night…guess you better take me home now.

The GTL has no truck with nostalgia. This is a modern, trans-continental German weapon – with all the lights, buzzers, diodes, sensors, and computers that that demands. Nostalgia is all about appearances and has nothing to do with motorcycling integrity. And what’s the point of being all majestic when your bike tops out at 160-odd, has the same suspension as a horse-drawn wagon, and brakes off a billy-cart? 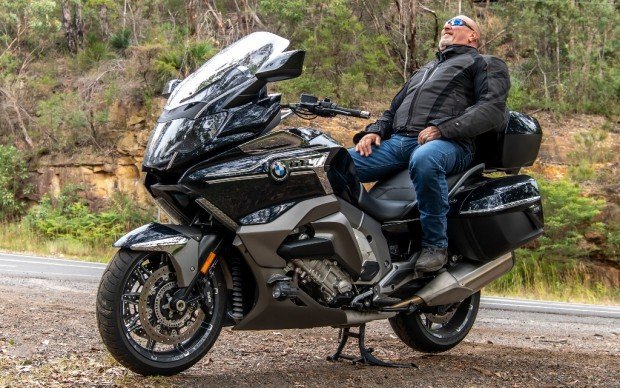 We can laugh about it now. Or later.

How majestic is your pillion going to feel when your American suspension powders her spine with its nostalgic two-inches of travel?

Please. Let us not compare oranges to chewing gum. 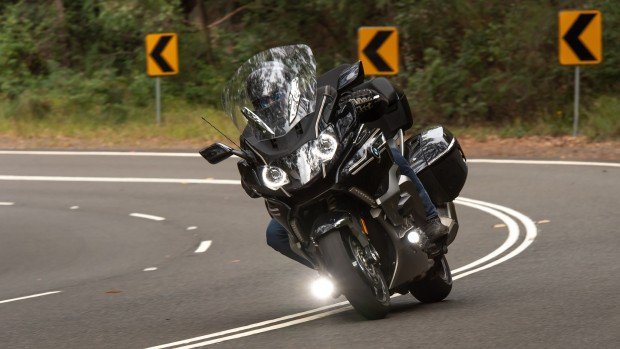 This is as grand as touring gets.

Because it is magnificent.

You may see all the GTL variants and prices by going HERE.