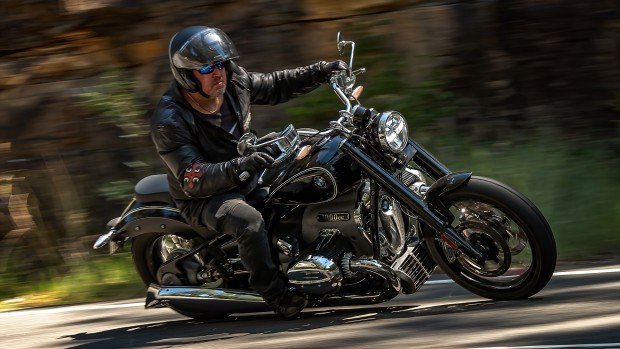 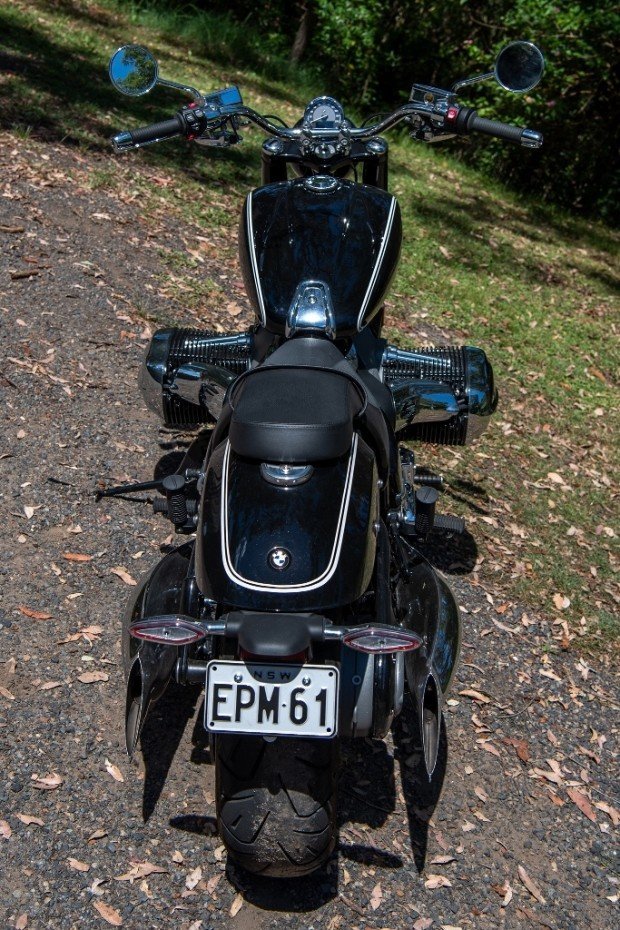 Look at it. This is much a statement of engine as it is a bike.

That such a wondrous motorcycle has been made available in 2020 is a revelation.

That it comes from the fuss-buttoned Germans – whose crazy nightclubs actually put the lie to the view they don’t know how to have fun – is even more amazing.

And it pleases me greatly. And it should, if you’re righteous, please you as well. 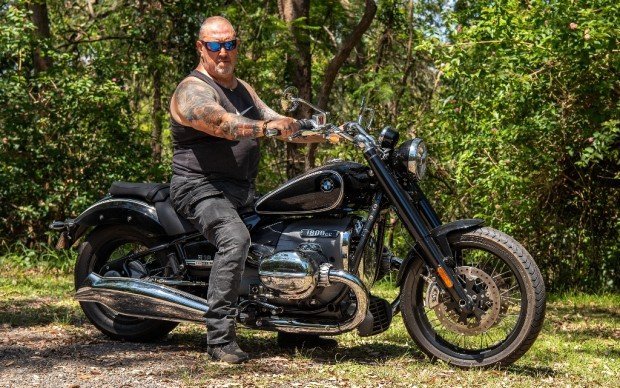 Forget everything you might have heard about the R18. It was probably written by soulless frumps who have forgotten what motorcycling is, and how it must sing to you.

The R18 sings – and it sings a special song; a song that is pure motorcycling.

So with that in mind, permit me to quickly set things to rights. 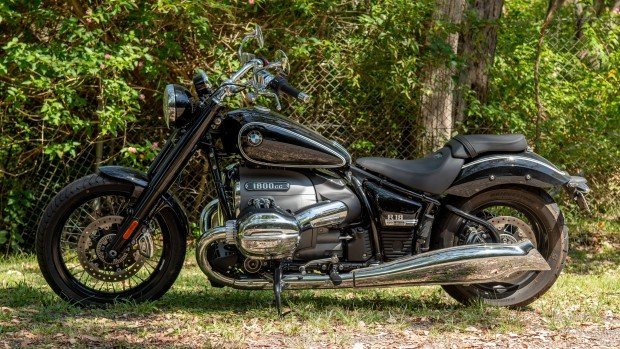 The R18 is not a cruiser. Your feet are not facing forward – which is what makes a cruiser a cruiser.

The R18 is not copying Harley, or trying to look like a Harley. Do you imagine BMW is stupid? Can you imagine a development meeting where Hans says to Dieter: “Dieter, let us machen zi copy of zi Fhet Junge, ja? It vill sell like crazy, ja?” 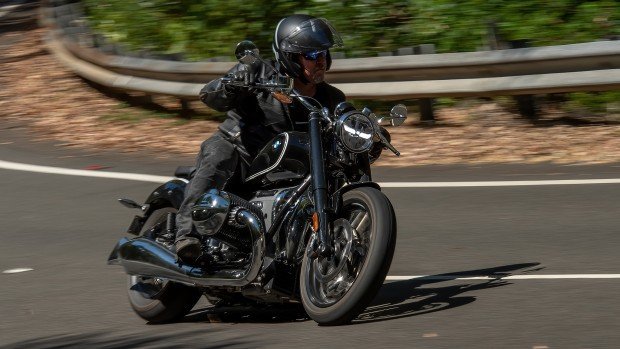 Stable as the German economy.

Stylistically, the R18 is actually an homage to BMW’s 20s and 30s, when it created the gorgeous R32 and R5. Back then all of them were painted a very dignified and orderly black with perfect white pinstripes. 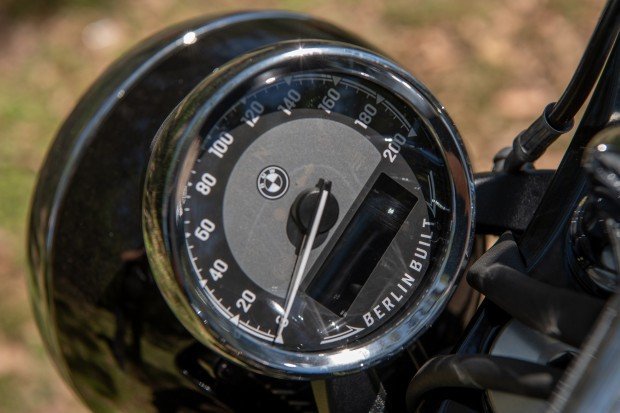 You really should check out the nightclubs. They build them well, too.

But back then, the world could not even imagine a boxer engine of 1800cc gronking out torque that would gut mountains, and which shuddered like an earthquake at idle.

And the R18 is ALL about that amazing, astonishing, and overpowering engine. You can never NOT see it, even when you’re riding it. It is so awesomely vast it is always in your peripheral vision. You will see it even when you’re not looking at it. 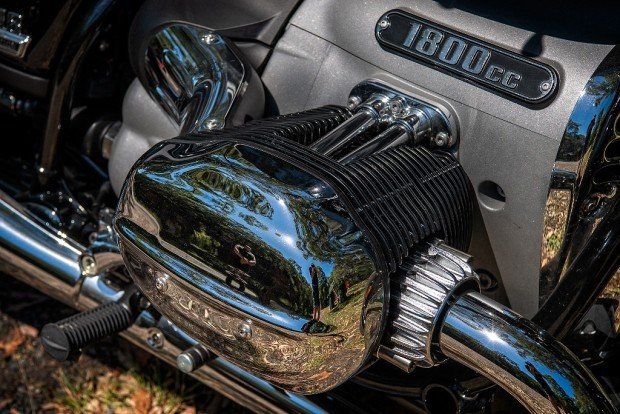 That there is bigger than an MT-09 motor. There’s another one on the other side.

RIGHT IN THE FEELS

I care only about how riding the R18 made me feel – and it made me feel marvellous. Here was a bike that oozed sophistication and class. Yet, at the same time, it shook ponderously at idle, and heaved itself viciously to the left each time I pressed the starter button. The engineering that must have gone into making it do that blows my mind. 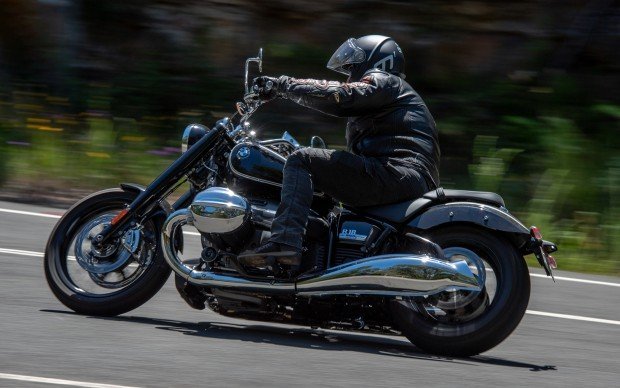 I was proceeding with elegance sans sparks.

The R18 is the only BMW where you must hold the clutch in to start it. This is so both of your hands remain on the handlebars when it does its “Cop this for a start-up” lurch.

I took it to the Grey Gums a few times and let some interested punters sit on it and start it. And then we all laughed at their reaction.

The whole thing is utterly engaging. It’s visceral. The animal part of my brain throbbed in pleasure each time I thumbed the starter button. And it continued to ‘eeep’ in satisfaction each time I rode the R18. 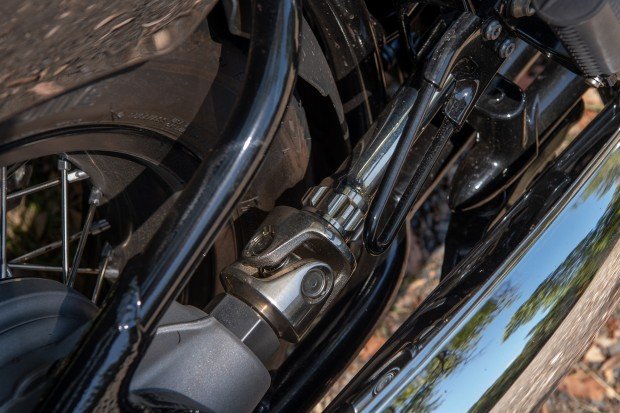 BMW dares to bare the shaft.

It is, of course, elegantly smooth at pace. But that organic thrum is always there. And it sounds pretty good, too.

Here’s me cloaked in the view that no BMW boxer twin would or could ever sound or be made to sound good. Or meaty.

It seems the solution to that was to create an 1800cc version – each cylinder the same size as the old Z900, and bigger than the MT09’s entire donk.

ROLLIN’ WITH THE FLOW 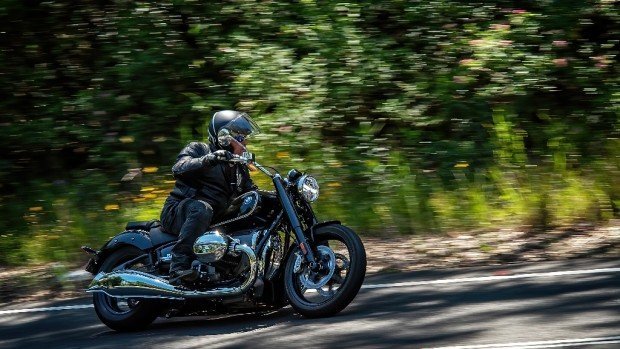 Blurring the green is always fun.

It rolls easily through bends, constrained only by a limited ground clearance. Its roll-on is brilliant, so overtaking and shaming HOG members is very satisfying. The suspension is not adjustable, and I didn’t find it needed to be. The ride is neither firm, nor plush, but that happy in-between that tells you the suspension is very well-sorted and the front works in concert with the back – unlike some of that American stuff where the front-end is playing blues and the rear is making orange juice.

The brakes are linked, but only off the back pedal. Which settles the beast wonderfully when you’re doing twisties. It doesn’t much matter, though. There’s no knee-down thing here, pilgrim. You won’t be needing them Stylemas. The R18 is beautifully mannered in bends, and it likes ’em. It just lacks the ground clearance you might wish for if you’re up against a sportier bike. 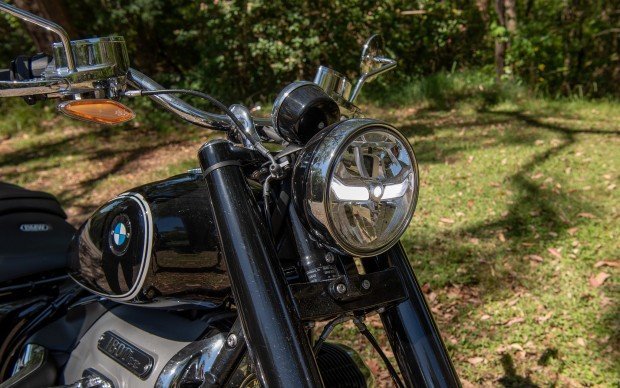 I liked the running light, and it had a good flat and wide spread of light at night.

I was entirely caught up with the sheer classiness of the R18 – both in terms of how it rode, and indeed, how it looked. Small, but important styling cues iced that cake for me. 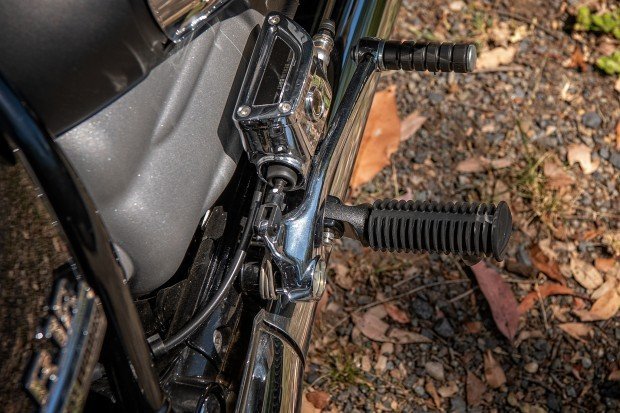 That killer-looking slash-finned muffler would not look out of place on an old Velocette, and it does emit a deep and pleasing burble – especially when you get on it a bit. ‘BERLIN BUILT’ is writ large and proud on the analogue clock and brake reservoir. The shaft-drive is exposed and nudity has never been so sensually industrial. Even the ride modes are called special things – Rock, Roll, and Rain. Mine lived in Rock all the time. I also loved the way it lurched when you down-changed coming into a bend, and its computer is always advising it not to compression lock you into the trees, so it’s not hauling you up with tonnes of engine braking. You’ll work it out, don’t worry.

The only limitation I found on the R18 was its seat.

No, the cylinder heads did not cook my feet. And no, I had no trouble accessing the rear-brake pedal. If your feet are the size of the Manly ferry then you might. But then it serves you right for being so mishappened. 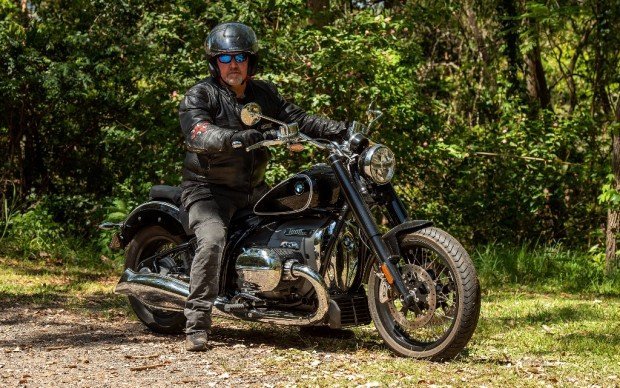 I’m looking at Nick crying because chrome makes it hard for him to not appear in the picture as well.

If you’re very tall and lanky then you might feel a touch cramped. I did not. But I did not want to take the R18 touring either and that was entirely due to the seat and not the riding position – and even if you could fit highway pegs to it (and you can’t), it would not make any difference. The seat is just too hard. It’s fine for an hour or so, and around town, but I did spend some six- and seven-hour days on the R18 and I would glare at the seat in grim bum-numbness when the sun went down. BMW quietly agrees, because it does not have a cruise control on it. There is, of course, a comfier saddle option you can get out of the accessories catalogue, so it’s no biggie. 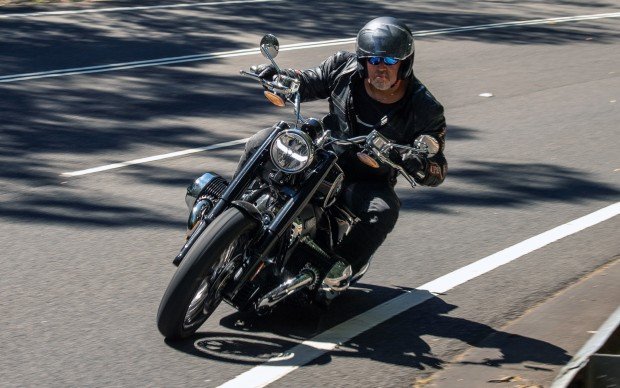 If only we had alps.

Look, the R18 is not for everyone. It is not one of them universal bikes that does all things and goes all places. BMW makes several of those if you’re into the marque.

The R18 is its own thing. It cannot and does not compare to any other bike – and attempts to do so are altogether pointless. It is so wonderfully unique it deserves every sales success it might get – albeit I have my doubts the narrow-minded and very conservative Australian market is where that will be.

But it really should be. 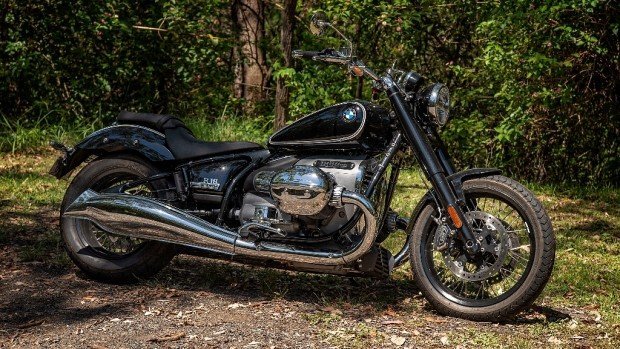 The seat is cruel, but the rest is glorious.

There is no other bike on the market right now that so elegantly marries serious old school cool with 2020 tech, reliability, and performance. An 1800cc boxer twin? Ladies, please.

It’s really quite a feat, and one has to applaud that.

And the R18 is also a bike that is very much needed, if for no other reason that to remind us what a true visceral riding experience is all about.

YOU MAY SEE ALL THE SPECS AND OPTIONS HERE