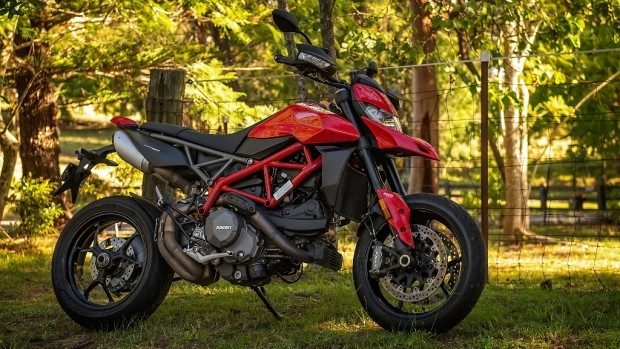 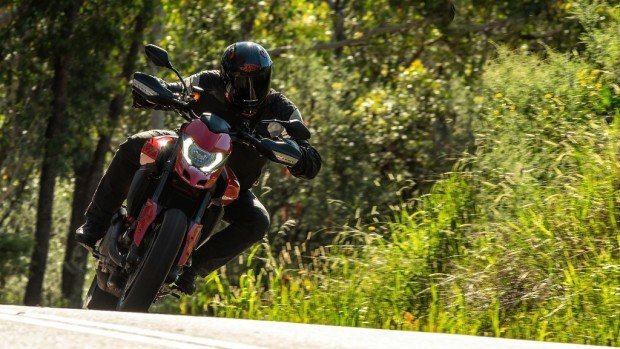 That’s not the green, green grass of home. Just sayin’…

A long time ago, I had a mate called Art.

He was evil incarnate. The ultimate accessory before, during, and after the fact. A dark enabler of the highest order.

We’d be in a pub somewhere, and I’d catch a glimpse of his gold tooth. He’d be grinning like demon and slowly drumming his tattooed fingers on the dirty table.

Then he’d suggest… a thing. A thing that always involved some anti-social motorcycle nonsense.

Art was a boon companion for murky deeds; the leering bastard who’d whisper assurances when you had doubts. 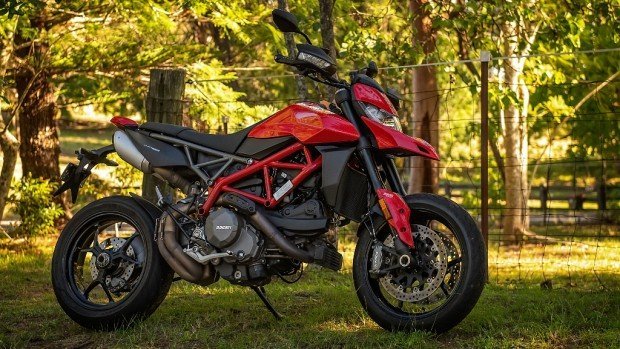 A grinning facilitator for the ruination of your soul.

The 2020 Ducati Hypermotard 950 is Art reincarnated as a motorcycle.

I knew this the moment I laid eyes on it. I knew this even at my advanced age – an age that warned me motards were a young man’s game. And a Ducati motard, the Hypermotard no less…well, Hell…what business do I have even looking at that section of the bar…erm, showroom? 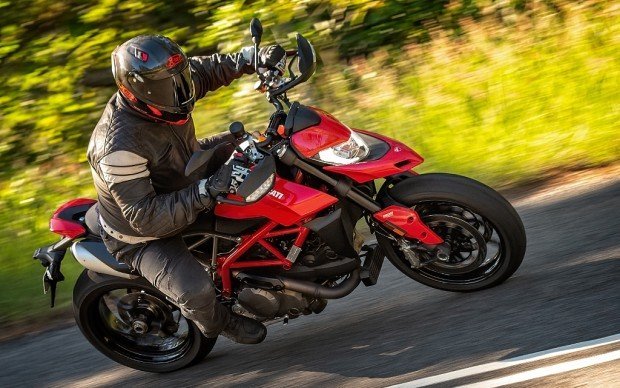 “Is this a Highway Patrol convention?”

But all men love motards deep down in the shadows of their hearts. These are bikes which speak to our devils. I am no different, and the Lord knows I have me some devils.

Ducati’s centrefold-red Hypermotard had my gibbering mob by the throat, and they were paying attention. Their pointy ears were up and their slitted amber eyes glinted.

The very idea of a motard is motorcycling incarnate. A light, agile chassis wedded to an oomph-filled engine, and an attitude that forces you to seriously consider leaping it off a wall while escaping from the police. 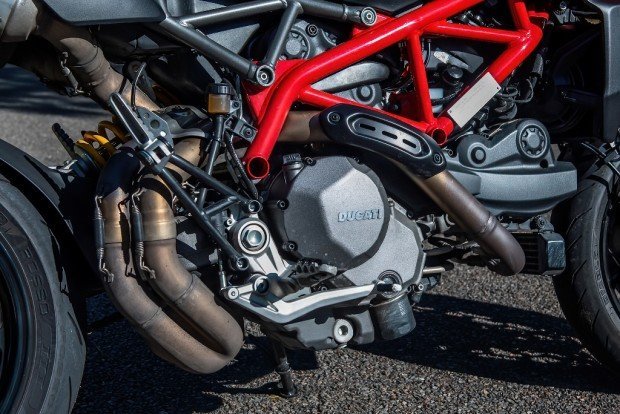 A gold star for the most complicated conglomeration of exotic metals ever.

And no-one does motards quite like Ducati does.
This is not a dirt bike with road wheels and tyres.
This is its own purpose-built “thing”. 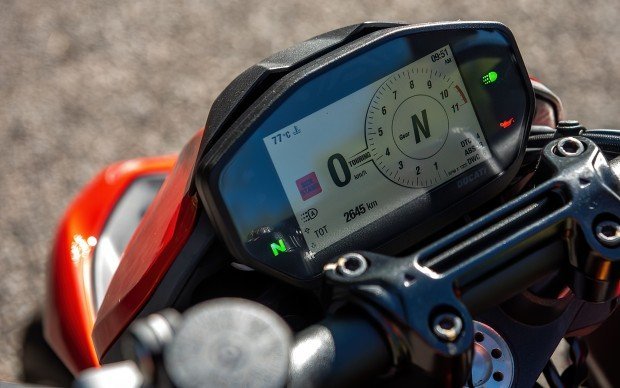 Basic, informative, but no Netflix.

The fuelling was spot on. It fed me 96Nm, belting its 178kg (dry) and me off three grand like a two-am backhander. I sat on it like a demented ape, high and proud with my elbows up like a true motard-beast, and I did not once curse the seat. There really is no need for motorcycle companies to inflict buttock-cruelty on us in 2020, and Bologna understands this for the most part. You can actually put in a long day atop the Hypermotard’s bum-vinyl, and no-one was more surprised about this than me. Yeah, you will feel like you’ve been for a ride, but you’ll be walking unaided into the pub. That’s a good result in my world. 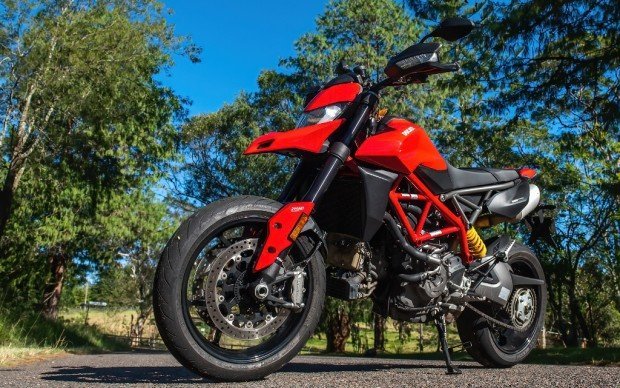 Pure Bologna DNA – no doubt about it.

The handling, which is sharp and fast, as it must be, did take me some time to absorb – probably six or seven corners. And then it was all fierce intent.

“It’s a Ducati,” I would tell myself each time I felt somewhat over-committed approaching a corner. “It’s handling incarnate. Shut-up. Jesus hates a pussy.” 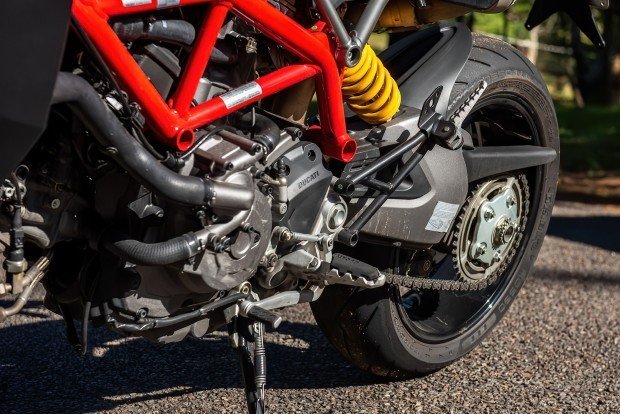 Sachs monoshock is fine. Seriously. It’s better than you. But the SP has Öhlins. And carbon-fibre.

And so it went. Every time. I never wished the Hypermotard would do anything “better”, but I often wished I could.

I found it tall (870mm), and you do sit very much “on” it. So care must be taken when you’re paddling it around parking or doing slow, feet-down, spasmo U-turns. I had a brief slippery moment when the whole carnival came close to setting me on my rump and falling atop of me. But that was just me being short and fumbly in that lurching moment when I have to do an illegal U-turn (not in front of a Highway Patrol car), and ride back through a corner so Mr Edards can make a photograph. 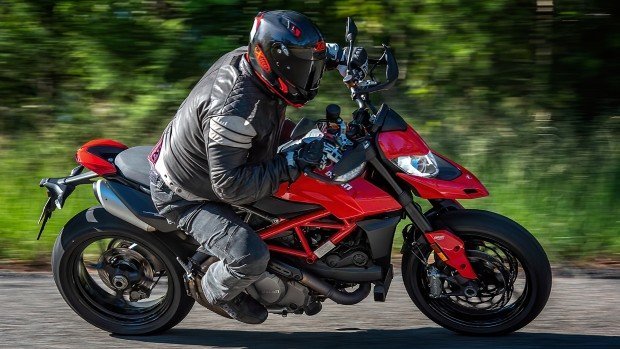 Only the pillion will be cramped. Matter for her.

You get three riding modes, Sport, Touring, and Urban. Sport is for high holy days when the force is with you and you’re riding like a supercharged spider monkey.

Touring mode is where most of my time with the Hypermotard was spent. It offers a notably smoother power delivery (still the whole 114 horsies), and that delivery made my manic inputs less terrifying. So maybe the former mode before lunch and the latter after lunch. Or vice-versa. Only you can make that post-hamburger call. I tried Urban mode briefly and then ignored it, because it’s not the boss of me. 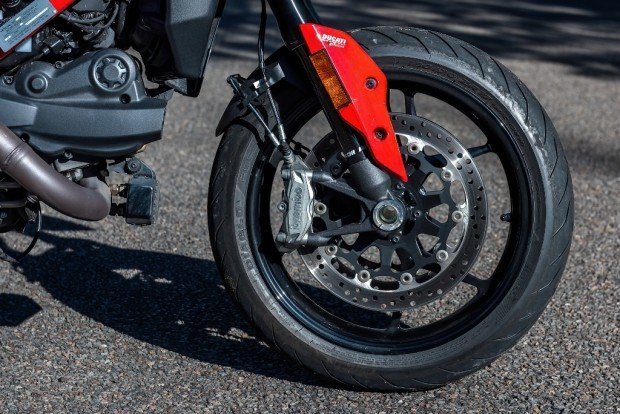 Must I tell you how good these are? I think not.

Polishing this arsenal is a goodly suite of electronic assistance – Bosch Cornering ABS (in six axiseses), as well as Ducati Traction Control (DTC) and Ducati Wheelie Control (DWC). Which allegedly stops you back-flipping the bike while courting young ladies. 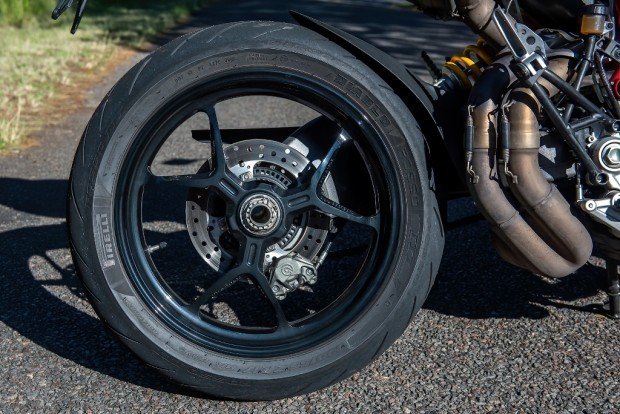 This is an optical illusion. The rear wheel does not just float in space.

Art used to do that to me all the time. He was very good at it. He assuaged my self-doubt and made me feel like anything was possible, even if it was immoral, illegal, or mortally dangerous.

Because if we didn’t caught and we didn’t die, we’d laugh about it afterwards. 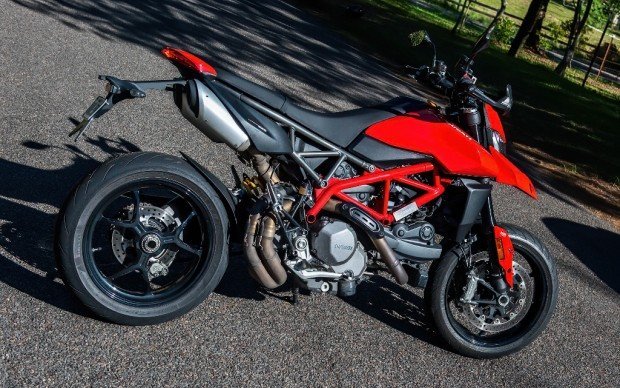 Nick must have been falling over when he took this one.

I spent a lot of time laughing on the Hypermotard. Each time I’d put it through Mother Putty’s Ten-Mile snake-bite, and when I’d glance at either the entry speed or the exit speed, I’d be appalled and delighted. And that’s precisely what riding bikes needs to deliver in equal amounts. If it doesn’t, you’re maybe doing it wrong. 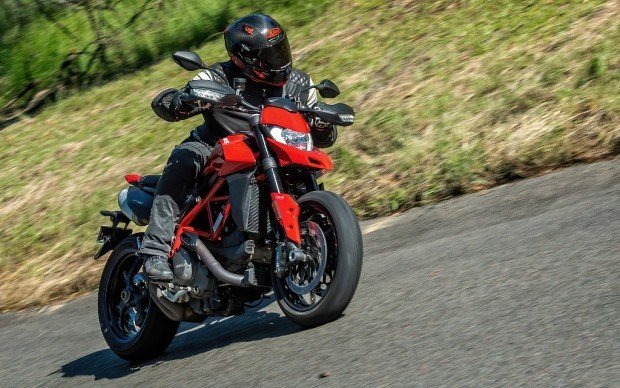 Damn…this carpark is smaller than it first looked.

Does it need more power? Oh…you’re one of those chieftains who feels a 290km/h top-end on a motard is the deal-maker? Sorry. You’re going to have to make do with the shamefully low 200s. Too bad, so sad. Maybe buy a Panigale?

The Hypermotard is not for everyone.

It does not pretend to be. 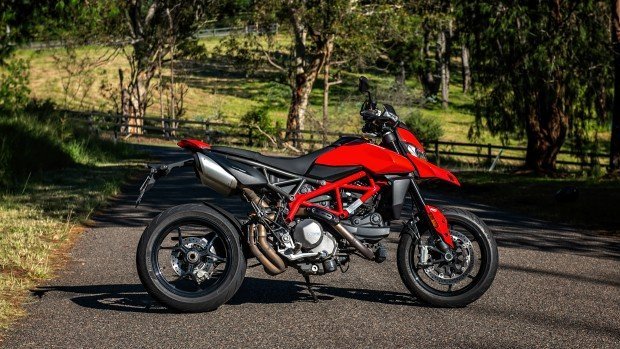 “Stop beeping your horn, lady. We shall move it soon.”

This is a bike with ferocious intent built into its superb DNA. It is the third of its name and an all-new make-over of the previous 939.

It doesn’t compete with anything. Not really. It is very much its own thing.

It commutes with elan. It scratches with purpose. It tours with a cheery and ever so vague nod at your ageing flesh. You can’t strap anything to it, and your pillion will not spend her time relaxing. I would suggest not taking her. You’ll only dilute the experience, and no-one’s day will be sunshine. 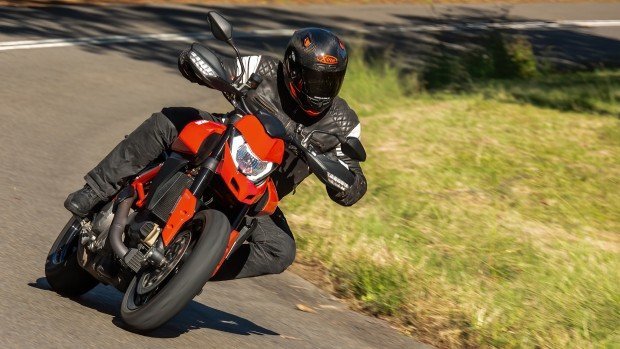 Fierce and fast. Not me. The Hypermotard.

So it does all of that.

But it does so much more as well.

Just like my old mate, Art, the grinning evil of my youth – the Ducati Hypermotard 950 is the embodiment of the cackling in my head.

Yeah, just lead me on. 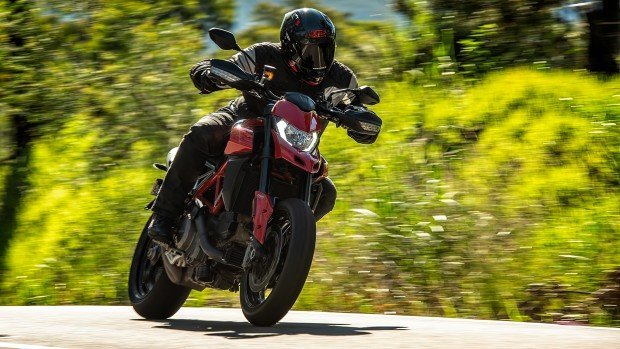 I am easily led.

Hypermotard SP $26,600 Ride Away – The SP is the tricked-up, carbon-fibre-lashed, Öhlins-informed variant. Yes, I would spend the extra bucks. But that’s me.

DO THE CONTROLS FALL EASILY TO HAND?

Of course, but you have to drop them just-so.

WHAT’S THE CREAM-LEVEL OF TORQUE?

A small herd of Holstein-Friesians would be jealous.

GLISTENING PAINT – YES OR NO?

Ducati Red does not glisten, you animal. It sears.