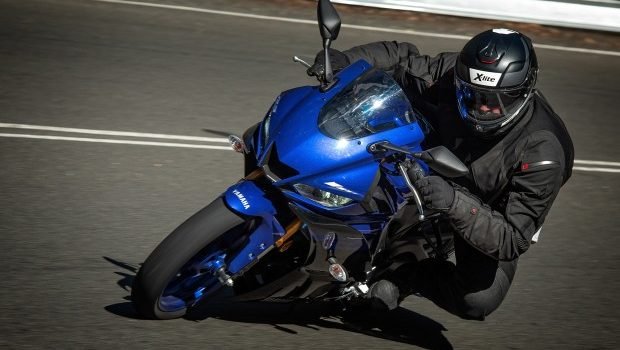 I have had this marvellous little bike in my possession for a while now. And I guess it’s possessed me some as well. And that, friends and relatives, I did not expect.

We have had some times together, me and it. Each time I ride it, I turn into a bit of an idiot. A man my age has no business belting around on a screaming R3 pretending he’s Arbolino chasing Antonelli around Mugello while he’s actually hammering the Putty Road and looking for kangaroos to miss.

Except he does. You know why? Because the R3 is a race bike. It’s got those insane Dunlop Alpha 14s on it. It handles with a finesse and ability only race bikes possess. Crazy corner speeds and lean angles are what it’s about. Me? Well, I’m not as much about those things as I wish I was, but that don’t matter as long as I think I’m banging.

And I am banging. In my own humble way, I am revving three billion bastards out of, picking my entry points into corners, staying on the gas (keepin’ ’er lit, as it were), and jizzing all sorts of happy chemical neurotransmitters into my neuros.

I even forget it’s a LAM. Like, it doesn’t matter. Let the ignorant ride the normal blanc mange LAM offerings. The R3 is not of them. It is its own thing. It’s light, it revs, it handles, it does everything it’s supposed to do.

The fact you can’t see shit out of the left-hand mirror except your arm is irrelevant. The right-hand mirror suffices.

L-platers, who should be buying these things like pingers at a doof-doof, shelving them, and screaming through the night seeking redemption and meaning to their empty teenage lives via motorcycles, are not my concern. It’s not like they listen to us old warhorses, anyway.

I’m of the view even experienced motorcyclists, those with darkness in their hearts and disillusion in their souls, need to ride one of these. They cost bugger-all, in real terms. And they give the rider so much of what riders want and like and lust for when they’re buying bikes which need to be governed by computers so they don’t kill you when you stuff it up.

Don’t worry. The R3 will kill you just as dead as an R1 if you stuff it up. But your chances of stuffing it up are so much less at ten-tenths on the R3 than at five-tenths of the R1. And if you’re riding an R1 at ten-tenths, then I salute you and will enjoy seeing you race ASBK some time soon.

But if you’re just an average mug like me, then the R3 will tick every go-fast-go-hard box you have. Because it’s all about corners. That’s where the cackling demons live. That’s where riders see God. That’s where our religion waits for us. Corners nourish our souls. Corners feed our passion. Those banal twists of bitumen that just sit there, baking in the sun, doing nothing, are the paths of joy the second you put a bike into them.

This bike. This glorious little R3.