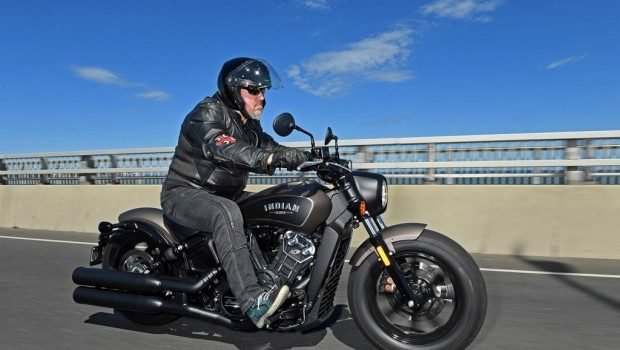 When Indian first served up its Scout a few years back, I was a little disenchanted. Much like I am when a craft beer lets me down by being too much about craft and too little about beer.

I liked the Scout – it went well enough, was nice and low, and came painted in calm, non-threatening colours.

In short, it was a beaut little around-town cruiser, with a total cracker of an engine, but all the outlaw appeal of picnic blanket – which is what I was disenchanted about. 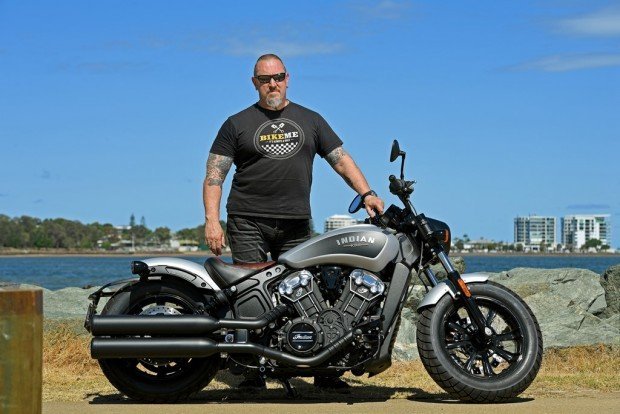 My disenchantment has gone and been replaced by mongrel-love. 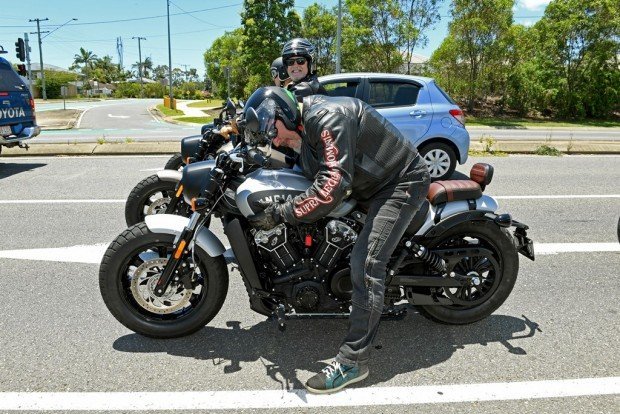 My brother Neale Brumby is always amused when I rub myself against a motorcycle.

There was so much potential in the Scout. That much was obvious. That motor was a bona fide gem, and the Scout had a unique visual profile and some very cool styling cues. So I viewed it, like I view every American cruiser, as a blank canvas and imagined the things I would do to it to mongrel it up some.

Then some terrible things happened. The usual people who could be relied upon to inject proper custom attitude to motorcycles like the Scout were banned by the police. One percenters suddenly had far bigger fish to fry than creating cool custom bikes and putting on bike shows.

And seeing as how nature abhors a vacuum while also enjoying a comedy show, bearded, girl-jean-wearing bugaloos somehow became the self-proclaimed banner carriers of customised motorcycles.

But thankfully, the Indian Scout eluded them. 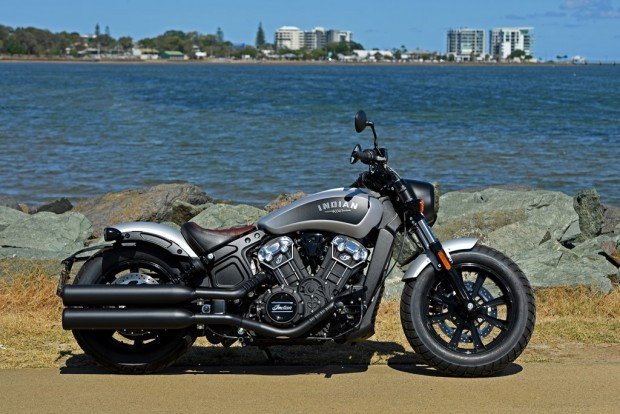 Such a huge stylistic improvement. 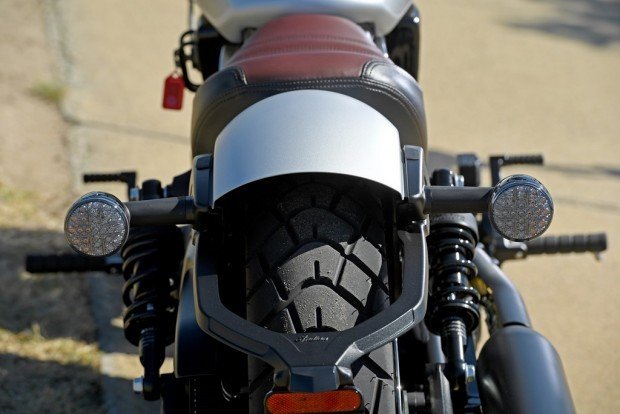 Number-plate holder? Pfft. I was the only person on the launch who understood this was a grab-rail for your mates to hold while they skied behind your bike. Oh, and the blinkers double as stop-lights.

They didn’t “get” the Scout. It was, after all, a brand new motorcycle with a legendary name, which at some stage had ruled everything from board-tracks to the Walls of Death and the Bonneville Salt Flats, so it was beyond them. And while the usual exhaust-wrapping, dirt-tyring, and headlight-taping continued to be inflicted on unsuspecting Hondas and Yamahas, the Indian Scout had happily escaped their dreadful brown attentions.

But there was one bloke who was doing wondrous things with the Scout. Johnny Gee from Antique Motorcycles in Melbourne is a man who understands motorcycles and the proper customisation thereof. You only have to look at the stunning custom Scouts he has built and the way his pants fit him to know this is true. 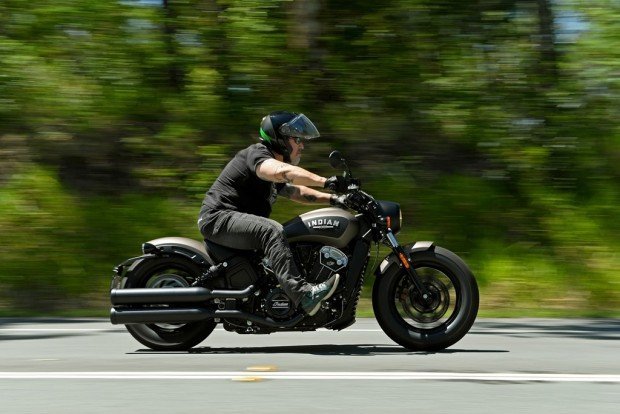 The ride position is pure folding-knife. It’s fine for short to medium hops. But maybe small apes if you’re going to spend longer in the saddle.

So I was not alone in seeing the potential in the Scout.

And now, the good folks at Spirit Lake HQ have finally decided to exploit that potential – and in the process of injecting a good dose of visual nasty into the model, have also created a much better bike than the original Scout because they also addressed some shortcomings in the original model.

The Scout Bobber is not about “vibes” and “beats” and “murdering out”, or any of that feel-good, pants-dropping, nothing-to-do-with-riding bullshit. 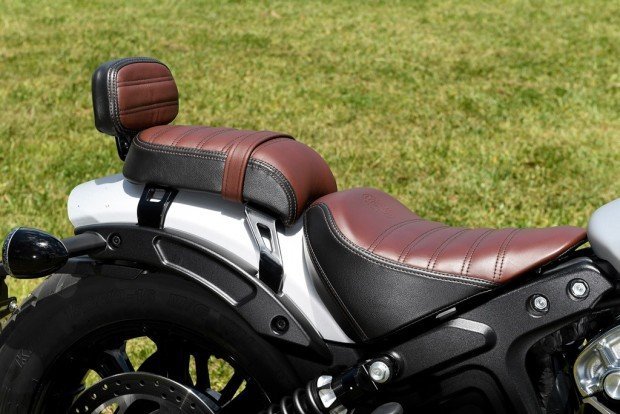 The seat is more burgundy than brown, thankfully, and is reasonably comfy. Pillion comfort is sparse and plus-size models need not apply.

The Scout Bobber is about the factory starting to expand on a solid platform by addressing stylistic and suspensional misgivings on the original Scout.

Indian has put a chain around the neck of its cheery puppy dog and set it out front of the junkyard to chase away thieves.

And when you ride it, you know, in your waters, you should be on your way to a big night of neck tatts, strippers, and friends in low places. 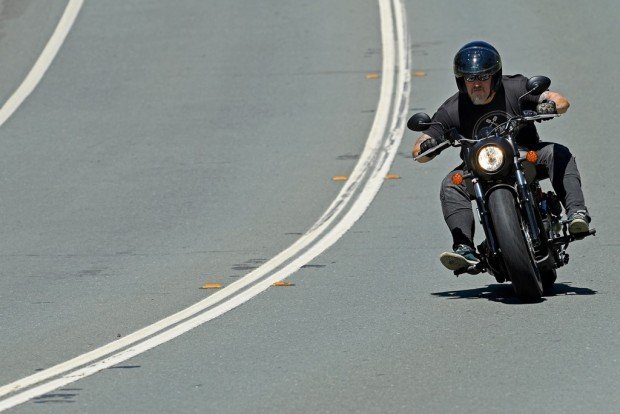 “That table-dancing bar is just up ahead…”

It’s lower (26mm) and the footpegs have been moved 38mm closer to the rider, its guards have been hacked away, the handlebars are wider, its got a neat new headlight nacelle (this alone has improved the look of the bike out of sight), new exhaust, gauges and seat (offering better comfort), and the entire riding position has become more aggressive to go with all the lovely black paint so much of it has been dipped in. Even the tyres have been aggroed up some, but until I spend some time riding it in the rain, I’m not going to sit in judgement on that. The hoops look pretty cool without transcending into high rubbery farce like so many smashed-avo creations. 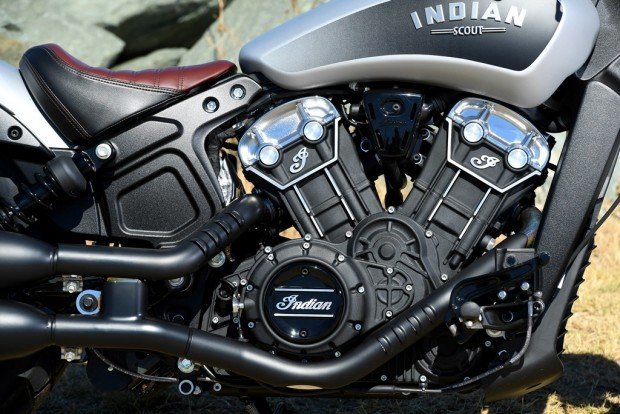 The engine has been a gem from Day one, and remains one of the most pleasing and rewarding V-Twins on the market.

And it also comes with much improved damping on the front suspension thanks to the new cartridge forks. The Scout has always been happy to turn into corners – far better than you’d expect something with two 16-inch wheels and 29 degrees of rake to turn, and the Bobber is just as keen – though you will find your pegs kiss the tarmac a little earlier thanks to a slightly reduced lean-angle.

It’s a surprisingly sweet-riding package. The clutch is light, the soft-action throttle responsive, and the gearbox is positive and smooth without any medieval clunking.

And remember, this is a proper ‘power cruiser’ (94hp and 97Nm) in the vein of Harley’s departed VROD. It will, in fact, do a VROD over the quarter. And if Indian takes the next step and puts a giant fat tyre on the back, success of the model named Scout Bobber Fat will be assured.

Rest assured, it goes quite hard when you start winding it up.

On the launch I rode the Bobber around town and did some easy bend-hammering just outside of town – so pretty much what any owner would do. 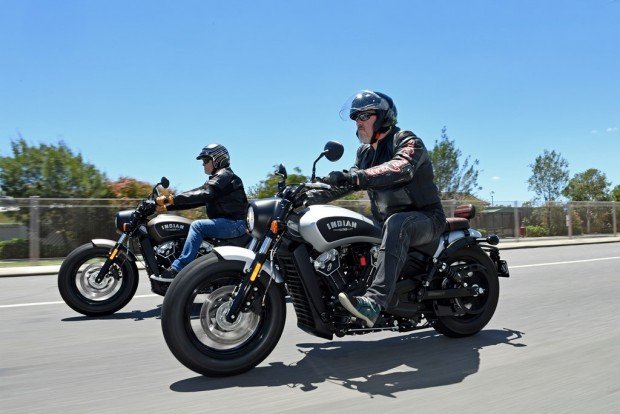 The Aussie market gets normal mirrors. Other markets get bar-ends. Which are pretty sweet.

But if you wanted to tour, then go ahead. It’s just so doable and riding Scouts did not stop some owners making the five-day run to Alice Springs with me two years ago. Petrol conservation is a priority, of course, but then you probably won’t be doing 180km/h. Look to maybe get 140 klicks out of a tank.

I rode the Fox-shock- and Stage-One-exhaust-equipped Bobber as well as the stock model and without hesitation I would spend the extra dollars on the aftermarket shocks and mufflers. The tweaked Bobber sounded lovely and the rear suspension was improved out of sight. Given the Scout Bobber is already a very well sorted bike, you’ll be impressed how much better it is with the Fox shock.

I very much like where Indian is pointing its guns at the moment. It’s painting more things black and expanding its Dark Horse line-up, and it’s got a stunning player at the big end of Tourertown, the Roadmaster Elite.

With the advent of the Scout Bobber, I reckon it’s got the American powercruiser segment nailed. 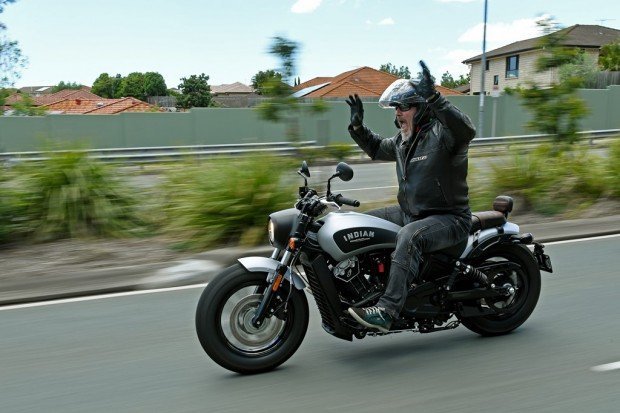 “OMFG! Look at the size of that strip club!”