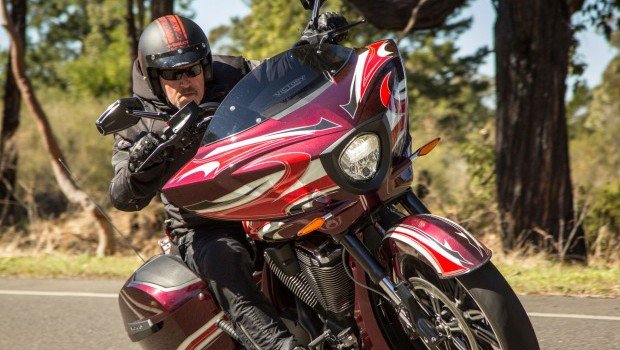 When we began the Victory Magnum’s transformation into the Magnum Opus Thunderbastard some months ago, there was some furrowing of brows.

Editor Brum furrowed his and I furrowed mine. I’m pretty sure the folks at Victory were furrowing theirs as well, but for entirely different reasons.

Two quantifiably unhinged lunatics had got their hands on a $32,000 motorcycle and were drinking heavily, ordering things on the Internet and sending the invoices to Victory. One can well imagine what kinds of discussions were occurring around the Victory corporate table.

Brum and I were having our own discussions.

“Chrome?” I said to him. “Bitch, please. Chrome is for men with firm buttocks and pomade in their hair.”

“But I put big rotors and apehangers on it!” Brum replied. “Apehangers are the most manly thing you can put on a motorcycle apart from me.”

I allowed this to be true. 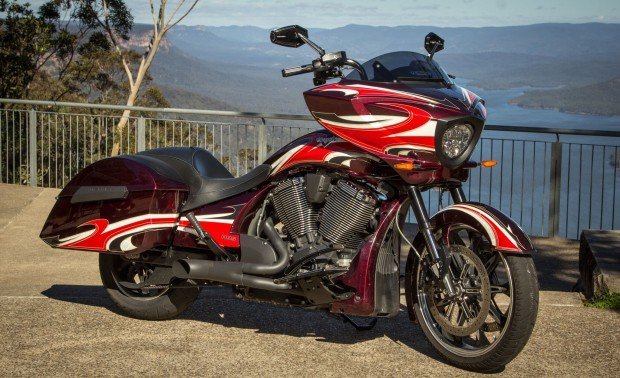 Here it is with added black bling. The only kind of bling. 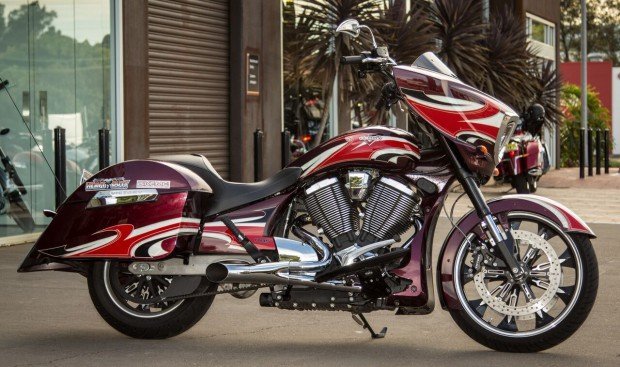 Here it is before we took to it with darkness in our hearts. Note the unpretty swingarm can no longer cut into your eyes.

“Good point. The rotors were a great call. The difference to the braking is very noticeable. But chrome is far too cheery. It sparkles in the sun and reminds people that happiness is possible. I will have none of that.”

“We must discuss this at length,” Brum insisted.

“We can discuss it all you want,” I said to him. “But the bike is in my possession, and I have found a like-minded soul in Chris Papas (Service manager at the Victory dealership in Sydney). He orders shit off the Internet better than a nine-year-old girl. And, most importantly, he has a direct line to Victory’s own aftermarket bling, which happily comes in not-chrome as well.”

“What are you going to do?” Brum demanded.

And that’s pretty much what happened. 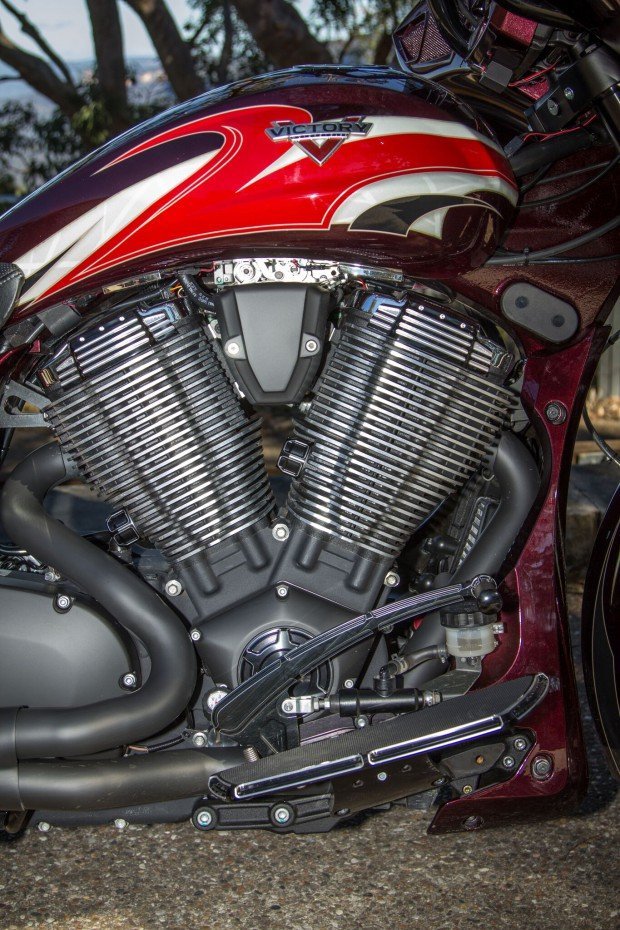 There’s a lot going on here. Note the different rocker box covers, the sexy new brake lever, footboards and black whatever you call that thing in the middle between the cylinders that covers the fuel injection. 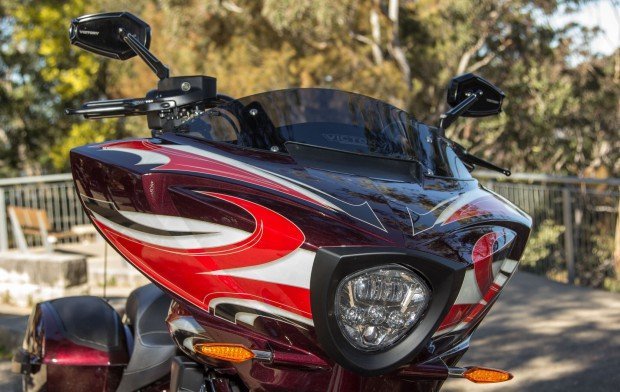 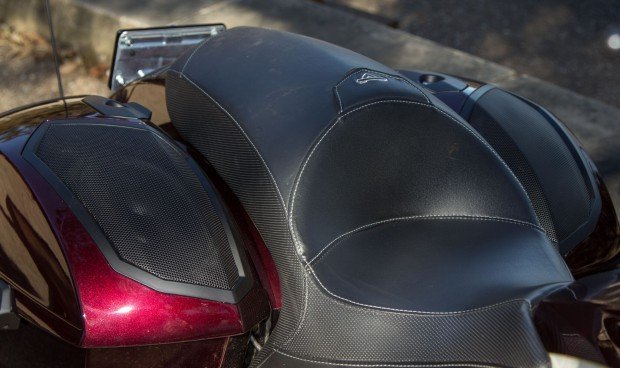 I’m all about the bass. Now there is sound aplenty from the lids of the panniers. 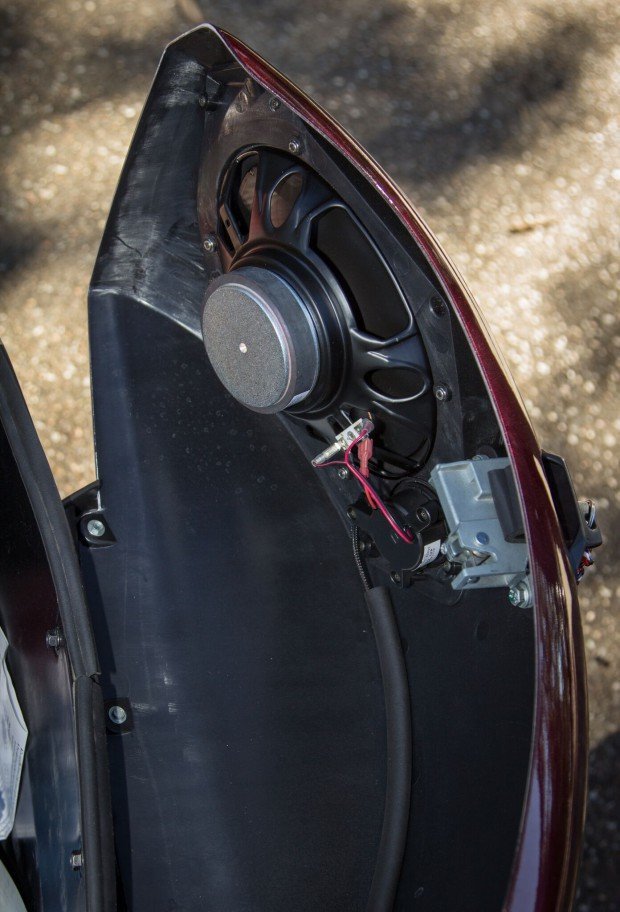 These add a bit of weight to the lids, so you have to be mindful of that when opening them.

Of course, first we did the performance bits, which you read about recently (and the link is at the bottom of this page). There’s no point in putting heels on a stripper who can’t dance, is there?

Then I took it to Adam Layton at APL Performance (read about that HERE) and had it properly and professionally dynotuned to within an inch of its life.

So the Thunderbastard now produces more horsepower, and runs crisper and harder than it ever did before. I shall shortly be taking it to the drag-strip again to see what the numbers have to say about all of that. 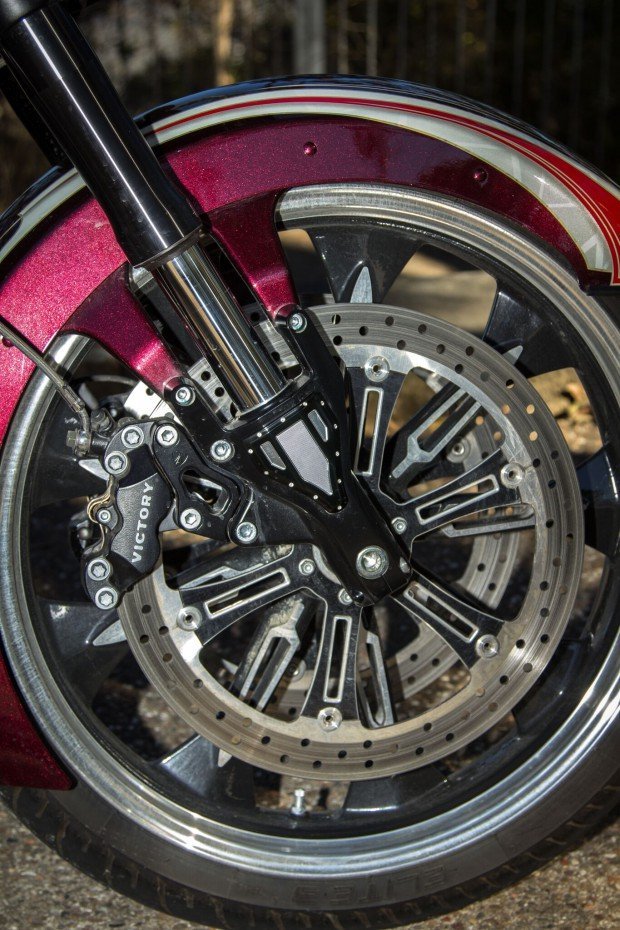 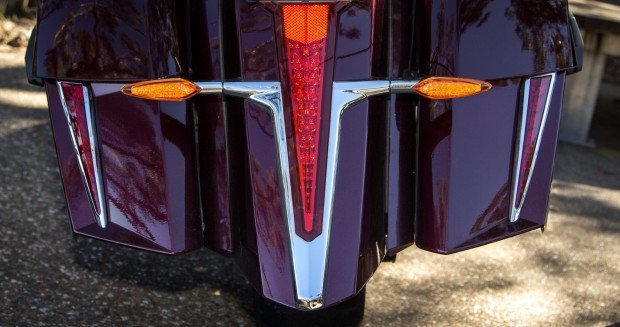 These extra tail-lights slotted in nicely on the back of each pannier. It looks great at night. And is all about safety. Honest. 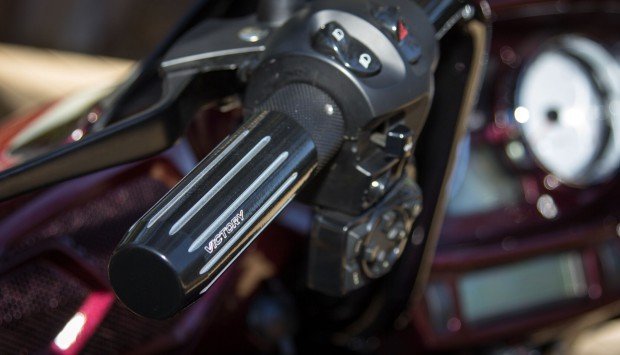 Gone are the rubber grips. These branded alloy jobbies have replaced them.

But while I waited for the drag-planets to align with the weather-planets, Chris Papas had assembled a small mountain of magnificent bling which Julz doubtlessly enjoyed bolting to the bike.

Oh, and he also had the swingarm powder-coated black so it didn’t stick out like a sore silver thumb anymore.

The aesthetic improvement is glorious. 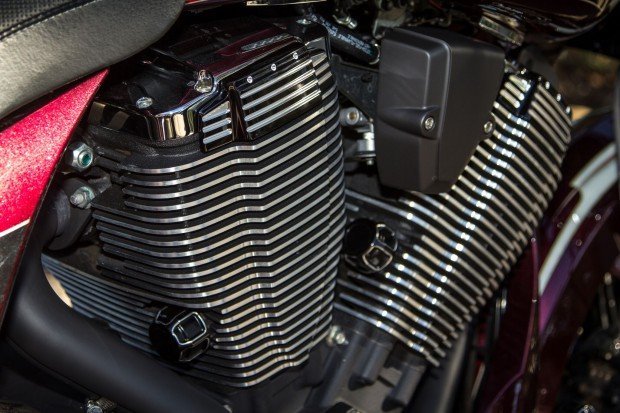 The two large and somewhat unsightly bolts that sit part of the way down each cylinder are gone. In their place are these knurled masterpieces of blackness. 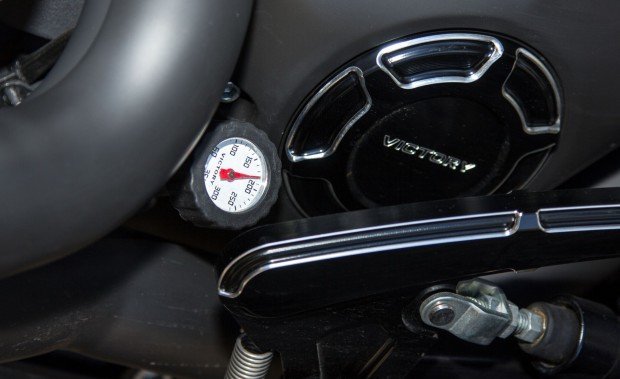 A gauge. With important numbers on it. You would be lost without it. It will also show people you care about things like oil pressure, even if you don’t. 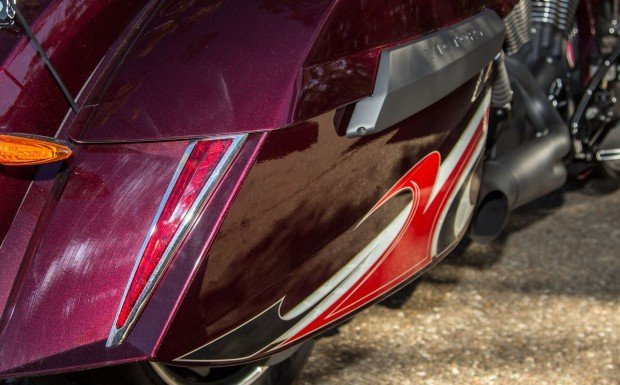 The chrome pannier hinges are now black, as are the locks.

There is now a strong visual hint of the evil that lurks inside the Thunderbastard.

Black tends to do that. Chrome? Not so much. I’m sure Brum and I are now on the same page.

I especially like the way the motor now looks. The Victory donk has always been a strong visual statement. Adding the finned bits to the top of the heads has enhanced it no end.

Of course, the devil is always in the details, and there are now quite a few details, which individually all add a little something, but when taken as a complete whole, transform the bike’s appearance completely. Just compare the before and after pics and you’ll see what I mean. The transformation is both subtle and profound.

Most happily, I am now able to draw even deaf people’s attention to the Thunderbastard as I rumble through Sydney’s urban canyons by blasting my superb musical tastes through the new 200W sound system. 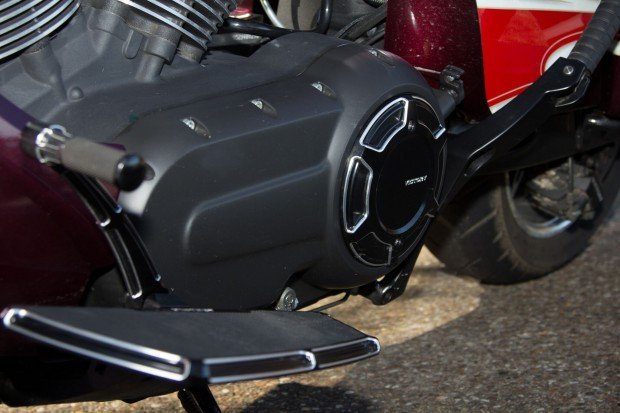 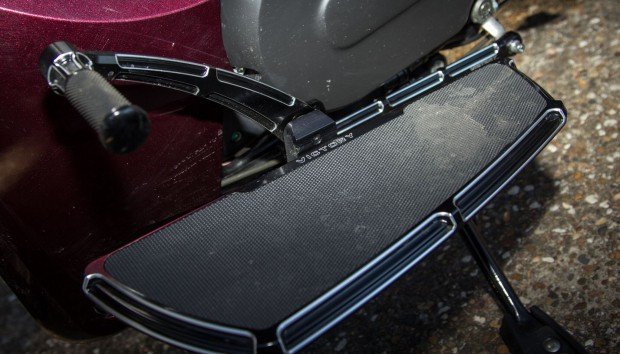 The all new footboards, gear lever and actuating arm. 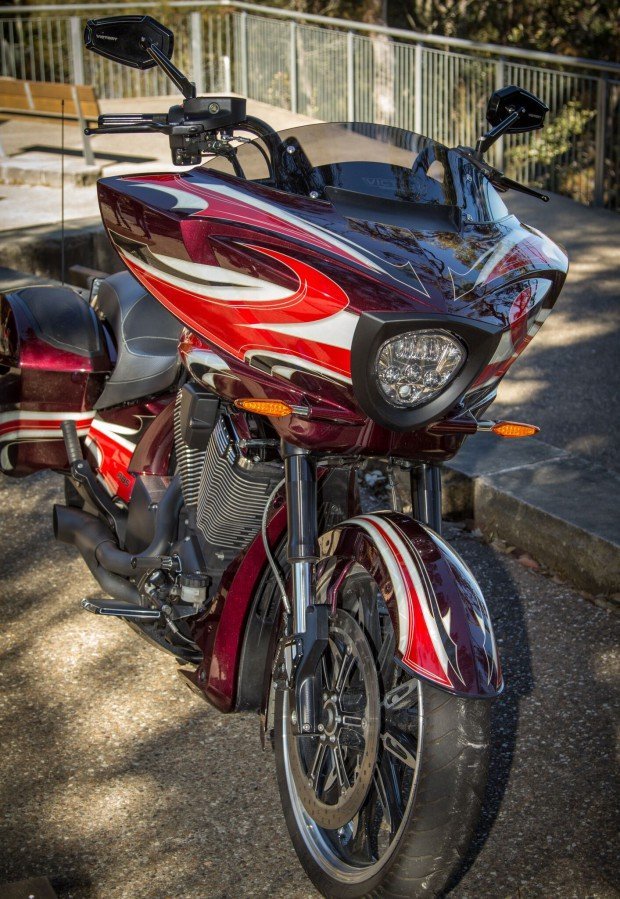 I’m thinking about vinyl-wrapping it in snakeskin.

Just one thing you need to be aware of if you do fit the auxiliary speakers to the lids of the panniers; the lids become much heavier and you will need to take care that when you open them, you cushion them on your knee so you don’t stress the hinges.

Please understand the enhanced stereo was a necessity. That Trask two-into-one pipe is so thunderously loud, I was struggling to hear Taylor Swift’s high notes at 120km/h. I’m good now. Though we will have to consider maybe another 500W if she’s going to serenade me at 180.

In the hours of darkness I can turn on the magical Purple Heart Of Evil LED lighting system Chris installed under the tank for shits and giggles. I can make it pulse, strobe or just glow balefully. Brum can now ride the mean streets of St Kilda on the Thunderbastard and not feel like he doesn’t quite fit in.

Now then, what next?

Well, after we drag race it and look at the new numbers, we shall go to the next level. And there is always a next level, isn’t there?

There is a Supercharger on its way. 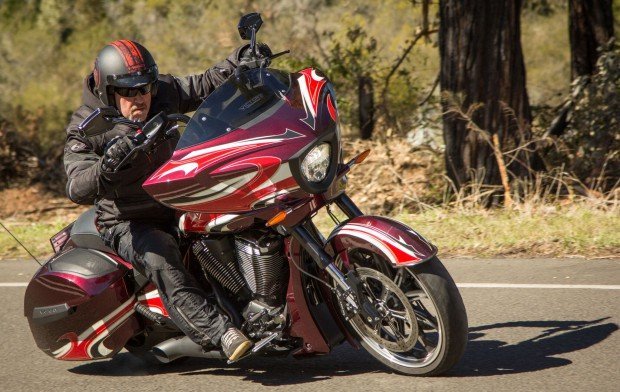 It is playing my song.

It should arrive just as the Victory accountants return from Stress Leave.

That’s good. Because I need them fresh and perky when the invoices for the bike’s new colour scheme start to arrive.

Brum and I are once again in discussions about the direction this needs to take.

I’m concerned that he may want to walk the Middle Eastern spray-path he walked with his Indian. The paint-job on his Chieftain was superb in terms of quality, but the whole purple, gold-leaf and ivory melange was just too undemocratic.

For his part, I know he’s concerned I’ll get drunk one night and take to the Thunderbastard with cans of matte black spray paint and glue icons of ancient Serbian war-saints to the fairing.

I’m pretty sure we shall find a compromise in there somewhere. 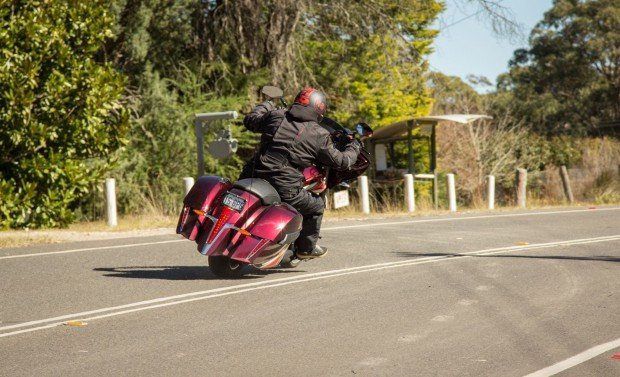 Note to self: Come back when there are girls at the bus stop.

All the parts used are available from your Victory dealer through the catalogue. You may view this HERE.

YOU CAN READ ABOUT THE BUILD FROM THE BEGINNING, SEE WHAT HOT MODS WERE MADE TO THE ENGINE AND EVEN COME DRAG-RACING WITH IT HERE, HERE, HERE, HERE AND HERE.

And here’s a video review we did of the same bike HERE, or view it directly below. 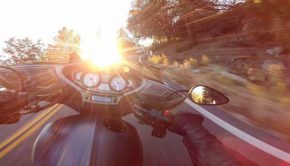 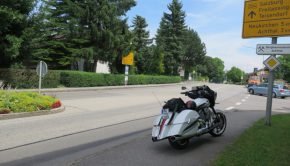 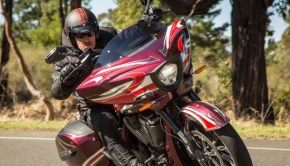