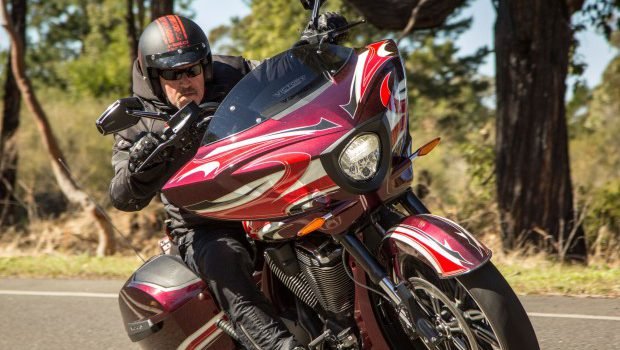 The announcement came through at 8am Spirit Lake time. Victory has ceased production.

As the news filtered through to Australian social media, there was an enormous wailing and gnashing of teeth, which is perfectly understandable.

It’s like when Joffrey of House Baratheon chopped off the head of Ned Stark of House Stark and started the War of the Five Kings in Game of Thrones. Doesn’t look dead to me.

Like the closure of Victory, it was a huge shock and totally unexpected.

And people took it personally, because that is human nature.

But what has really happened here? Has the world ended?

Not at all. It’s just got much more interesting.

A much-loved brand has ceased to be.
The ‘why’ of it is pretty simple.

“Several factors influenced today’s announcement. Victory has struggled to establish the market share needed to succeed and be profitable. The competitive pressures of a challenging motorcycle market have increased the headwinds for the brand. Given the significant additional investments required for Victory to launch new global platforms that meet changing consumer preferences, and considering the strong performance and growth potential of Indian Motorcycle, the decision to more narrowly focus Polaris’ energy and investments became quite clear.”

Polaris is of the view that it would better serve its bottom line by concentrating on its Indian brand, which is the stronger performer.

This is how business works. It’s never personal. But it is still a bitter pill to swallow for owners who have formed a relationship with the brand.

Australian CEO, Peter Alexander, is well aware of this, and issued the following Press Release…

“We first launched Victory Motorcycles here in Australia in October 2008 with our flagship dealership in Melbourne that set new benchmarks for motorcycle retail in Australia. Victory Motorcycles, through its innovation and engineering prowess, also set new standards in Heavy Cruiser motorcycle design and performance. In just 8 short years there are now four flagship stores plus independent dealers in major markets in Australia and New Zealand, all conceived and driven by the Victory brand. The learnings and plain hard work of launching Victory has now set Indian Motorcycle on the path to even greater success.

During the last 8 years, Australia established itself as the largest unit volume market for Victory outside North America. That’s an astonishing feat given our population and a testament to the enthusiasm, loyalty and dedication of our customers and our staff.

To all Victory owners both new and old, we sincerely thank you for your passion and commitment. I have been privileged enough to meet and ride with many of you at rides and other events and look forward to riding with you well into the future. We and our dealer network are committed to continue to supply parts, service and warranty to ensure this happens.

Although a tough time for all of our staff, dealers and of course riders who have put an enormous amount of blood, sweat and tears into Victory, there is a lot to be proud of and celebrate. Victory will always be a great motorcycle and a great brand that has punched well above its weight in Australia and New Zealand and forged a legacy that will take a lot of beating.

Victory Owners will always be part of the Polaris family, they will always be welcome and we will be continuing to sell these world class motorcycles for some time. Although the history books will start being written a little earlier than we would have liked, I’d like to thank all current and future Victory Owners for helping write a little bit of that history.”

What does this mean for owners of Victory?
Well, they now own collector’s items.

This is, or was, a motorcycle designed by Arlen Ness – man whose name is carved into the bedrock of custom motorcycles. Nothing can change that. Its place in history is assured.

Victorys are well-built, reliable, go well, and are a hoot to ride. I know, because I have put many tens of thousands of kilometres on various models. I have ridden one through Europe, all over Oz, and am still in the process of finishing up the now supercharged Magnum Opus Thunderbastard.

I’m not going to make any bones about it. Victory made great bikes. Just because it has stopped making them, doesn’t make the bikes any less great, does it?

The company is committed to owners of Victory motorcycles and will provide parts for the next decade. And its service departments and showrooms (now all Indian) will always welcome Victory owners.

It cannot and will not be otherwise.

The smart money would be buying MY17 Octane’s and Magnums and not putting a whole lot of miles on them. They are bona fide collector’s items.

I’m also pretty sure the deals on MY17 bikes will be spectacular, and like I said, it’s not like spares and parts will not be available anymore. Hell, you can still buy stuff for Manx Norton’s on the web, and they ceased production in 1654.

Will Victory come back? I have no idea.

Anything is possible in big business.

But what I do know is that all those Victory resources will now be directed at the Indian brand. Or the House of Targaryan, to stay within my original analogy, which fans of the books and shows will know are the true rulers of Westeros.

House Stark did not die off with the beheading of Ned. It changed and became greater than it ever was, because the only certainty in life is death and taxes.

It’s been a hell of a ride.