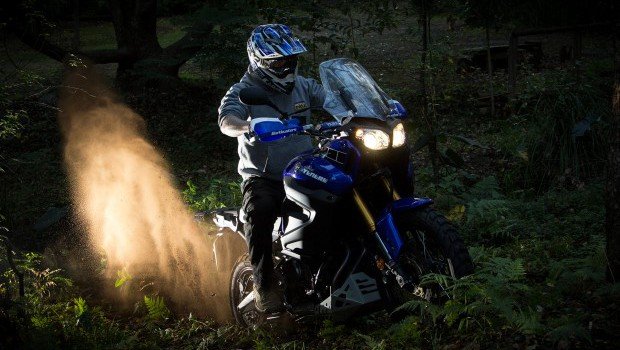 When you absolutely, positively have to ride a motorcycle across the Kalahari desert while being chased by panthers and cannibals, you should look no further than the Yamaha Super Ténéré.

But bring your man-game with you. 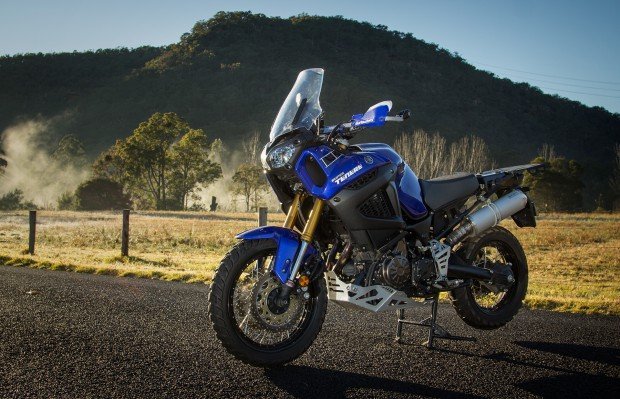 “That mountain back there? I just ate it.” 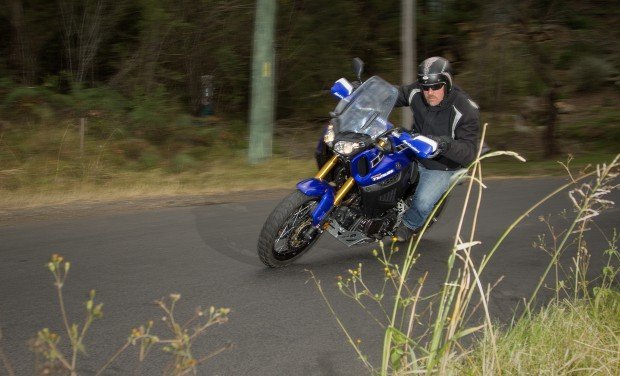 “Oh look! I can see the river from here!”

I recently got a chance to ride Yamaha’s heavily-pimped version of what is already a super-capable all-roader, and it left me questioning my manhood. And a big cheers to the Yamaha techs who fitted the growling mountain-crusher with a “this-switch-turns-the-traction control-off-ahahahahah!” feature.

They also fitted it with a heap of other off-road goodies, levering the Super Ténéré still further into the climb-every-mountain stratosphere.

For I am not ashamed to admit that while the bike is entirely capable of almost any feat of dirt-madness, I am not. Visions of me somersaulting it into the Colo River valley were ever present as I rode around looking for a place where I could leave the road, do a bit of dirt and return with my dignity and internal organs intact.

The rest of the time I commuted on it.

Of course it was capable of that. It’s like asking Superman to just kinda float around not doing anything Supermanny.

It’s not comfy, like dual-purpose soft-roaders are comfy. But then it’s perfectly suited to its intended purpose, so it’s not uncomfortable. 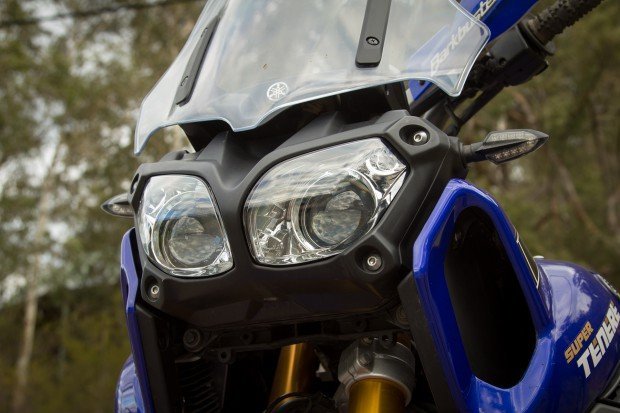 These are great. When it’s cartwheeling down a cliff in the dark, you can see in all directions. 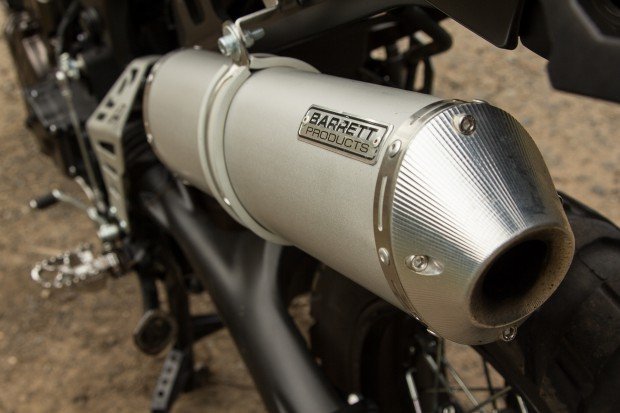 The song of its people is deep and rich. 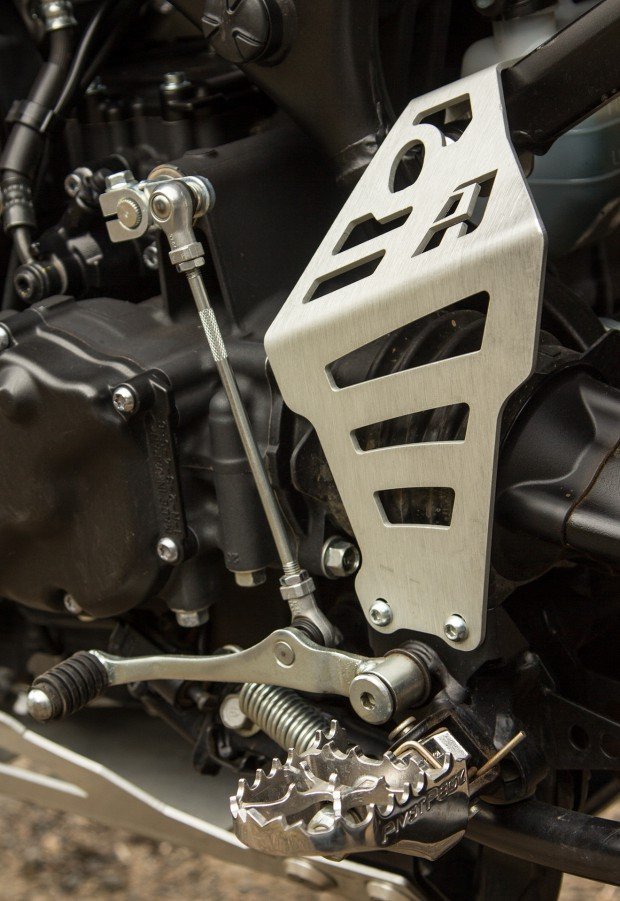 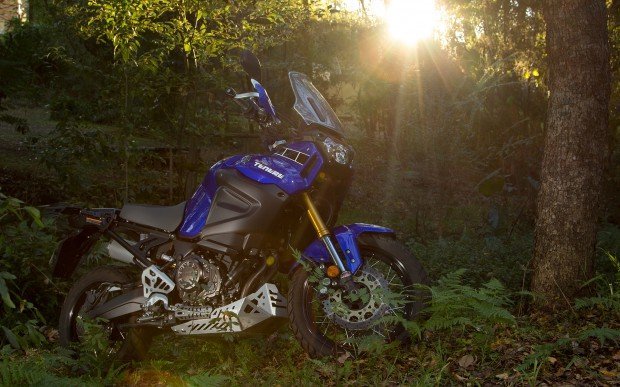 Romantic sunset shot. Then it got dark and the werewolves came out.

It’s tall. But then it has to be. So that’s not a complaint either.

And it feels rock-solid and very biddable – with an engine simply dripping with practical torque and power.

I did find myself wishing I was younger, better skilled and maybe with two weeks off so I could maybe exploit my bravery glands some more.

I did no testing on this. Anyone who reckons they’ve actually tested a Super Ténéré is either lying, or ready to compete in the next Dakar. But I did put a thousand or so kays on it – an experience that left me giddy with respect and admiration. And a bit of despair at my personal failings.

So what can I tell you about it?

It’s very dirt-oriented and super-capable in that sphere. It’s not light, but it’s not a heavyweight, either, and it’s about as honest, reliable and determined as a big all-roader gets – without the price tag of the European competition.

You can bang around town all day on it, keep your bitumen scratching to a minimum as those Karoo tyres aren’t the best for that kinda stuff, and spend your weekends seeing bits of Australia that few get to see.

And where there are no Highway Patrol cars.

The Super Ténéré, especially tricked up as this one was, is a force to be reckoned with. 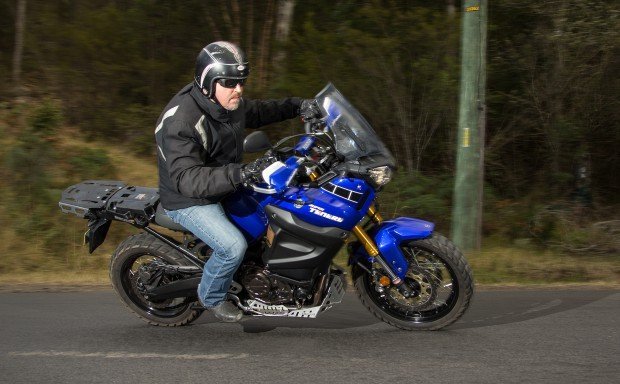 “I’m coming for you, Despres.” 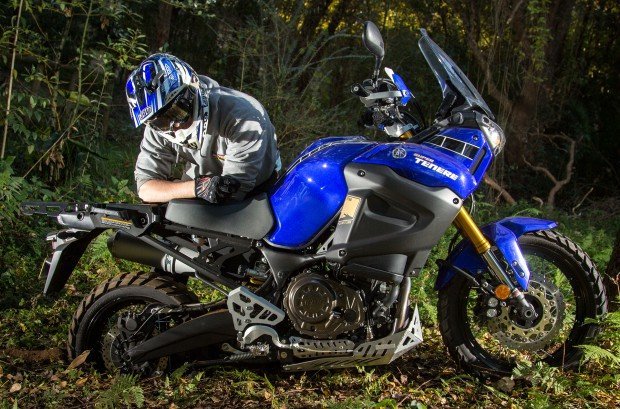 The Yamaha Super Ténéré has been around for a while and despite my brief yet somewhat hilarious stint at professional motorcycle writering, I never bothered to find out what the word Ténéré actually means. Pretty slack but kind of expected, considering me. It turns out the brand’s flagship adventure tourer is named after a vast, sandy region of the south-central Sahara and the word doesn’t translate to “chubby adventuring blueberry” which I naturally assumed it did, given all the Tuareg (that’s a language, apparently) I’ve learnt over the years – that is, absolutely none.

The Super Tén has always been a capable adventure tourer. I spent a few days on last year’s model a while ago and found it to be a podium finisher of its Japanese classmates – and a few other nationalities, too – on the road and when the tar turned to gravel, the big Yamaha out-rode the rest noticeably. Raw, brutal and honest, they’re a good thing if you’re looking to do the long-distance, semi-off-road touring thing and can’t afford the big dollars demanded by the BMW R1200GS or the new KTM Adventure ensemble. 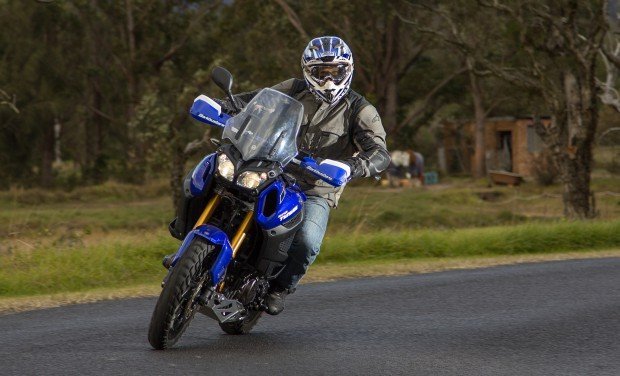 The blue matches his eyes. 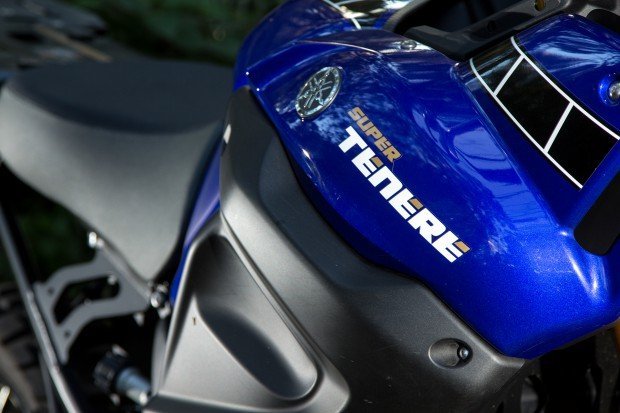 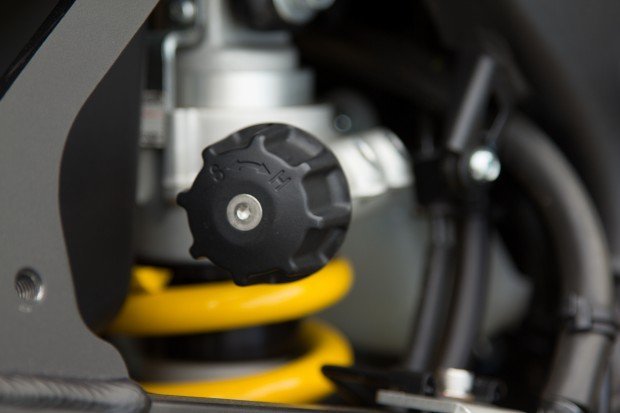 Easy to get at adjustment. 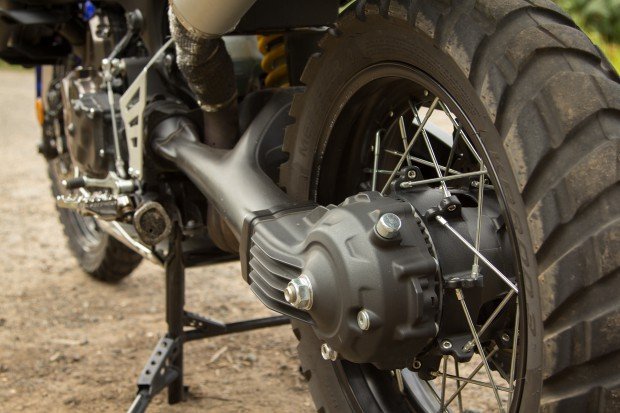 Clever spoking and a bulletproof shaft. 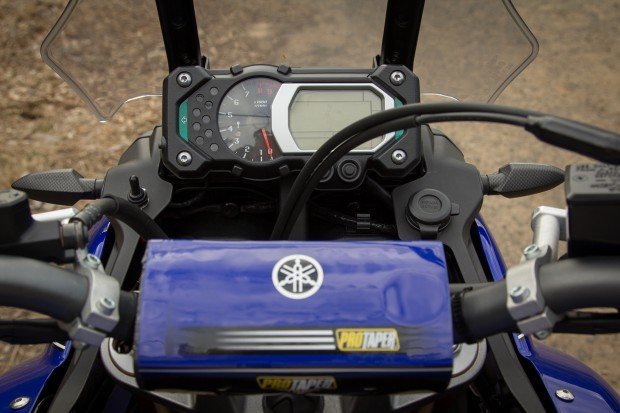 Fit one of these. Your face will thank you. Note the fun switch on the left near the nacelle. 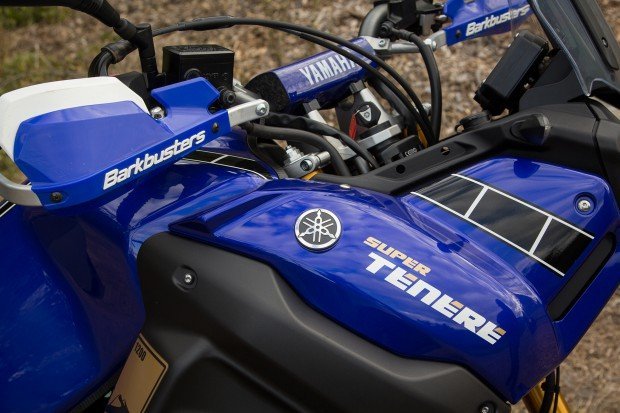 Barkbusters are a must.

This particular adventuring blueberry is a bit more enhanced than a stock one, as Yamaha has kitted it out with some very tidy accessories to give it some more prowess in the off-road department. Some of these additions I liked very much – the Barrett exhaust, for instance, makes the 1200cc twin-cylinder rumble even rumblier and downshifting like an ASBK racer during the approach to every red light on an empty Windsor Rd racer at bullshit-early o’clock produced a pleasant stirring in my pants region. This made me repeat the process a great deal times more than was probably necessary, and I also found holding the damn thing flat out in third along a potholed, rock wall-bordered sweeper somewhere around the Hawkesbury River region caused similar disturbances south of the pubic border. I liked this very much as well, even though it does jack shit for the Supere Ténéré’s off-road handling abilities.

There’s plenty of protective add-ons for when you take it off-road, realise you’re not Chad Reed and find yourself tumbling retardedly off a cliff instead of leaving sweet roost sliding the rear out of corners. The Pro Taper fatbars offer a perfect bend for the taller rider standing up, and the Barkbusters did a stellar job of keeping feeling in my fingers at the aforementioned early o’clock. The bash plate/exhaust shield are also great additions because this is another adventure bike which comes stock with the oil filter exposed right behind the front wheel – because, you know, there’s never anything sharp or hard flying around there at a great velocity. 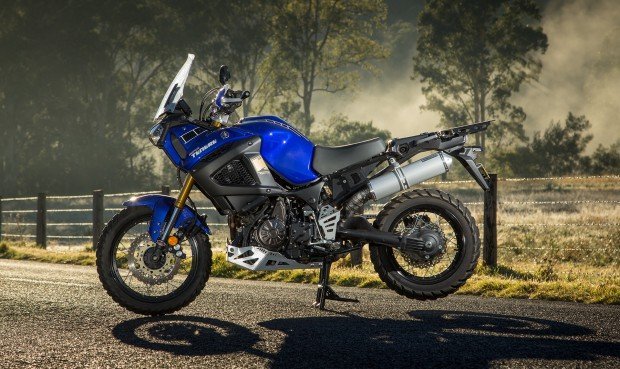 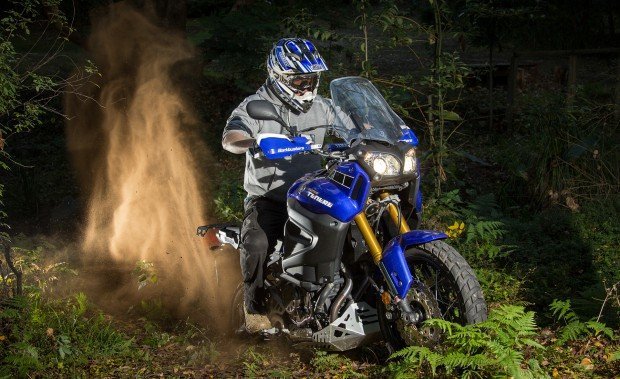 The Metzeler Karoo 3s are reasonably grippy on the road but do require a bit of heat in them before you can feel what’s going on down there. Pre-dawn traffic light drag races saw the traction control light doing the strobey disco dance of its people with not a great deal of throttle in force, however when the sun made an appearance and my rubbery bits became hot and bothered, I found grip and my happy place aboard this tremendous miler-pounder.

The Pivot Pegz are… interesting. It’s something you need to come to terms with if you’ve spent all your standing-aboard-a-dirtbike life with your pegs not rotating around themselves as the bike moves under you. I’ve heard a lot of riders rave about them but I’m not convinced yet, although I’m more than willing.