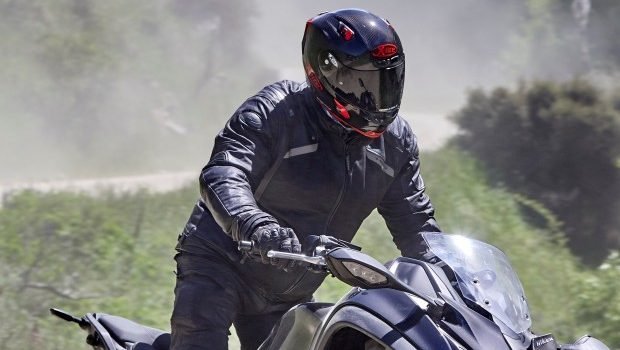 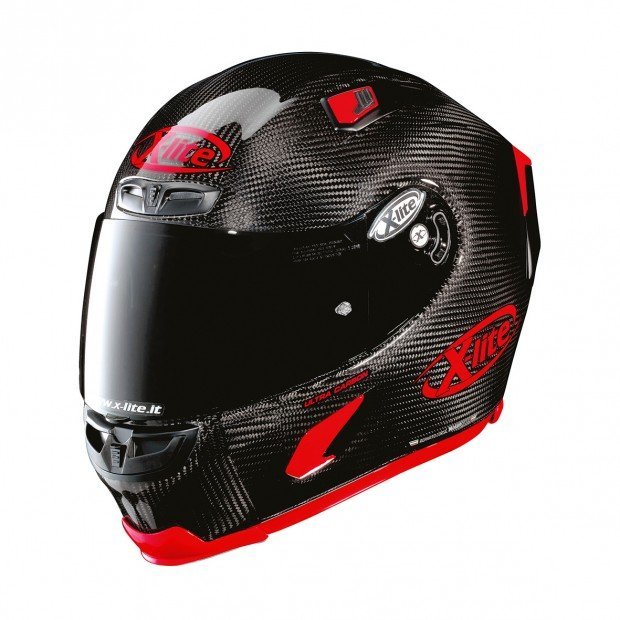 I could conquer the universe with this and look fine doing it.

One more X in its name and we’d be at such a level of helmet-porn, I’d have to take my pants off to write this. As it is, the the X-803 is right up there as one of the best-looking lids you could ever wear. Styled, designed and produced in Italy, you would expect nothing less.

And yes, it has all the true race-bred features to back up its stunning good looks – and I shall point to them in a sec.

But first, I must address my brother, Res, who bought the old X-802RR. He felt it to be the best-looking helmet he had ever seen and it saddened me when he would put it on and hide his shameless ginger beauty from the world. 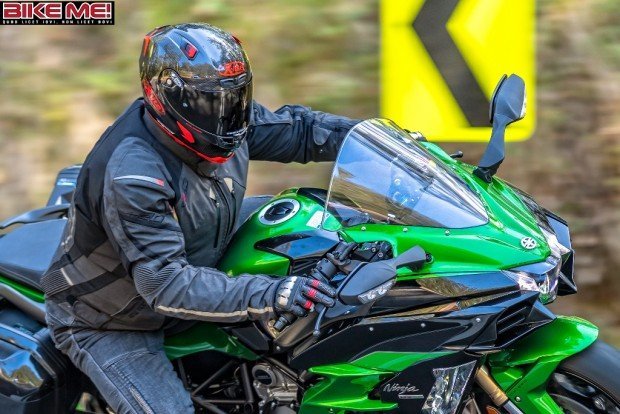 It goes with green, too.

The X-803 is the helmet that replaces X-Lite’s superb X-802RR – a hard act to follow, but follow it they did, with small but important tweaks.

Danilo Petrucci and Chaz Davies are X-Lite riders, as is Casey Stoner, so it’s inevitable they would have had some input into the evolution of the lid. 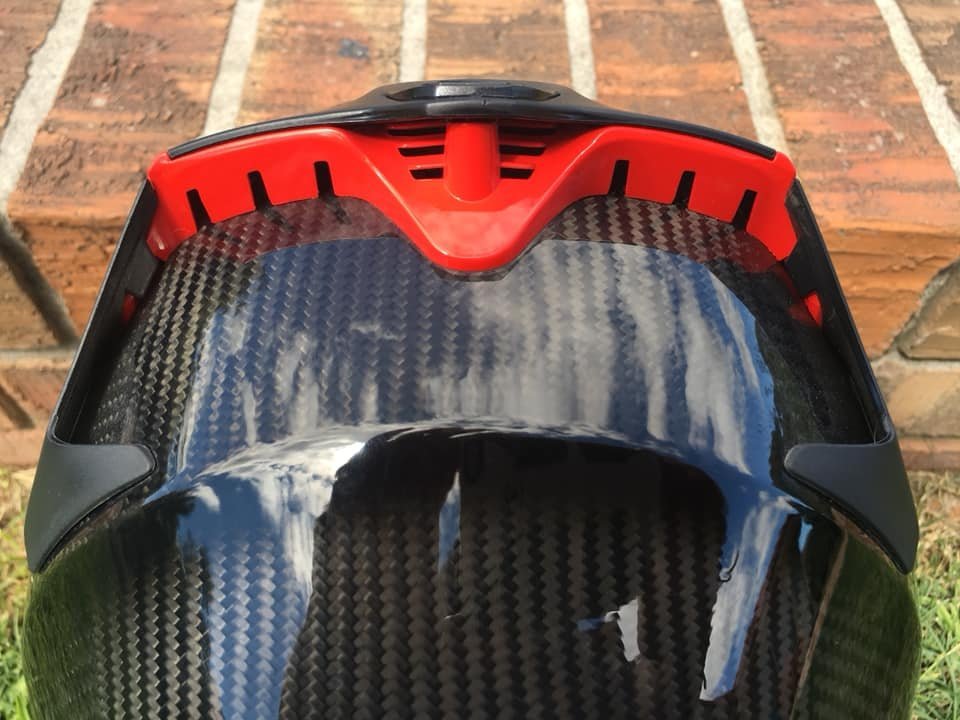 This is the adjustable spoiler and exhaust vent. And look at the carbon…

The improvements over the X-802RR are as follows…

The ratchet visor is now larger and offers even more peripheral vision. It’s a true racing lid, so it’s at its best when you’re in a racing crouch and staring at the rear-end of the bloke in front whom you must pass lest your pit garage think you’re unworthy. Both vertically and horizontally, the vision is as good as it gets. I really don’t need to see any more people passing me, quite frankly.

But more peripheral vision is even more important on the road, so bear that in mind. 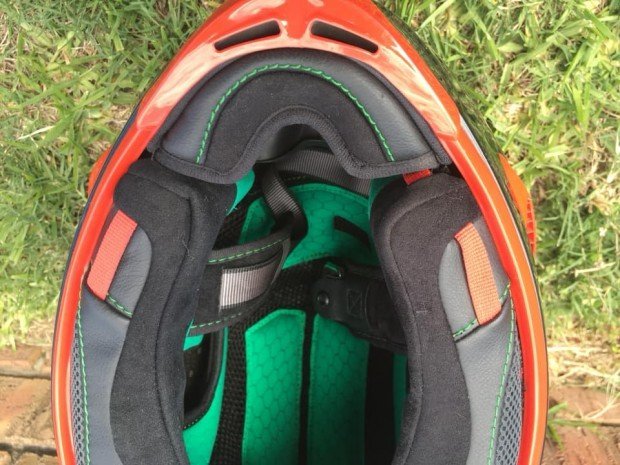 This is quality. In green. Those two red straps either side of the chinpiece are what releases the lining for the paramedics.

Nolan states it has also improved the dust-and-water sealing at the front, though how that was possible over the already excellent 802RR remains a scientific mystery to me.

Of course, you get a Pinlock visor in the box (best anti-fogging thing ever), and the ability to crack the lid open a touch also adds to its amazing ventilation.

The ventilation even has a name. Nolan calls it Racing Air Flow (RAF) and along with God, it’s just the thing you need when you’re hyperventilating into Southern Loop on a 35-degree day. 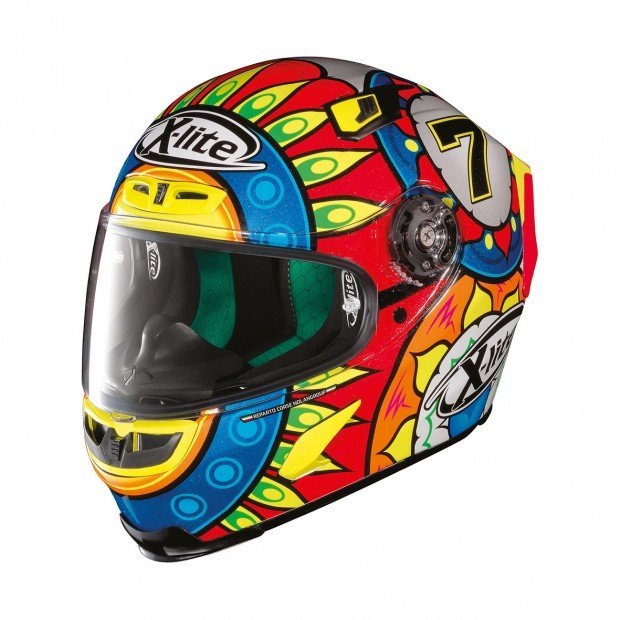 Chaz used all the colours he ever saw. 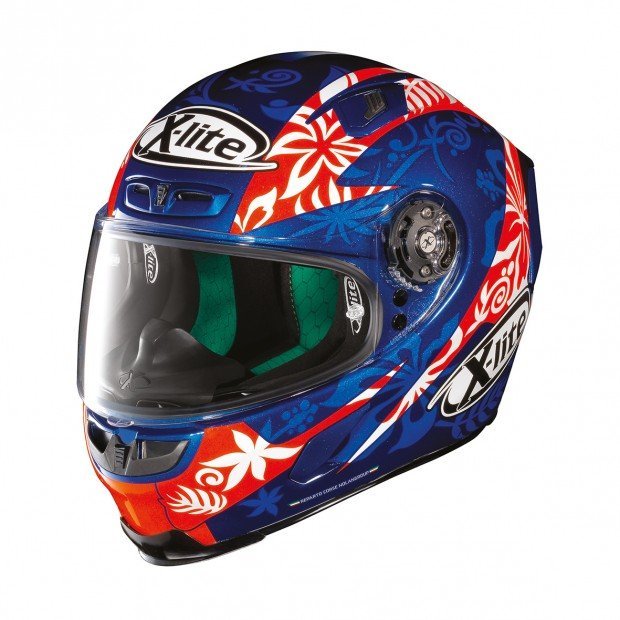 Petrucci has his tropical on. 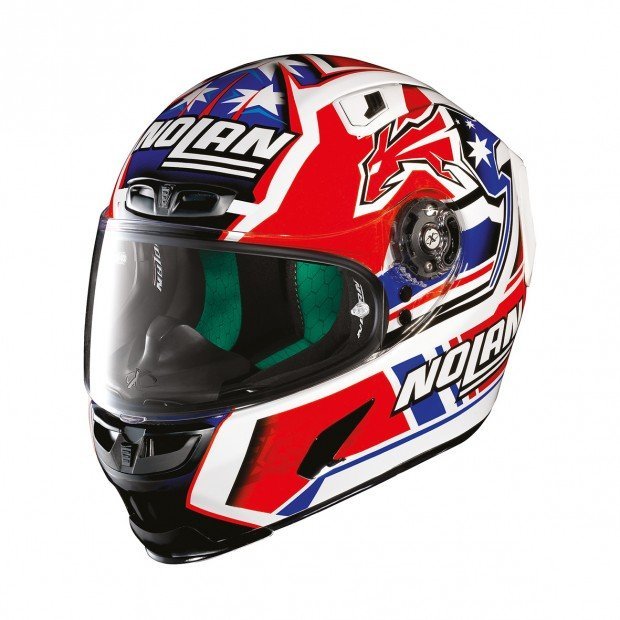 One of young Casey’s replicas. 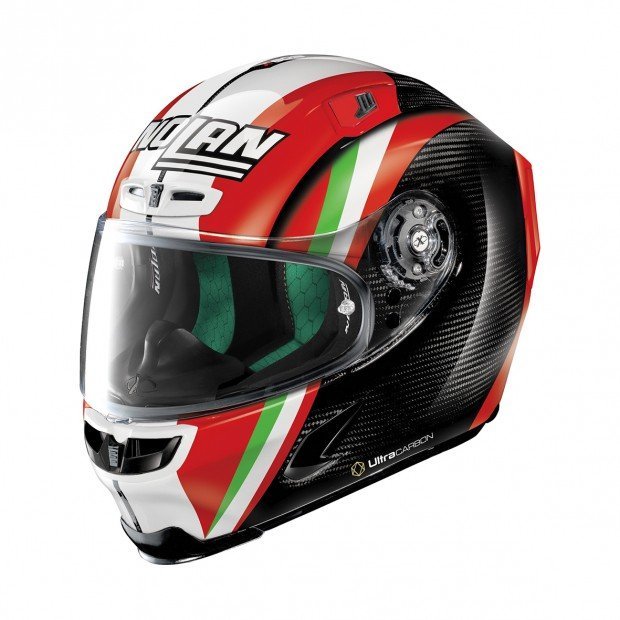 This was Casey’s Italian phase. 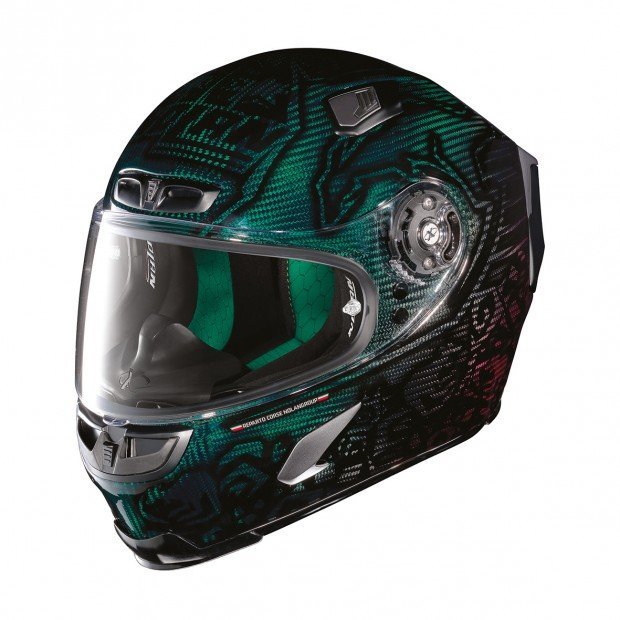 And this is Casey’s Superhero helmet. True. That’s what it’s called.

You get two open-close crown vents and two open-close forehead vents just above the visor, as well as a pair of open-close chin-vents which link to the exhaust vents either side of the chin-piece. The other vents are married to the big exhaust vent at the back of the lid, just under the adjustable spoiler, so the air-flow is genuine, plentiful and effective.

Now that spoiler might not be as lairy as the AGV Pista GP-R or Shoei’s X-Spirit III, but then you might not be that lairy either.

Does it work? Seemed to. As in the previous model, this all-carbon, hand-layered masterwork is very light (1240gm) and I experienced no buffeting or neck-wrenching, even when I did not dare look at the speedo lest Satan came for me. 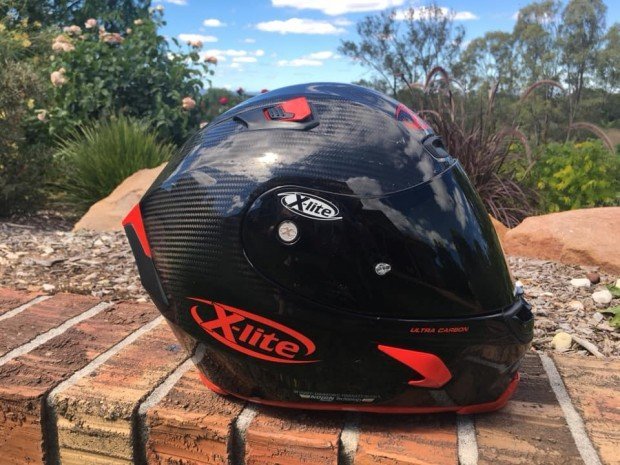 The X-803 also has a larger chin-area. The previous model was snug about the mouth, and if you had full and sensuous Angelina Jolie lips, you might have smeared your lipstick a touch. Nolan listened to the Angelinas and the X-803 is roomier about the lips. I now have to pout more when I kiss my dignity goodbye. And I can now make that pout with an excellent rubber breath-guard you can take on or off if you’re having a Bane moment.

Inside, it is as sexy as ever. Who would have ever thought green is so damn stylish?

It has netting at the crown, which when combined with an active carbon lining and a carbon weave liner, will render sweat less sweaty. But if you shed water like a plough-horse, you’ll be pleased to know the entire lining is removable (including the lining on the chin-strap) so mum can put it in the washing machine for you. 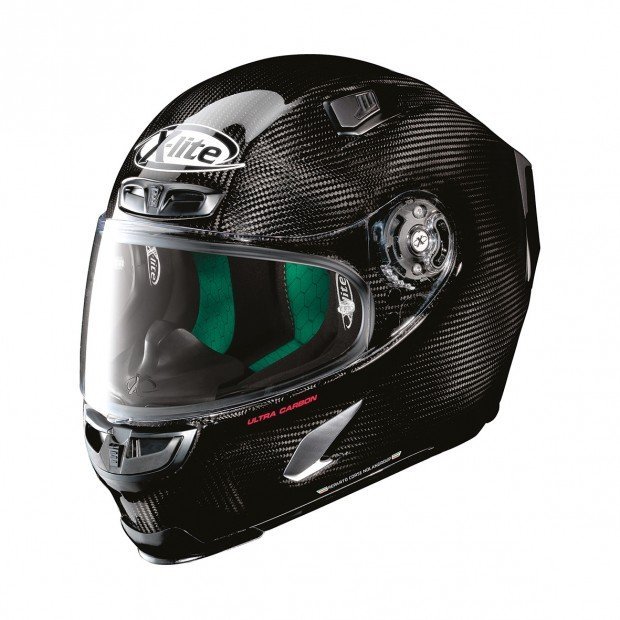 This is the Puro, if you don’t like the red accents.

Nolan has also introduced the Emergency Quick Release System (EQRS) to the X-803. So if it goes wrong, the paramedics pull on the two red tabs just inside the chin-piece and off comes your head…erm, I’m just kidding. It allows the padding to come out so they can get your helmet off if they have to.

I know a lot of people are concerned with quiet helmets. And while the old X-Lite was OK with noise, the silence of the tomb evaded it.

People have different shaped heads. A quiet helmet for some may be a noisy helmet for others. Sure, there are genuinely quiet helmets, but a lot depends on the shape of your bonce. And of course, it’s impossible to tell how quiet or noisy a helmet is when you try it on in the shop, right?

As I said, not so with the X-803. By some designer stroke of genius, the padding inside the X-803 snugs up against your ears. Not in a way that makes you crazy or irritable, but more in the way of muffling the wind-noise by closing off the outside of your ears where the noise comes in. And it is ever so effective. I struggled to hear people talk to me at sets of lights. It was very much like wearing ear-plugs, but without the sensation of having gooey wombat turds in your ears. Quite astonishing, actually. I reckon you should try one on and see if it does for you what it did for me. You will be able to tell straight away. The salesman’s mouth will be moving, but you won’t hear what he is saying.

So a marked improvement over the old helmet in so many way. 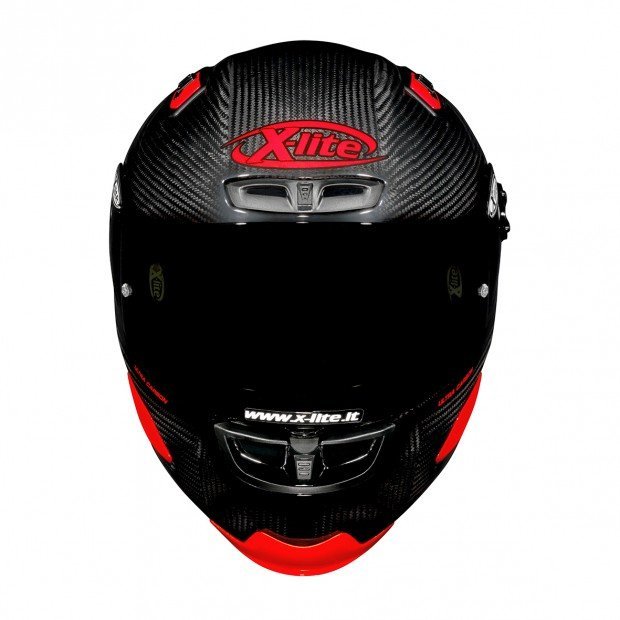 The red just sets it off.

I have worn it so far for maybe 3000-odd kays. I wore it while riding the H2, and I wore while sashaying about on the Niken in New Zealand. It is a helmet you can wear all day, at all speeds, and not want to pitch it off a cliff. And you know your lid looks better than everyone else’s lid – and that feeling of stylistic superiority has no price.

So it is more than just a great helmet. It is a statement of sexy. If you’re handsome, you’ll only dial that up a few notches. If you’re ugly, then you’ll never want to take it off.

And for the fanbois, you can get a whole range of racer replica designs – not one of which is as sexy as the carbon-with-the-red-lipstick accents. But so you know there’s a Camier, a Pirro, a Bastianini, a Stoner and a Checa. There are also two Davies replicas and four Melandri replicas because he’s such a style-whore.

Try one. Watch the salesman’s lips moving as he asks you out on a date. 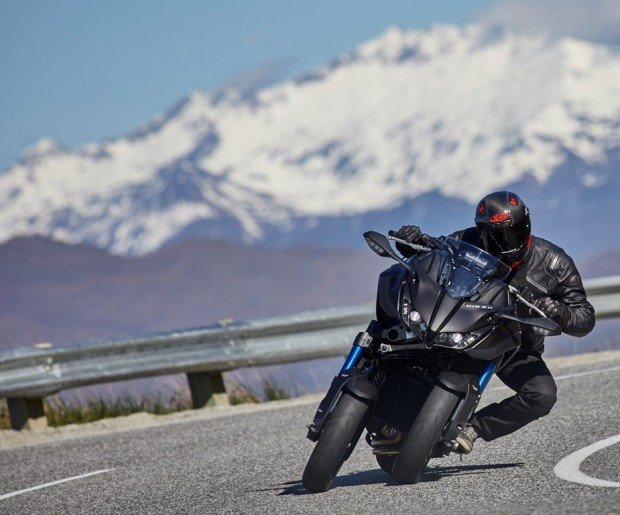 My sweat became snow and covered the mountains.

HOW MUCH? Mine is the Puro Sport. Which is Italian for Pure Sport – so appropriate, yes? A most ridiculous $749, which has to be the best value on this earth for such a top-shelf helmet – especially when it comes in three shell sizes. There are others with graphics on them for $849 and the replicas range from $899 to $949.

WHERE CAN I GET IT? You may gaze at them all at the Ron Angel Importer site HERE, where you will also find a list of stockists.