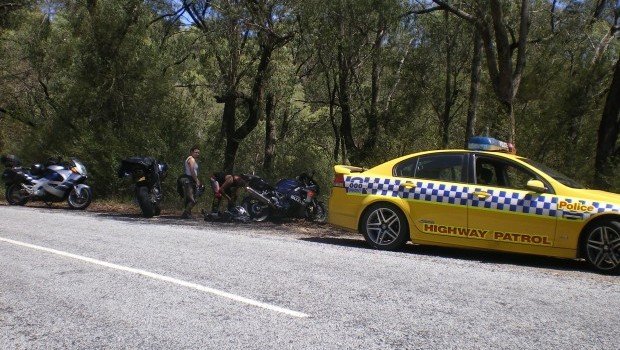 It was a summer day on a lonely alpine road in a southern state.

There were five of us. I was riding the big BMW. I wasn’t in the lead. There were some serious fast people among us, and one of them was in the lead. By a long way.

And I wasn’t even going as fast as I normally do, on account of I thought the road felt kinda funny.

Then I came around a turn and there was dust and a gixxer on its side and scars in the bitumen.

We picked his bike up, and reminded him that Rule Number One is “Do not fall off your motorcycle”, and he told us to go fuck ourselves. His bike looked rideable.

He’d taken his helmet off by himself, which is good too, but he was complaining that his hands hurt. One of our company had painkillers, and she gave him some.

None of us had mobile phone signal. We had decided that he probably couldn’t ride on account of the sore hands, and we had worked out a way to pillion him back maybe 20km to a small town, and who would ride his bike there, and who would pillion the pilot back, when The Crasher told us that it was hurting really bad now, and he thought it was ambulance time.

Just then, a car appeared. It was bright yellow, and had blue and red lights on its roof. It pulled up, and the cop got out. “Hello”, he said. “What’s all this then?”

“It was a wallaby”, said The Crasher. “Brown one. Black tail.”

“Very good”, said the cop. “Some people say it was a wombat, but wombats are nocturnal. It was a wallaby, was it? Very good.”

And he busied himself. He had comms, so he radioed for an ambulance and a tow truck. He had water, and it was a hot day, and he gave us all some.

One of us walked out into the road where the gixxer had scraped a line through it, and lifted a chunk of bitumen and blue metal out with his hand. “Road comes apart easily”, he said.

“I thought it felt kinda funny”, I said.

The ambulance guys on the radio wanted to know where they could land a helicopter. I told the cop there was a spot about five kilometres back, and maybe he could drive The Crasher there.

“You mean”, I asked, “You might go around that corner there and his hands might fall off and it would be your fault?”

I looked at The Crasher lying propped up on his Ventura pack, with flies on him.

“Do you think”, I asked the cop, “that instead of letting him lie there in the sun covered in flies, we could let him sit in the air conditioned comfort of the back seat of your patrol car?”

I invited The Crasher to get up, nice and easy, at his own pace.

“Is it OK”, I asked the cop, “if we take a photo of him getting into the air conditioned comfort of the back of your patrol car?”

“Do you think”, I asked the cop, “that you could maybe put your handcuffs on him before we took his photo?”

So we took a photo of The Crasher getting into the air conditioned comfort of the back of the patrol car so we could post it on the Internet, and mock him.

Then we waited, for what seemed a very long time. Did I mention it was a hot day? My thoughts turned to beer.

“You’ve arranged a tow truck, right?”, I asked the cop.

“And the ambulance is on the way, right?”

“So the only reason we are hanging around here is to stop you shooting him, right?”

The cop looked hurt. “I haven’t shot anyone in days”, he said.

We spoke to The Crasher later. He said as soon as we left, the cop drove him five kays back down the road to where the helicopter could land.

The ambulance guys gave him morphine. He had two broken hands.

We posted pictures of him getting into the patrol car on the Internet, and mocked him, and made crude jokes about what he couldn’t do with two broken hands.

It took him a while to see the funny side.