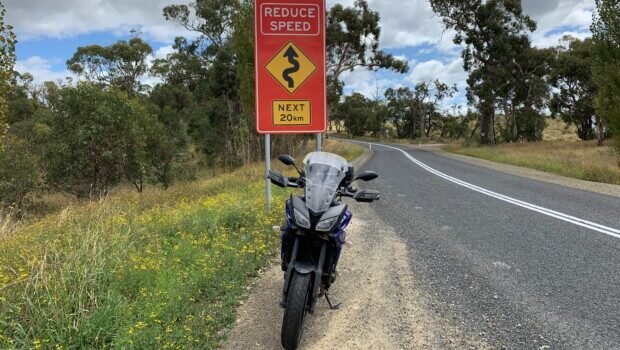 It started to rain about 18:15 — just after Ben and Miles and I climbed on to the back of the truck with the rifles and the spotlight. We hunted for two hours in the rain before Ben and I decided we’d had enough and we should drive back to Sofala and drink some sweet American whiskey. Yes, drive. I was in a car. The cops get all weird if you carry guns on bikes. Of course, it’s okay when THEY do it.

It was a forty-five-minute drive. We got in our cars. The causeways on the dirt roads were getting a fair bit of water over them, but they were passable until we got to the big one at Sallys Flat. It was raging. Ben and I conferred in the rain. “There’s no way we’re going through that”, he said. It was a good call.

We considered our options. It didn’t take long. There were two. One: Doughertys Junction Road, near where we’d been hunting. It crossed Pyramul Creek, and that always comes up real fast after rain. Two: Aarons Pass. Hopefully the high road wouldn’t have deep water on it.

I’d ridden the Aarons Pass road a few times over the years. It was, in a word, gnarly. Once or twice on the VFR. Once on the DL1000 with Gonzo on his CB1300, where the hard flinty dirt road put a split in my front tyre that two rope plugs wouldn’t fill. Once on the Tracer, accompanying Boris on the Niken. Boris didn’t think it was gnarly, because he was riding a bike with two adventure tyres at the front on a dirt road. And another time on the Tracer, after they decided to put the wind farm in at Crudine Ridge. They took the top off some of the hills and widened some of the road and increased the radius of some of the corners so the trucks could get the blades in. It was slightly less gnarly. There was a four wheel drive in a ditch at the side of the road that time to remind me what it’s like when it’s wet.

Ben and I turned our cars around in the rain and headed for Aarons Pass. There were a few causeways along the way, but the rain water was shallow. Ten centimetres max. Then the fog came in.

There was some real slippery surface along the way, but after a while, to my surprise, I found we were driving on blacktop.

It took us three and a half hours in the fog and the rain to do our forty-five-minute drive to Sofala.

“I’ve always said”, I told Ben at about midnight, over the third whiskey, “that the Aarons Pass Road would be great if it was tar. And now, it appears, some of it is. The question is, how much? I lost all sense of direction and distance in that fog.”

“Probably just to the wind farm”, said Ben. “So they could say that it created jobs.”

Next weekend was dry. I went for a ride. It’s a bit under three hours from my place to the turn-off. There’s a sign just after it that says 20km winding road. I stopped and zeroed one of my trip meters, so I could find out how much of that winding road was sealed.

It wasn’t a surface you can scratch on. It looked like it had been there a few months, but there was still loose gravel on top. It’s a very lonely road. The bush comes close to the road. The most wildlife I saw was a couple of bearded dragons, but there are a shit-ton of ‘roos in those hills, so you’d want to be careful within a few hours of dusk or dawn.

After exactly twenty kilometres, the road turns to dirt. Just outside the Crudine Ridge Wind Farm.

I stopped. I took a photo. I peed on a tree. I turned around and rode back.

Nice scenery at the top of the pass. Rolling hills. Lake Windamere in the background. 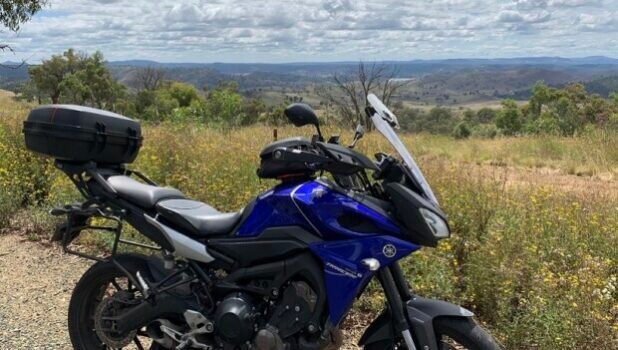 Lake Windamere in the background. MT-09 Tracer in the foreground. Scenic.

I dropped by Ben’s joint on the way back. He’s east of the Blue Mountains these days. I reported on the trip. “You know,” I said, “I reckon it would be less than ten kays of dirt from the wind farm to Pyramul Road, and along that there is the Gold and Fleece Hotel at Windeyer, which serves a tasty lunch on weekends.”

“More like less than five”, said Ben. We looked it up on the g-map. It was three.

“The slippery bit we hit that night before the tar,” he added, “was  probably freshly graded. I wouldn’t be surprised if they’re going to tar it all the way to Pyramul Road.”

“I know people”, I said, “who are much interested in country pubs at the end of winding roads.”

I went home and called Gonzo. “Hi Gonzo”, I said. “Do you want to go for a ride to the Gold and Fleece at Windeyer?”

Now I have to find a way to extend the wind farm job creation scheme to the Queens Pinch Road.