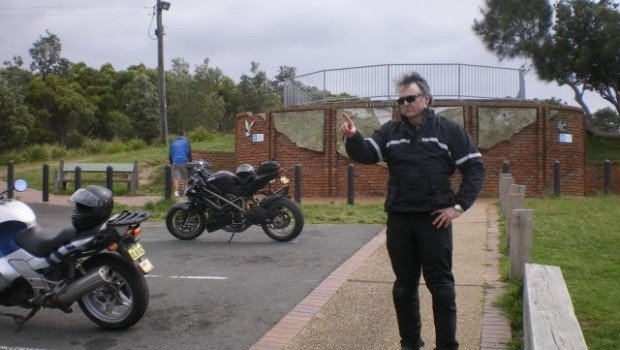 It was wet today, so I went for a ride with Bly.

Bly likes buying wet weather gear and complaining that it doesn’t work, and he had some new stuff to bitch about.

We rode through the Royal National Park. The road was wet. Bly had new Michelin PR3s, and his rear locked up on compression braking and made him go wide coming in to Audley.

We passed a bunch of Yamaharley cruisers coming the other way, with a faired scooter in second place. The scooter had its right indicator on. I watched in my mirror as the scooter moved out and picked off the first cruiser. Hah!

I passed the sixth and seventh coppers I’d seen so far.

We stopped at Lawrence Hargraves point. Bly visited the seabirds toilet. I held on, because I can never remember whether men are terns or auks. Bly came back. “Which way should we go, Bly?”, I asked. 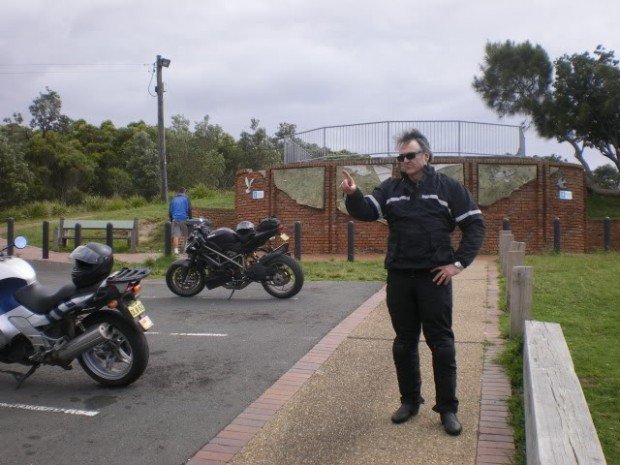 So we went up a wet Macquarie Pass and bitched some random guy on a Triumph twin and we turned right at Robertson because the eighth copper had his lights on at the bottom of the hill. We rode a wet Kangaloon road past Lake Wingecarribee, which isn’t bad as lakes go except it’s shallow at the sides and if you really have to tie weights to something that it’s not good for other people to find and drop it in, you need a boat, which adds a lot of stuffing around.

We bypassed Bowral on a wet Old South Road past the Bong Bong airfield and hit the expressway. Then the road got really dry and it became a beautiful day, so we went home.

I’ll have to call Bly up and ask him about his new rain pants.

I bet they leaked.