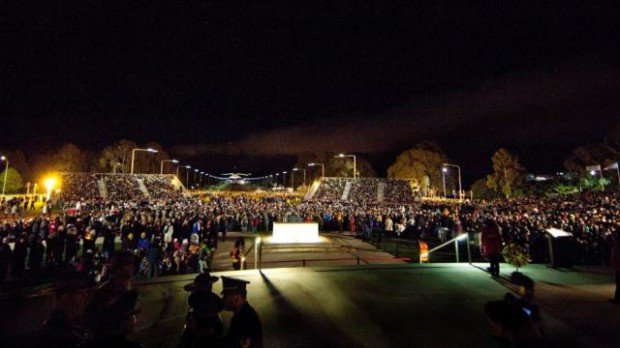 The warriors were honouring their dead on the morn, and life at the 24 hour service station at Pheasants Nest was surreal at 2230.

Boris and Biffa and I drank coffee in the parking lot and listened to our bikes tick as they cooled.

A senior citizen with a speech impediment showed us a piece of thick glass with a hole in it and honked about something. An early ‘80s Ford with a big V-8 motor that sounded like it was running some serious compression pulled up, and an old guy with bent legs who walked with two sticks got out of the driver’s seat. A woman with a three legged cattle dog got the animal some water, but it wasn’t thirsty.

An SMS message arrived from Daz after 2300 explaining that he was running late as he had some highway patrol to deal with. “Going for a ride with Daz is like war, or prostitution”, I told Biffa. “It is ninety nine percent waiting, and one percent furious action.”

Daz and Rob arrived around midnight, and Daz did things to his SuperDuke with tools, because Österreich, and we smashed through the night in a six hundred horsepower mototrain. We stopped at Marulan for coffee. It was surreal in smaller doses, and Biffa put Bundaberg rum in our flat whites.

We stopped one more time, at the memorial to Major Peter Badcoe VC on Remembrance Drive at Lake George. Smokers smoked. It was dark. The Milky Way was icy clear. We saw three, four, five shooting stars. “When beggars die there are no comets seen”, I said. “The heavens themselves blaze forth the death of princes.”

A cop in the 7-Eleven in Canberra directed us to the War Memorial. It was crowded. There was standing room only, and there were three or four people per square metre. The Dawn Service started at around 0430 with readings from the letters and diaries of warriors. Wreaths were laid, and songs were sung. There was contemplation in silence for a time.  The sun rose. A hundred thousand people queued for buses.

We breakfasted, and slept a little. Daz and Rob went back to Sydney. We had a late lunch, and went drinking. Chuck found us, and he had his medals on, so we bought him drinks and he told us stories, and every time he tried to buy a round we told him that it will be a cold day in hell when a soldier has to buy drinks on Anzac Day, and bought another round. We got gloriously drunk, and went to dinner, and got slightly more gloriously drunk when Chuck, through deception and manoeuvre, bought a round while everyone was distracted.

It was a matter, he said, of honour.

I breakfasted with Boris the next day. The Canberra Times said they had catered for fifty thousand people at the Dawn Service, but a hundred and twenty eight thousand turned up. We fuelled and headed back up the Hume Highway to Sydney.

“That was a great weekend” Boris declared, when we stopped at Pheasants Nest for fuel. “We should make this an annual event.”

I agreed that it was only fitting.

I was home an hour later. I checked the news. SBS reporter Scott McIntyre had tweeted on Anzac Day that Australian soldiers were responsible for “summary execution, widespread rape and theft” in Egypt, Palestine and Japan; and that Australia committed “the largest single-day terrorist attacks in history” on Hiroshima and Nagasaki.

SBS fired the dumb bastard, of course. Shame he wasn’t in Canberra with us.