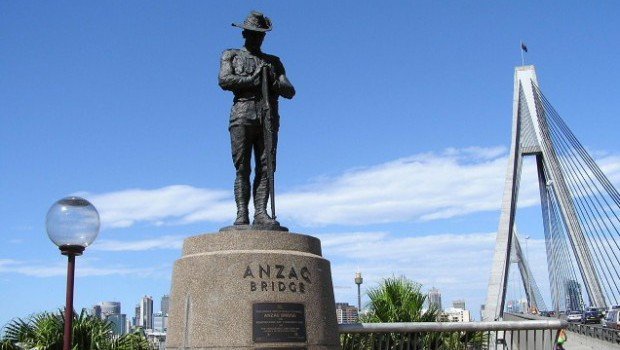 I was riding the KLR650 over the Anzac Bridge and passed that statue of the soldier with the muzzle of his SMLE .303 resting on the toe of his boot in a manner not recommended by the guy that gave the safety lessons back when I applied for my firearms licence all those years ago. Great rifle, the Short Magazine Lee Enfield. I owned one for a while.

Close your eyes and imagine, if you will, a world without the Short Magazine Lee Enfield .303. The sun still shines. The birds still sing. And yet, as far as the eye can see, there are no SMLEs. Also, there are slightly more sushi restaurants. Apart from that, it’s pretty much the same.

Not that important then, SMLEs, are they? So I sold mine, and bought a Ruger M77 chambered in .308.

But I digress. Where was I?

I should have been paying attention to the traffic, rather than thinking about war and hunting, but I’m a risk taker. I once went two hundred and fifty kilometres an hour on a motorcycle. I once jumped out of a perfectly good aeroplane at 13,000 feet, and thought nothing of it. If Oscar Pistorius invited me over for a couple of beers, I would think nothing of asking him if I could use the bathroom.

I wasn’t paying attention to the traffic. I was planning what I would do in an April where the Anzac Day public holiday is the Friday following the Easter Monday public holiday. Take three days off work, I thought, and have a ten day break.

I decided I should visit my brother up in the bush. I could take my daughter up on the VFR800, and we could camp in his bunkhouse, and I could ply him with liquor. It’s a scenic ride, and he likes being plied with liquor.

There are country pubs nearby with shady beer gardens and kitchens that cook honest steaks. I could buy him lunch at the Royal at Hill End or the Gold and Fleece at Windeyer.

Also, he has a trail bike, and riding motorcycles keeps me sane. My daughter could play with his dogs and goats and chooks, and catch lizards and yabbies and frogs and snakes and things.

“Would you like to go to your uncle’s place on the bike for a few days after Easter?” I asked my daughter over dinner that night. “We could go the scenic way.”

“Does he have that horse yet?” she asked back.

“Do you want to go if he does have the horse?”

“Hardly a relevant question then. What are you going to do if he does have the horse?”

She scares me sometimes.

I called my brother. He said come up. There are wallabies and rabbits and feral pigs around as well, he said. We could go hunting.

I said I would go hunting with him. It’s futile, but at least it gets you out in the fresh air.