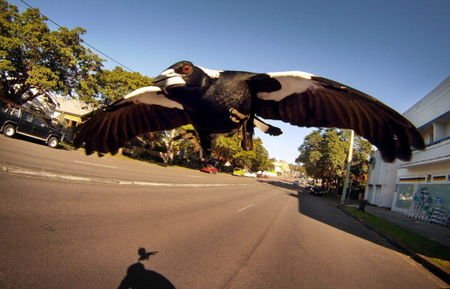 Glance at the speedo – 65. OK. It’s a bit optimistic, and the radar faces forward, of course; and I’m not there yet. I trickle past at 55 indicated, feeling virtuous.

BANG! Something has hit my helmet. I see my shadow out of the corner of my eye. There’s a large bird hovering over my head. BANG!

Screw this. I crouch, twist the grip, the bike gathers speed. Shit. I’m still in the radar field.

I twist my head and check out the Highway Patrol car in the mirror. He hasn’t moved. Maybe he’s wet himself. Maybe he’s gone to sleep. Maybe he’s having a donut induced type 2 diabetes attack. All of which are okay by me.

Australian Magpies. I love ’em. Their scientific name is something tibicen, which is Latin for flautist. They have a fabulous song. They are muscular, and walk tall, and their black and white plumage has the elegance of a dinner jacket. Their juveniles hang around in groups, and swagger, and look like something out of West Side Story; as if they should be smoking cigarettes and propositioning passing women.

They have a reputation for attacking humans that come too close to their nests. I’ve read about it, but never experienced it before. Apparently one of them killed a kid decades ago by driving a tetanus-infected beak into his skull.

But I learned a valuable lesson that day. When they swoop, they have their undercarriage down – I could see the shadow of his legs. I reckon it would be a simple matter to grab him by the legs with the clutch hand, and smash his skull into the VFR’s single sided swingarm.

It’s all very well to have a fabulous song, but that’s no reason to carry on like a mujahedin.