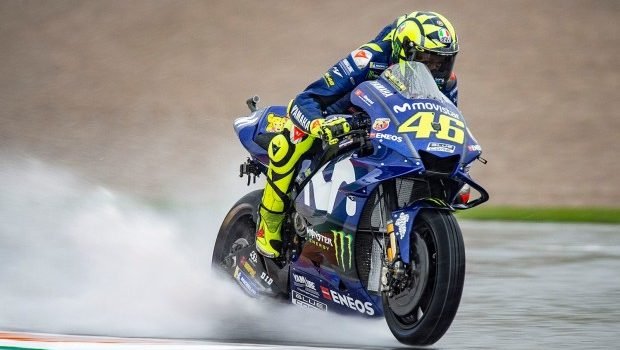 And in a few weeks, he will compete in his 24th world championship. He has thus far contested 383 grands prix. There have only been 876 of them to contest since it all began in 1949.

If you like statistics, you can go and look them up for Rossi. It is entirely pointless for me to list them here. That’s not what this piece is about.

This piece is about a 40-year-old man who has indelibly carved his name into the history of this world and my world – and my world is motorcycling.

I am an unashamed and entirely unapologetic fan of The Doctor. I have been so since he secured his first world title in 1997. I was 36-years-old back then. Rossi was 18. I had a normal motorcyclist’s interest in the Grand Prix circus and was hugely chuffed an Australian was the champion. Mick Doohan was the unquestionable King of the Motorcycle Racing Universe at that time, having won his fourth world championship in the 500cc class, which was the year Rossi won his first in the 125s.

To be honest, my interest was very much in the premier class back then. But when this sassy, weird-looking Italian kid lit his own touch-paper on the track, I noticed. A lot of other people noticed, too.

But it was only a casual glancing notice kind of thing. Rossi was probably just a flash in the pan. Motorcycle racing has lots of those. A brief blaze of glory, then back to the middle of the pack and obscurity and excuses.

But Rossi didn’t do excuses. And still doesn’t today. He just races. And he races as if his entire existence, his entire being, his entire purpose for living, is belting a stupid motorcycle around a racetrack at speeds I cannot and will not ever comprehend.

And so began his incredible career and my equally incredible…well, adoration of him. And I do adore him. I have never met him and probably never will, and if I did I really do not know what I would say to him, other than maybe thank him from the bottom of my heart for the way he has thrilled and delighted me all these long years.

It’s a weird thing, my adoration of this motorcycle racer. I am not given to fawning at celebrities. I could honestly care less about actors, mummers, presidents, astronauts, or even other sportsmen. I think this is because I don’t act, mummer, president, astronaut, or play any sport. I have no terms of reference for what they do, objectively impressive as it may be. But I do ride a bike, and when I see someone, anyone, ride a bike in a way I cannot ever do or even dare attempt, it speaks to places deep inside me.

So I am in awe of the skills displayed by even the slowest and lowliest of the top-end racers. But in Rossi’s case I am over-awed. I am overwhelmed and open-mouthed. Marquez does that to me too. But he is not and never will be Rossi, even if he wins 50 championships.

The difference and reason why this is so is hard to identify, but I think a lot of it has to do with the way Rossi is…well, Rossi, I guess. He is intelligent, charming and utterly ruthless. He is the consummate motorcycle racer, self-marketer, MotoGP product, professional sportsman, and all-over motor-racing creation the likes of which has never been seen.

He is the complete and finished deal.

He is also a merciless killer and an irredeemable clown. And that combination is utterly hypnotic.

His after-race antics are now copied – Hell, Lorenzo once almost drowned himself in a bid to approximate the yellow star that will forever outshine his own not-insignificant achievements.

His enemies are and have been monstrous talents in their own right. Biaggi, Lorenzo, Stoner and Marquez…Gibernau not so much, but you get the idea. He has beaten them all and they have beaten him. Of course they have. Yet he still outshines them like floodlight outshines a torch.

He gives back to the sport he loves so much in so many ways, and while Agostini is Agostini and will always be Agostini, there isn’t an Agostini Academy coaching young racers, or running teams in the lower classes of the sport.

Each time the camera is on him – and let’s be honest, it’s on him a lot, even when he’s not winning – he gives the impression there is nothing he’d rather be doing than racing motorcycles.

Is he faking that? I doubt it. I have spoken to people who know him, have met him and even been out with him several times. He really does love what he’s doing. And it makes sense that he does, otherwise why the hell would he be doing it? It’s not like he needs the money. It’s not like he can’t stop winning – he hasn’t won a race in ages. It’s not like he has nothing better to do than to risk his life each time he saddles up against riders half his age with stars in their eyes.

You can bet each and every bloke on the MotoGP grid wants to win the race. They are racers, after all. But it’s also a fair bet each and every one of them wants to beat Valentino Rossi as well. Yes, they want to beat Marquez and Lorenzo and Dovizioso, too. But they really, really, really want to beat Rossi. Because he is Rossi and because if they live to be 1000 years and win 1000 championships, they will never be Rossi.

He is the big yellow elephant in every MotoGP room. And even at the age of 40, that elephant is still capable of crushing you, eating your heart, and stomping your soul into the gravel. Everyone on the grid knows that. Ask them.

I have a long memory, and it still works pretty well. I have seen all of his legendary, unforgettable races – races that will forever be the stuff of MotoGP folklore. Many of them I have watched standing because I was unable to sit through the radioactive tension on the track. I have screamed myself hoarse in a house full of sleeping family and at the Island when no-one was sleeping at all. I have had my spirit slain when he has lost or when another championship has just eluded him, and I have been giddy with primal joy when he has won.

For me, he is this cruel and brilliant sport incarnate.

And so for me, he is motorcycling incarnate.