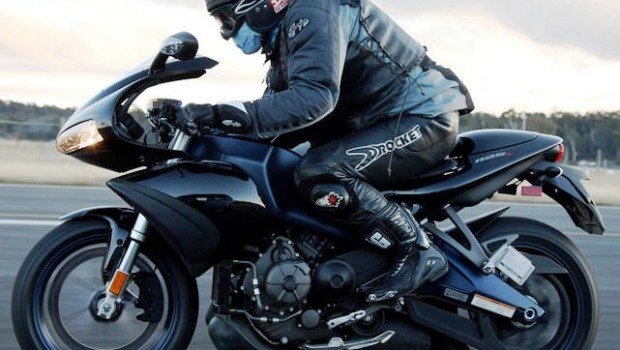 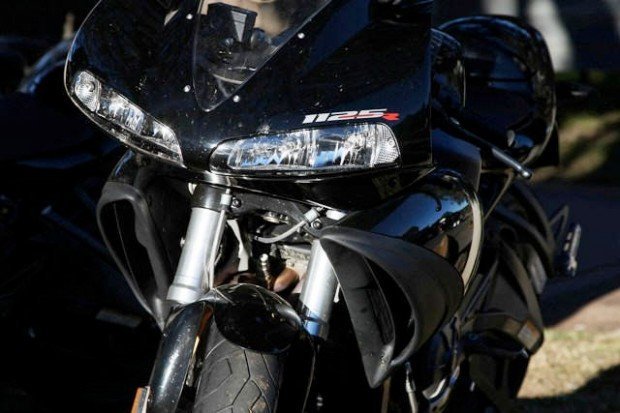 IF YOU’RE ever lucky enough to spend some time with Erik Buell, you’ll quickly understand that he is a driven and passionate man. He loves motorcycles like a motorcyclist should love motorcycles – truly, madly and deeply.

Erik’s dream was to build an all-American sportsbike – and it was a dream he had been relentlessly pursuing for a quarter of a century. Please note that I have used the past tense when referring to Erik’s dream. That is because he has achieved what he set out to do all those years ago.

Behold the 25th Anniversary Buell 1125R – and try to grasp the significance of this very unique and pleasurable motorcycle. Maybe the colour will give it away – because it only comes in black with dark blue highlights. 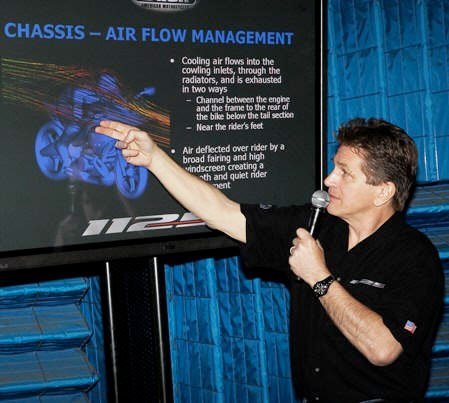 The launch: Erik Buell demonstrates his one-handed version of the Venus Butterfly

“That was the way I felt when I finally finished it,” Erik laughed. “Black and blue.”

Yeah, yeah… I know. There were Buells before this one reared its nasty-looking hammerhead head out of the mix. But none of them could truly lay claim to being a sportsbike. They certainly handled like one, but always lacked a meaningful top-end and were let down by the venerable (but hardly exciting or cutting edge) Sportster bits Erik was using to build them.

The 1125R has none of those issues, and is brand new from the ground up – or from the rider down, as Erik likes to see it.

At the heart of the matter is the serious new engine the 1125R runs – straight from the caves of those devilishly talented Austrian engine-building elves, Rotax. Buell claims a shade under 150bhp and a torque curve that resembles the flat plains of Kansas in the middle of its rev-range. Of course, it will also rev out and produce power all the way to its 10,500 redline. I saw 278km/h indicated on my speedo and Chris (who is braver and faster than me… and in front) mentioned he saw a few digits more on our run from… well, never mind where it happened. Just don’t doubt for a second that it did. I actually think it was the sheer wonder of being able to take something made in America to such abominable speeds that made us do it. 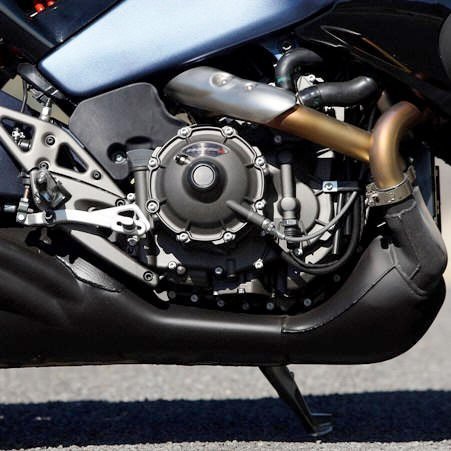 The new Rotax engine: a shade under 150bhp

But top speed is one thing – and really of limited concern to most riders. What’s really important is just how willing, flexible and broadly spread the 1125R’s power delivery is. As Wootton mentioned in his AMCN test, 6000rpm is indeed 160km/h in top. If you would permit me to compare this 72-degree V-twin to its smaller brother, the 1000cc Rotax that does such sterling service for Aprilia – the Buell’s is more powerful everywhere. And noticeably so. The 1125R is also geared much better for day-to-day riding and weekend scratching. Which is probably a big part of why they scared the crap out of some 1098S racers when they were taken out for a gallop on a few US racetracks and managed to place on the podium alongside Italy’s finest.

And there is other unique magic hiding inside that Rotax. The cams are driven via a chain to the inlets and via linked gears to the outlets, which means the engine is more vertically compact. Oh, and the oil reservoir for the dry sump motor is actually inside the motor itself. Not all that surprising for a bike that carries its fuel in its frame.

Another big part of its very impressive on-road performance is the handling. I’ll be hanged for sinner above the altar of the Road Gods if this ain’t one of the sweetest-steering and most confidence-inspiring handlers on the market today. Buells have always handled brilliantly, with a true-tracking and planted front end – and this one is no different. I should have had a million “special moments” navigating up and down Mt Hotham during the launch – a road I’ve ridden many motorcycles up and down over the years – and I had none. Not a one. It was certainly easier and less intimidating to punt up there than the MV Agusta 312R – which is THE handling superstar in my universe. Obviously the development work put in by Jeremy McWilliams and Niall Mackenzie has paid off very effectively for Buell. I shall buy the two of them beer should we ever meet.

You will need to pay attention to the much-reduced engine-braking – especially if you’re a V-twin fan. The 1125R has a cutting-edge vacuum-assisted hydraulic-actuated clutch. This means it’s light at the lever, while also producing a slipper-clutch-type effect so you don’t die when you’ve stomped down one gear too many. It was kinda strange at first. I expected (and needed) that ol’ time V-twin engine braking and got this hi-tech anti-die stuff instead. But it works a treat and it’s just a matter of getting used to it. 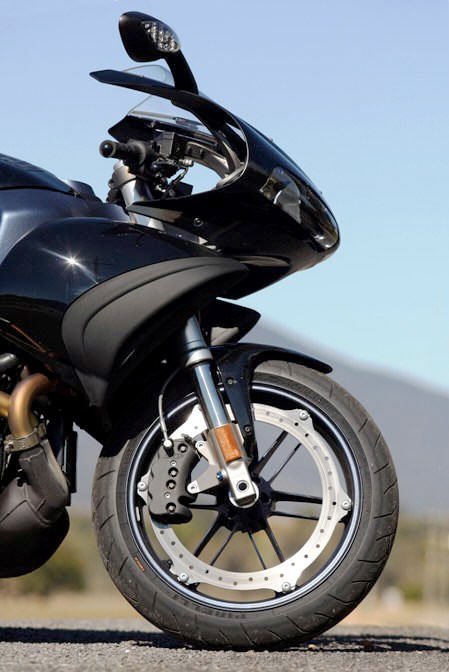 Right. So we’ve established that it handles beautifully and goes like bastard stink on a mission.

Hell, yes. It stops. That single 375mm rim-mounted floating disc on the right-hand side of the front wheel boasts an eight-piston Nissin caliper. You will stop – quite possibly with the rear wheel a foot off the ground, if you like. In normal, non-panic situations there’s lots of feel and no fade that I noticed – even after negotiating the same Mt Hotham corner 24 times so Lou could get the photo. The back brake is entirely indifferent to your needs, so that’s all quite normal.

Naturally, the bike is not perfect – hell, it is damn close, but…

I noticed that the motor tended to hunt a bit at lower rpms (2000-4000) – but once the engine temperature rose to 80 degrees and over, that nonsense stopped. It also took ages for the bike to warm up – well, “ages” is a relative term when you’re in Alpine Victoria and the morning’s ambient air temperature was in the low single figures. 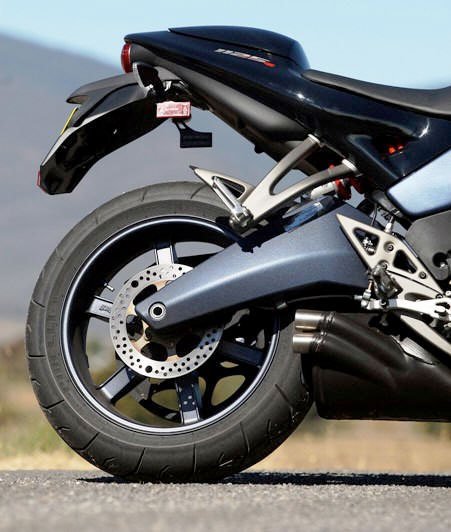 I also found the underslung muffler disconcerting. It pointed straight at the rear brake caliper, and while I don’t know what long-term effect this would have on your rear stopper, the muffler would be the first thing I tossed in the bin if I bought an 1125R. I understood Erik’s reasoning for keeping such a heavy item low on the bike (he remains amused by the fashionable practice of hanging relatively heavy mufflers under the bike’s seat – above and behind the bike’s rear axle), but that bodge-looking, anti-polluting mass of crap under the Buell needs to go.

Viewers were split about the bike’s unique looks, with the most attention being given to the big side scoops that feed the twin side-mounted radiators (Erik had them mounted there to allow him to push the engine as far forward in the chassis as possible without sitting it above the front wheel – which has a 54 per cent weight bias as a result). 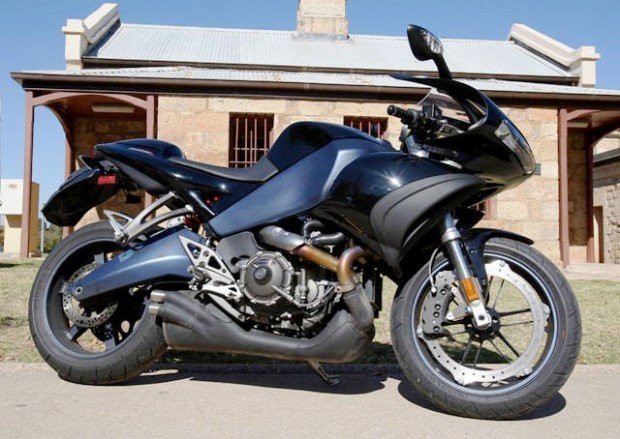 From where I sat, if the two pannier-looking scoops could be pissed off, the Buell would be a truly sexy and compelling thing to look at. With them, it’s just compelling. But, like all Buells, it is a uniquely stylish motorcycle – but I bought three Speed Triples in a row, so I’m hardly the style guide most people follow.

At then end of our two-day jaunt through the Victoria’s stunning high country (way to bung on a press launch, Harley-Davidson – 10 out of 10 for road choice!), I was deeply impressed by the 1125R. And by the very special bloke who made it.

It was impossible not to be.

Erik Buell has created the first true American sportsbike of the modern era. He has built a bike that can and will take it to Ducatis and Aprilias, with both its superb handling and its rich power delivery – all at a price ($17,495 plus ORC) that can be considered a right proper bargain.

And it was certainly, positively and absolutely worth the wait. 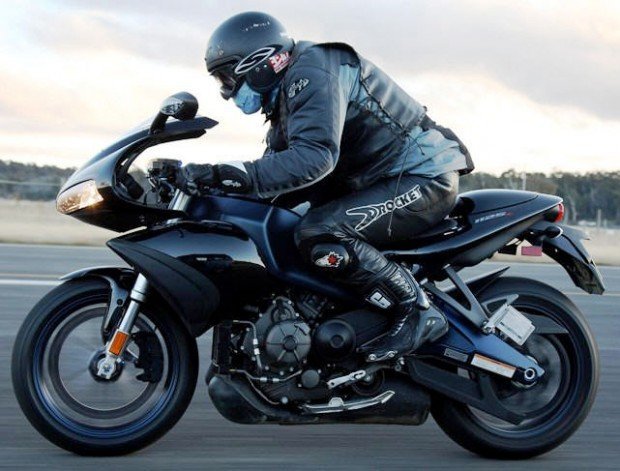 Worth the wait… Boris gets his head down