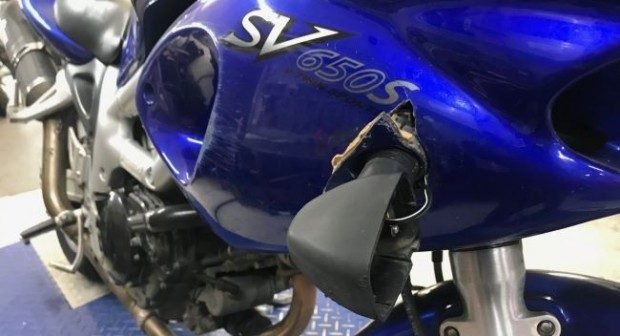 James from work said he was sick of riding on the train and he was looking for a cheap bike. I told him Ben’s SV650 was for sale. “Sweet”, he said. “I’ve got an SV650 back in Perth. They’re good bikes.”

We got to Ben’s place an hour or so later. He chatted to Ben, and inspected the bike, and kicked the tyres as is customary. He took it on a short test ride, and handed over the money in cash. “Well done”, I told him. “Now I will show you where the Gold and Fleece Hotel is, and you can buy me beer and a tasty lunch.”

We rode to Windeyer. He bought me a beer. I told him how they always ask your name when they take your lunch order so they can call you when it’s ready, and last time I said I was Mike Hunt. We ordered some steaks. I said my name was Barry McCauckner.

The SV front tyre was bald on the right hand side, so I said we should take the Queens Pinch road to the Castlereagh highway and minimise our time on the dirt. I took a wrong turn and we ended up doing about forty kilometres of gnarly dirt and coming out at Aarons Pass. I stopped before a real gnarly bit and apologised and asked James if he wanted to go back to where I took the wrong turn.

He did fine coming back on the Bells Line of Road until we were coming down Bellbird Hill at Kurrajong. He target fixated while halfway through a right hander trying not to lean too far on the bald tyre, ran off the road and just missed a rock wall before stopping.We kept going through Windsor, and it started to rain. I turned off into the car park of a large pub and told him it was very dangerous riding in the rain on a bald front tyre and we should drink beer until the rain stopped.

I called him up after I got home and said thanks for lunch.

I called up the pub and gave them my credit card number.

He got the bike serviced and put two new tyres on it and got his jacket sent over from Perth. He started riding it to the office. I showed him the twisty way. I told him I would take him on a day ride.

I took him over the Bells Line of Road to Lithgow, out of town via Magpie Hollow Drive, past Tarana to the O’Connell road, down to O’Connell and left back to Tarana. It’s scenic, and the road winds over hills and along the Fish River and crosses the railway line a few times. We rode briskly. He stayed off the sand on the road and didn’t hit the dead wombat. We stopped at the Tarana Hotel. “That’s the best ride I’ve ever had!” he said when we stopped.

He bought me lunch properly this time. And beer.

I told him next week I would take him on a long ride. “We will leave at eight, not nine”, I said. “I will show you the Bylong Valley Way. If ridden properly, it is insanely fast.”

The plan lasted until Tuesday night, when he texted me that he probably would have to cancel the ride because some guy cleaned him up on the way home. I replied that his texting finger seemed to work, and he messaged back that he had damaged his knee a bit and his motorcycle more than a bit.

He came in to the office two days later. He wasn’t even limping. He said the other guy changed lanes into him. I said he should have expected him to. I made sure to mock him for breaking Rule One. “I can’t believe you”, the product strategy manager said to me. “You infect him with this motorcycling thing of yours, sell him a motorcycle, and when the inevitable happens you don’t even show him any sympathy.”

“Of course I won’t be showing him any sympathy, John”, I replied. “If I did, he might start thinking that what he did was acceptable behaviour.”

The bike repairer James took the SV to said it looked like it was going to be a write-off. James looked pleased. He said that taking into account the purchase price, the tyres, the service and the registration, he calculated he would come out ahead on the deal if the other guy’s insurance company ponied up the amount he thought they would. It is people like James who made capitalism run the civilized world.

He told me the amount. He said he was going to be working out of the Perth office for six months and he would sell his other SV while he was over there and buy another bike when he came back to Sydney.

I did some mental arithmetic. “I reckon you could get a good used Honda VFR800 for that”, I told him. “They’re nice to ride, and practically indestructible. I’ve had two of them. You should try to get a test ride of one.”