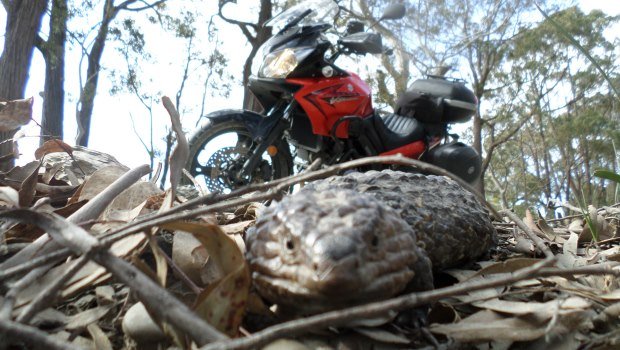 Bly and I filled up our tanks in Lithgow.

It was the third day I had been there. Thursday it was visiting the sick, Friday it was burying the dead, and Saturday it was filling the V-twins. The place wasn’t growing on me.

We rode the Tarana road down to O’Connell and cut across through The Lagoon, a small settlement that lacks many things, including, it appears, a lagoon. We went pretty hard at times. The Michelin Anakee 3 adventure tyres on the V-Strom are very good road tyres, despite being named after a political system under which no-one would manufacture adventure tyres.

What a stupid name.

I should go into motorcycle tyre marketing. I would make an adventure tyre called “Free Market Capitalism” but get a five year old to spell it, and sell millions of them.

We lunched at the Kelso Hotel, and drank beer, but not as much as I would have if I worked as a motorcycle tyre marketing consultant.

We took the Turondale road north, because it winds and is lonely and unpoliced. Bly headed for Sofala on the winding and newly paved Hill End Road. I took the Crudine road, because I keep going past it and wondering where it goes.

Surprisingly, it goes to Crudine. The road is dirt and well graded, and the Anakee 3 tyres work well on it. There is nothing at Crudine.

The surface on the Aarons Pass road was hard packed, but it looked like it was made of white clay and would be real slippery when wet. A shingleback crossed my path, so I stopped and took its photo. I stayed the night at Bens. It rained.

The next morning I had some toast and coffee and shot a kangaroo in the front paddock for dog meat. The rain stopped. I left. Ben followed me in the Toyota to the tar at Sallys Flat, because he thought I would crash.

I decided on the way home that I need better dirt tyres on the Strom.

Those Metzeler Karoos look the bomb.

What a stupid name.