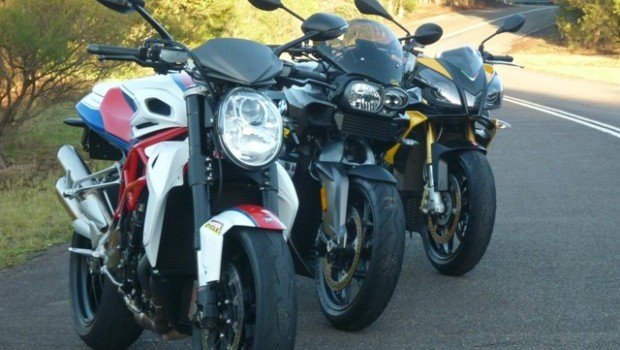 THE NUDIST COLONY – I

I had a beaut two days not long ago with the crew from AMCN, who thoughtfully invited me along for the magazine’s naked-Euro-bike test. The way the two days played out was a typical magazine test-scenario, and if you don’t wanna know how sausages are made, that’s too bad. I’m going to tell you anyway.

The most important thing with any magazine bike test is to get the images. To this end, we found ourselves at the Honda Australia Rider Training Academy (HART) at St Ives on the first day. In tow was a snapper and a videographer (and you can see his work on the AMCN Facebook site or on Youtube).

Now the HART track is not very long and not very wide and not very conducive to any kind of bike-testing per se. You would struggle to get anything out of third gear. But the object of the day was to shoot pictures and only test ride the bikes on the following day, so that is pretty much what we did.Though it was possible to get some front-wheel air off the bikes on one of the back-straight humps (which did put Das Fear into me a bit, until I got used to it), most of us did manage to explore how the jiggers handled slow corners — which is what the bulk of the HART course is. This was actually quite revealing and it was soon very obvious which bikes were fuelled well and which bikes would struggle in very tight stuff. 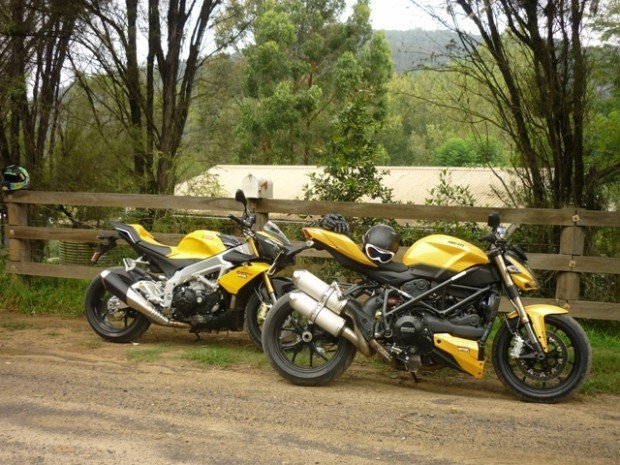 Just let me tell you that the now-stylistically ancient BMW is a superb bike at any speed and is simply astonishing in the tight stuff.

Let me also advise you that the MV is now splendidly fuelled and very tasty in tight corners — especially once you dial its adjustable steering damper and all of its suspension to “Maximum”.

The Aprilia struggled, with its drive-train slopping around like a sack full of chains when the going was slow. It’s the kind of bike that is only happy when you’re on it — and that’s hard to do at HART.

The Ducati (which wasn’t actually part of the AMCN test) was noticeably underpowered on the road the following day, but an utter joy to fang around the tight HART track. It’s so narrow and slim, it’s like sitting on a rocket-propelled pushbike, but its handling is incredible and the way it tips so effortlessly into corners is mind-raping.

The Benelli made more noise than I imagined was legal (even at idle) and eventually shit itself by stalling, then refusing to start until it had rested for twenty minutes. But it handled very well when it was pushed to do so. 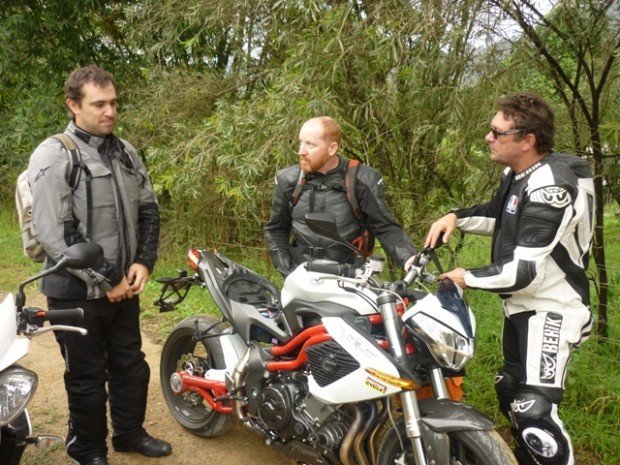 The Speed Triple was instantly the favourite and remained so for the two days of the test. All the testers loved it. It worked — and it worked everywhere and all the time. Wheelies, stoppies and general hooliganism were its bread and butter. It was fuss-free, easy to ride, easy to ride fast and ergonomically outstanding. It had none of the demanding fussiness of the MV, none of the annoying slop of the Aprilla, none of the madness of the Benelli, and while it may have not have possessed the supernatural agility of the Ducati, it outgrunted it by an order of magnitude. The only bike that it might not be able to match in terms of handling panache and sheer touring ability is the BMW. But then, as was mentioned in the AMCN test, the Beemer almost seems a different class of bike altogether. It’s also heavier than all of the others, and longer — and while you really do not notice any of that when the bike is on the move, it’s certainly something to consider if you can only afford one bike for everything.

The next day we all met up at the Pie in the Sky on the Old Pacific Highway and headed off for a good-sized loop through Peats Ridge, down to Wiseman’s and St Albans, followed by Wollombi and the Putty Road back to Sydney.

As it turned out, the Benelli put paid to that as we approached St Albans by refusing to proceed due to electrical nonsense that simply has no place on a modern bike, and the test was stopped. Naturally, we were all somewhat disappointed, and I was certainly looking forward to lashing these bastards along the mid-week Putty like a slavedriver beating his charges, but it was not to be. Nonetheless, I did get to ride all of them before the Benelli ended the day’s play. And you shall find my observances as you read on.

But here is my conclusion:

Because we are men, and men like structure, it’s incumbent upon me to arrange the bikes in some sort of personal preferential order — which was not as easy as I first thought it would be.

Since the Ducati is not really a direct competitor with any of these bikes, I’m not gonna include it in the running order. It’s a beaut bike — and no mistake. But it’s not the big daddy Testastretta, is it? No, it’s not. If it was, things would be different. But it is what it is. This is the hand I was dealt; this is the hand I’m playing.

The improvements made to the Speed Triple have catapulted it to the top of my heap. It has a whole new feel about it, thanks to the Ohlins bouncers and lighter wheels.

I couldn’t split the MV and BMW in terms of power and finish, but the BMW would do more things better.

The MV was stunning in terms of power and handling, but you could never be lazy on it, or it would kill you like the feckless dog that you are.

The Aprilia was just behind these two because it also demands you ride the Christing bastardness out of it all the time and that, quite frankly is not real-world for most.

And the Benelli was last — though if I was 30 years younger, it’d be my favourite.