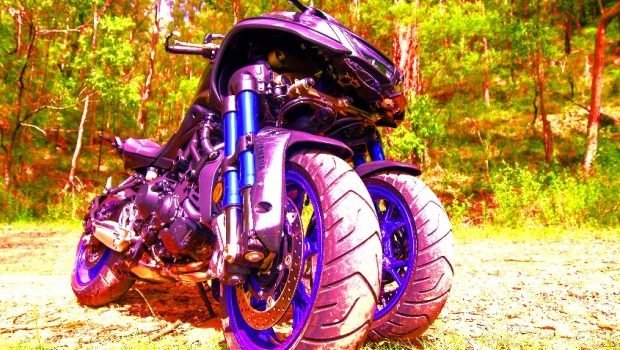 TALES OF THE NIKEN – EPISODE 6

IMAGES (THE GOOD ONES) BY NICK EDARDS / HALF LIGHT PHOTOGRAPHIC

In which our hero is compelled by his love of fine photography to spend several hours in various isolated locations with a dry-witted Englishman who secretly wants him to smash the Niken into a guardrail or flip it in a field, but has the good manners to only look mildly disinterested when that doesn’t happen.

“This city desert makes you feel so cold
It’s got so many people, but it’s got no soul
And it’s taken you so long
To find out you were wrong
When you thought it held everything” 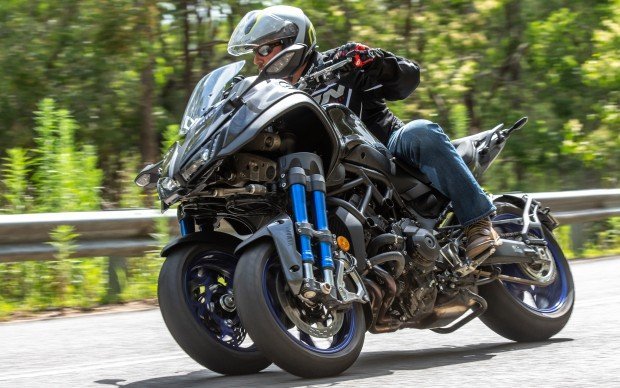 If I put a steel cage on the back of my ute, stuck some concert speakers playing Gerry Rafferty’s Baker Street on the roof, and jammed Scott Morrison and a shaved chimpanzee into the cage and used a cattle prod to make them fight, I reckon it would draw a crowd.

How could it not? It would be a proper spectacle. And people love such things.

Pulling up on the Niken at Jerry’s servo in Kulnura might not have had the same crowd-attracting oomph as the Scomo vs Shaved Ape death-match, but it was damn close.

As I went inside to pay for the petrol and stood behind two leathered chubbsters jacking up their Diabetes with cream buns and lattes, a crowd formed around the Niken.

I went back outside and it began… 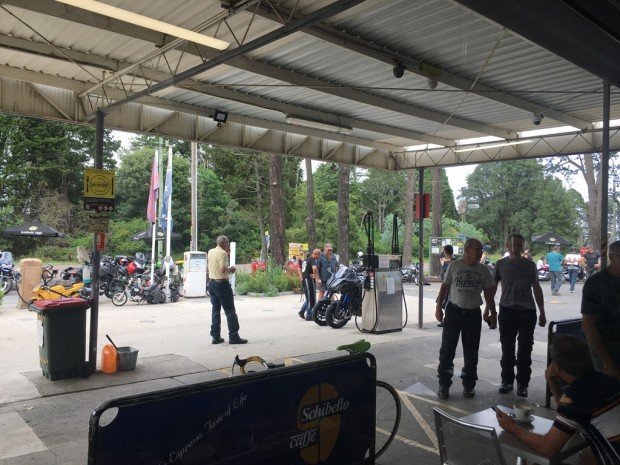 They were wary at first. In case it bit them. 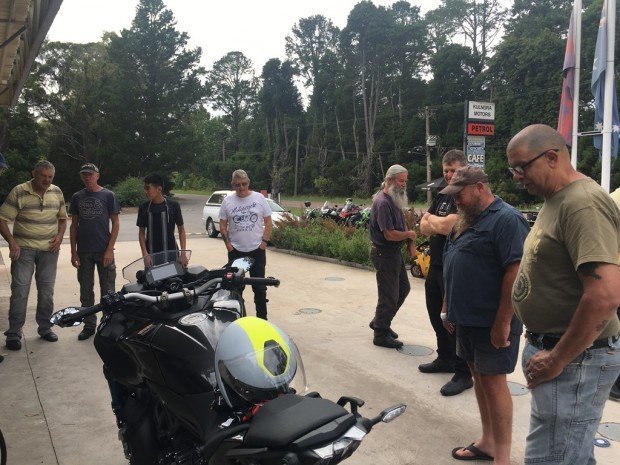 But then they relaxed. 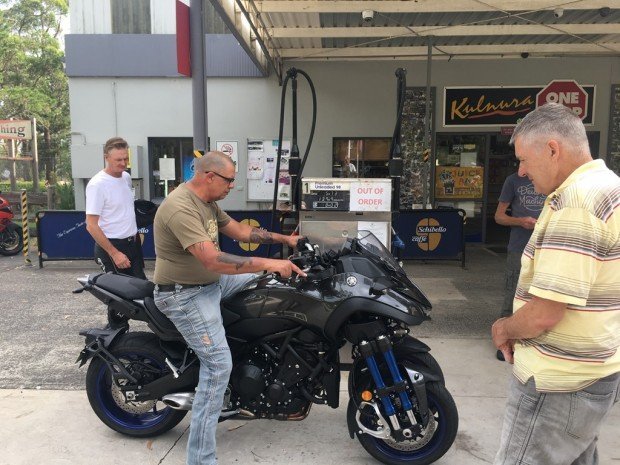 I even let them sit on it… 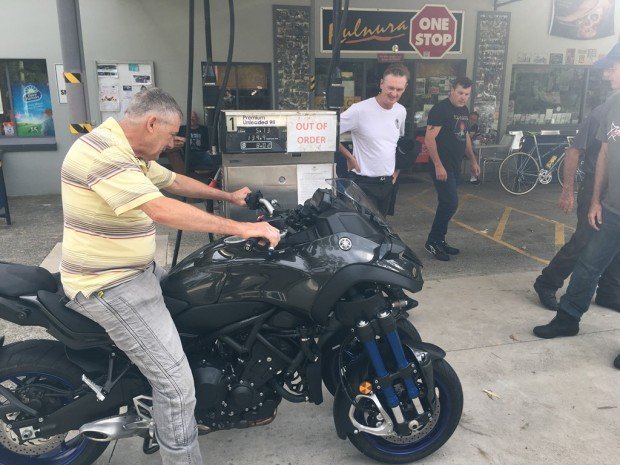 It was the very least I could do for such polite people.

It’s not. Go stand in the sun until it bakes some sense into you.

Slightly more than an MT-09 and heaps less than the Harley you’re riding. 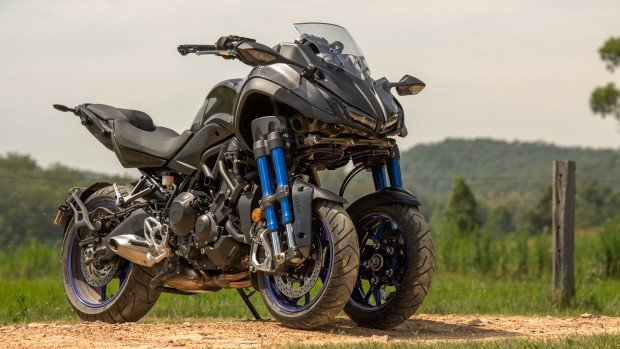 Ugly? I don’t think so. Bizarre? Hell, yes. Just like my fetishes.

“It looks heaps better in the flesh than it does in photos.”

Weird, huh? Just like my good self in that regard.

“Did you do that to the rear tyre?”

Yes, because Jesus hates a pussy with an angle-grinder.

I have seen an indicated 207 on the clock. 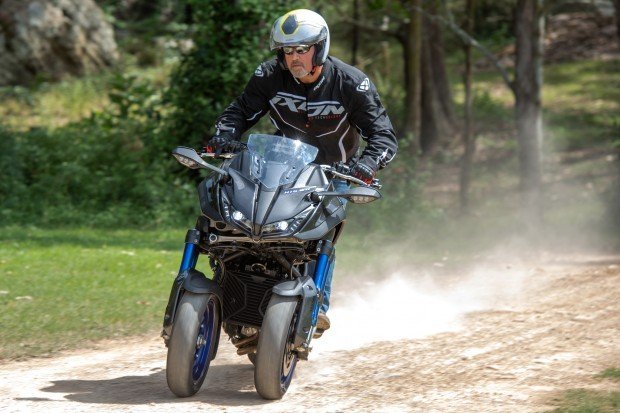 Relax, Toby. I’m too scared of dying to be a threat.

And so on and so forth.

Interestingly, not a single person I was chatting to said anything derogatory about the Niken. Real life is somewhat different to posting ignorant bon mots on Facebook, I guess. And it’s unlikely you’re going to call me a poof unless you’re ready to do one of those slow dances where I cup your buttocks and whisper into your ear, is it? 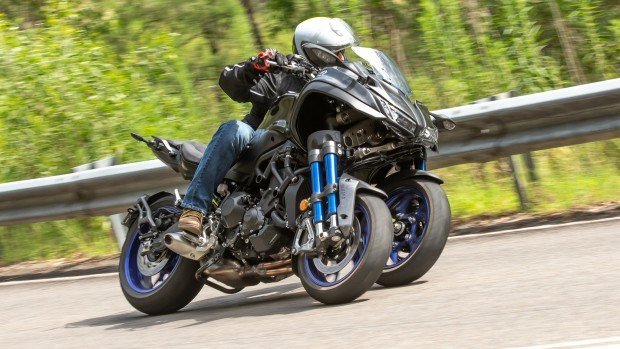 The overall consensus is the Niken looks…well, not at all like a motorcycle, and that is disturbing to the immensely conservative Australian motorcycle rider. And because he is disturbed, he will lash out with his challenged preconceptions. It’s a national trait. And it’s best done from the safety of on-line.

But it’s quite easy to have an uninformed opinion about the Niken when one is wallowing in ignorance.

So once again for the slow people on the Internet… 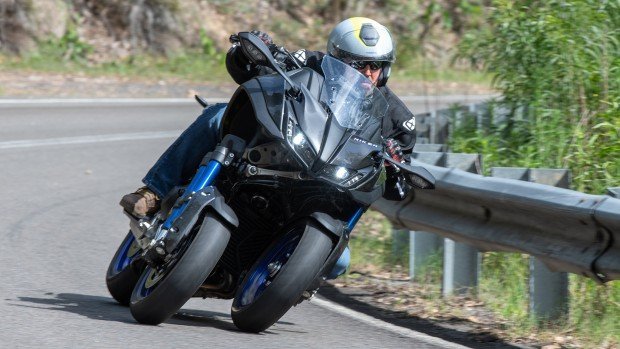 The Niken behaves exactly (seriously) like a bike with a great suspension and immense front-end grip. Go ride one. If you still hate it after that, then that’s fine. At least then you’ll know what you’re talking about.

It leans and counter-steers like a motorcycle and it will fall over if you don’t put your feet or the sidestand down when you stop. 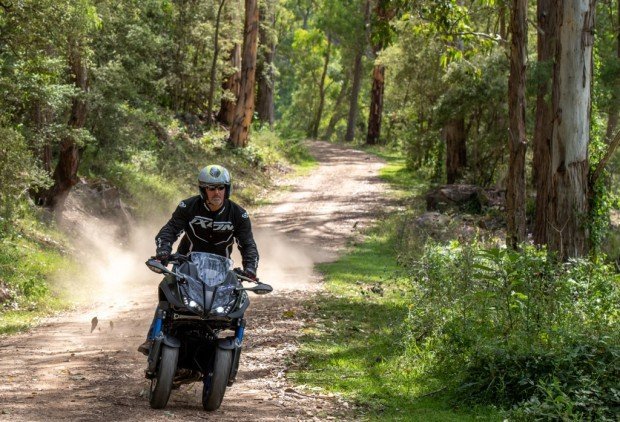 And now the tabletop, yes? No.

It is not at all like a Can-Am Spyder. At all, at all, at all. Please stop saying that. You’re giving me bum-worms, damn you.

A few blokes sat on it. A lot of people took pictures of it. And the general consensus was it was good to see Yamaha trying something utterly new.

And then Nick and I went to take pictures of me not crashing it into the scenery. 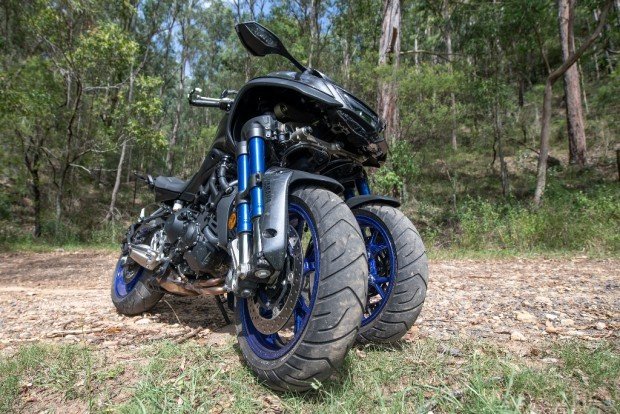 There’s a lot going on under there.

I did some sassy stuff on the dirt so he could perhaps capture my nascent Dakar-ness. But if that is not evident in the images, blame him. I was so close to death so many times…

We then adjourned to the road, so I could look majestically fast at slow shutter speeds, and Nick could try various vantage points for maximum art. I like it when he sometimes disappears from view or falls down an embankment. It’s like a magic trick. 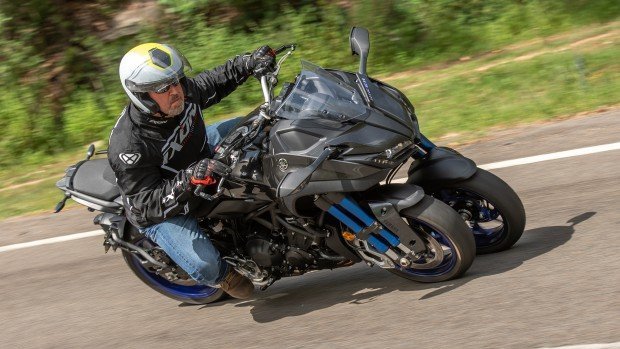 “Somewhere nearby is a beer that needs drinking.”

For my part, I spend much of the time trying to look like I know what I’m doing and the rest of the time worrying about getting caught by a Highway Patrol doing U-turns over double yellow lines. Unlike so many bikes, the Niken has a killer turning circle, so my exposure to illegality is brief.

Of course, no photoshoot is complete until Nick and I debrief over a beer at the nearest beerery. Which in the Niken’s case draws another crowd and the same questions. Only this time, it involved some French riders whose English was limited. My French mainly consists of ordering beer and hookers (Deux bières et une prostituée s’il vous plaît) and pleading Not Guilty (Non Coupable), so I waved my arms around instead, yelling “Tres bloody bon, mate!” 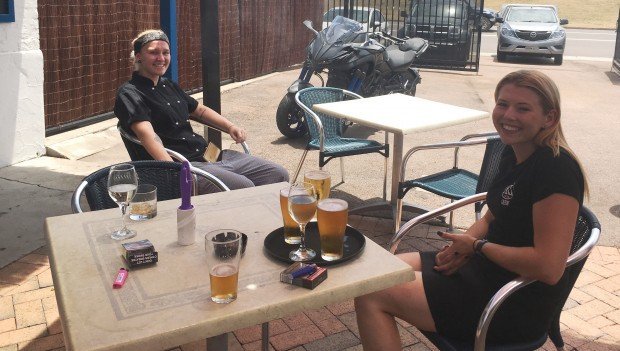 Smashed some schooners at my local with two ladies – one cooks and one rides an MT-09. But not in that skirt, sadly.

I then rode back home via the broken, narrow and always challenging Broke Road. I blessed the Niken’s insane road-holding abilities on every cracked-bitumen, decreasing-radius hair-pin I entered and exited.