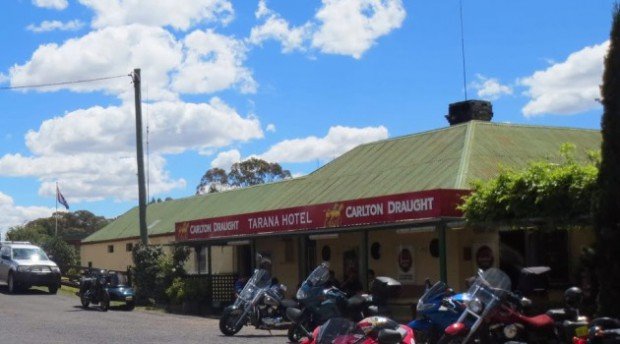 There were signs out after Bell saying “SNOW AND ICE ON ROAD” but I didn’t see any. The thermometer on the VFR said it was twelve degrees centigrade, which is pretty warm for up there in July, and even that last right-hander at the bottom of Scenic Hill that never gets sunshine looked dry.

Lithgow is a cold hole of a place, but I had four layers of clothing around my trunk, and I didn’t care. I finished visiting the sick around midday, and I figured I would have lunch before going home. No-one has ever been able to show me a place in Lithgow that serves a decent lunch and beer, but I knew that the Tarana pub was about half an hour away, and I knew that the road there had lots of turns in it and few highway patrol.

It’s a cracker of a road. “You are making good life choices,” I told myself as I parked the VFR outside the Tarana hotel thirty minutes later.

There was a R1100RS and a Tiger Explorer parked outside. Excellent, I thought. They will never talk to a VFR rider. I can lunch in peace.

The bar was warm. I ordered a beer and a burger, and formulated my plan. It was to drink my beer, and when the burger arrived, get another beer, and sit at one of those tables over there on the right and get outside both of them.

I considered this question for a few seconds, and then I said “I like it fine.”

There were so many ways to direct this conversation. My VFR was made seven years before the VFR1200 first hit the market, so I could take that angle, but it probably wasn’t surreal enough.

“I bought the 800”, I said, “as a result of a complicated thought experiment that most people have difficulty in understanding.”

“To understand my reasoning”, I said, “you must first think of the VFR800 as your childhood friend Jennifer.”

To his credit, he was only rattled for a second. “Um, okay”, he said.

“And also”, I continued, “you must think of yourself as a pony.”

“Never mind”, I told him. “There are plenty more fish in the sea.”