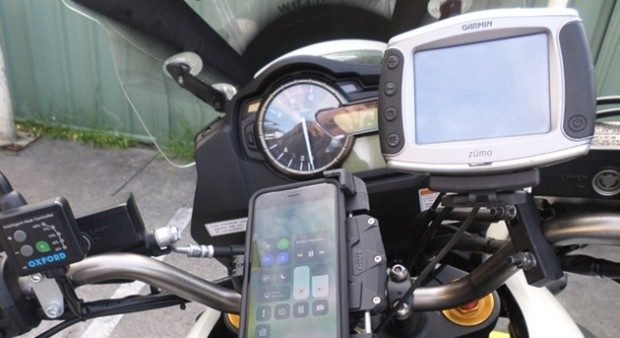 Boris said the Givi guys wanted me to try out their S920L Smart Clip. It’s a method of attaching a smartphone to a motorcycle.

I’d been using the RAM-mount X-grip thing to hold the phone on the bike for a year or so. I got used to stopping and looking for my phone beside bumpy dirt roads. There was that one time on the Castlereagh Highway when I was riding with Gonzo that it came off too. He laughed at me. I got him to call my number and found it ringing in some tall grass a few hundred metres back from where we stopped.

To be fair, you were supposed to hook some rubber band thing around it to stop it falling out but sometimes I forgot.

Installation of the Givi S920L is, like Netflix and Chill night at the Degeneris household, tool-less. The mechanism which attaches it to the handlebars is ingenious, but bulky. Pic below related. 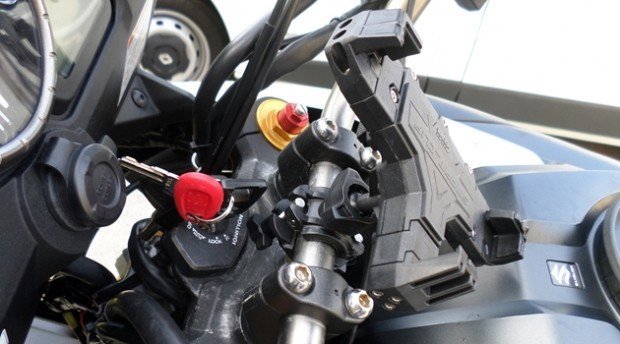 It wouldn’t fit on the left because it fouled the clutch master cylinder, and it wouldn’t fit on the right because it fouled the brake master cylinder. It looked like I might be able to get a small RAM-mount thing to fit it, but a quick on-line search told me the small RAM-mount things are as rare as a moment of fun at a Hanna Gadsby concert.

So I took the GPS off and re-mounted it on the right, and mounted the S920L in the middle. Then I went down to the bike shop and got them to take the Arrow exhaust off and put the standard exhaust back on.

Then I rode 380 kilometres to Port Macquarie, most of it on the motorway. I left at eight. I dismounted in the pub car park a bit after midday. I listened to music on my smartphone on the way. I got off the bike feeling relaxed. I could have ridden another 380 kilometres, easy.

I was in Port Macquarie because it was Phillip Island MotoGP weekend, and about twenty of us who used to ride there every year got sick of the Victorian police force pulling over every motorcycle that crossed the bridge to the island for licence checks and generally harassing anyone on a motorcycle. We decided a few years back we’d spend our money in another state, so we find a place with a cocktail bar and a big screen TV near some winding roads and go there on the relevant weekend and spend money.

We watched the Moto3 and the Moto2 and I had pepper steak for lunch and drank beer and dry martinis and we watched the MotoGP and had ourselves a time. It was hilarious.We went out for dinner at some Thai restaurant later and that was hilarious too. I called Boris after dinner. “I have ridden 380 kilometres of motorway today”, I told him. “Why don’t I visit you tomorrow? That way I can ride home down the Putty road and maybe go around a corner or two.”

So the next day I rode back down the motorway for another 380 kilometres and had a beer with Boris at some old outlaw pub out west. I listened to music on my smartphone on the way, but those smooth roads weren’t testing very much.

I called Ben. “Let’s have a beer next Sunday”, I said. “I reckon if I leave at eight I’ll be there by twelve thirty.”

It was rough and bumpy heading north of Bathurst to the Hill End Road too, and the last twenty kilometres before Ben’s place are dirt that needs grading. The phone stayed in its holder. Ben had the beer out when I arrived. “Did you see the MotoGP last week?” I asked him.

“Yeah”, he said. “How about that crazy Zarko running into Marquez at three hundred kilometres an hour?”

We had a few beers and caught up on each other’s news. I left about three thirty. The phone didn’t fall out on the dirt again. I like rambling ballads, and the phone served me The Sultans of Swing and Lily, Rosemary and the Jack of Hearts back to back on the highway before Lithgow. I took it as a sign from the universe.

The universe also made sure there was nothing in the way on the fun bits of the Bells Line of Road, so I exceeded the speed limit by a fair bit in parts, and touched my right footpeg on the ground a few times.

I got home about nineteen hundred. The girls were making dinner. My wife was chopping onions. I could smell them from the front door.

“I can’t believe you’re not crying when you do that”, I said.

“The secret”, she said, “is not to form an emotional attachment to them.”