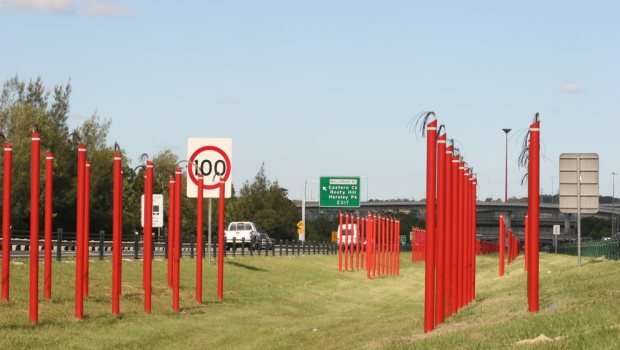 Riding the Triumph Thunderbird Commander back from a leisurely jaunt to the Blue Mountains, I turned on to the M7 Motorway at the Light Horse Interchange. I probably wasn’t paying as much attention as I should have been, because the “art” at that interchange pisses me off.

I don’t think so.

It is lazy art. People driving past at hundred kilometres an hour are supposed to look at those red sticks and get the link to horses and soldiers and Flanders poppies and blood. The bits of wire sticking out are supposed to represent the emu feathers in the hats of the Light Horse soldiers, but look nothing like them.

What this installation says to me is “Crap artist. Can’t do horses, does sticks instead. Can’t do emu feathers, does bits of wire instead.”

They should rip it down and put something decent up that represents awesome killers of the enemies of the state on horses. Something like Gilbert Williams Bayes’ The Offerings of War that stands outside the NSW Art Gallery. Something that says that 450kg of war-horse will shortly be delivering a large fit man with a Short Magazine Lee Enfield that has ten in the magazine and a nasty spike at the end to encourage some attitude adjustment. Something big. About the size of “The Mother Calls” that the Russkis put up outside Stalingrad. 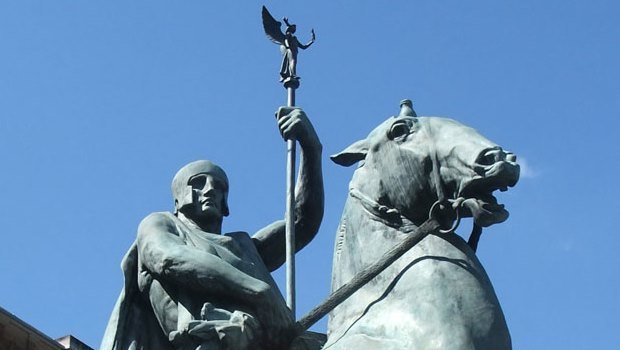 As I say, I was pondering these matters as I merged from the M4 to the M7, and I didn’t notice the guy on the bicycle coming along the M7 that decided he would merge with a bunch of traffic going about 80 km/h faster than he was. I would have thought that the markers on the road indicated that he should stop his bicycle, wait for traffic to pass, and then cross the on-ramp; but apparently he didn’t.

It made me wish that I was a godly man. Readers who listened in Sunday school may recall the prophet Elisha, and how he went up from there to Bethel; and as he was going up by the way, young lads came out from the city and mocked him and said to him, “Go up, you baldhead; go up, you baldhead!”

Then, apparently, he looked behind him and saw them, he cursed them in the name of the Lord, and two female bears came out of the woods and tore up forty-two lads of their number.

I only had one bicycliste that needed murdering, not forty two children; and I would have preferred hippos if you get a choice. Hippos are total bad-arse killers, and cause the greatest number of animal-related killings in Africa each year, and I think there would be more amusement value in a pair of hippos coming out of the red sticks and biting the lycra-clad boor in half than in bears tearing him to bits.

Alas, I am a profane and ungodly man, and the Lord failed to produce the necessary wild animals.

And I accelerated away, thinking to myself that it was a pretty lame retort.

Why couldn’t I have hippos? The late great Steve Irwin once crossed a river with hippos in it and reckoned it was the most dangerous thing he had ever done, and he used to wrestle four metre crocodiles and spit back at taipans. Hippos are awesome.

It would have been better with hippos.