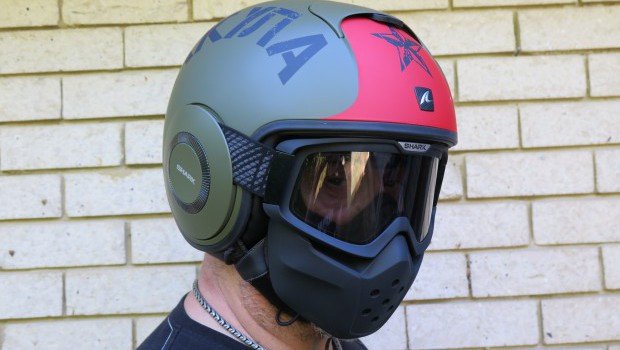 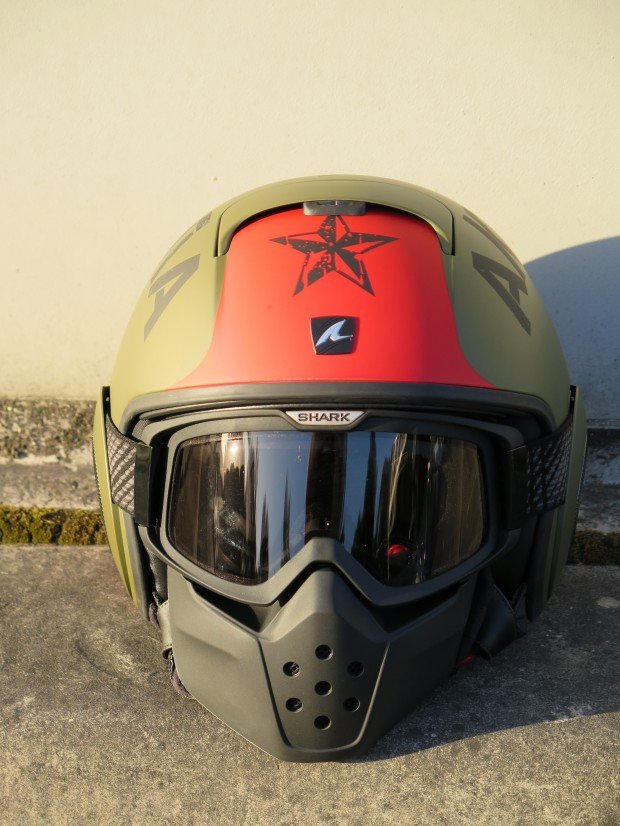 No question about it.

But it is not lovely like field of wildflowers with butterflies flitting over them.

Its loveliness is of a much a darker and edgier type.

It is my kind of lovely. 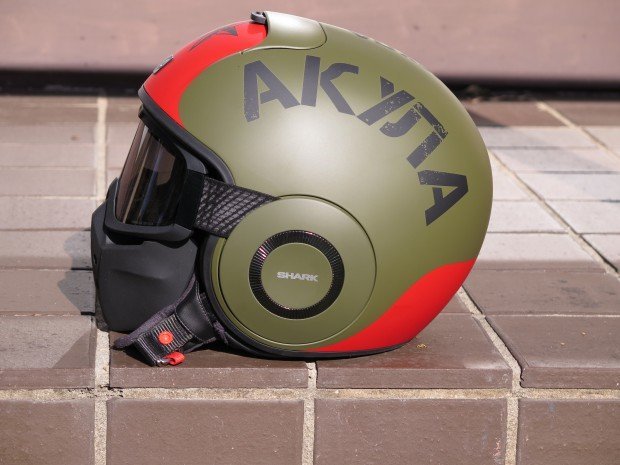 See that little plastic wedge at the top of the vent on the crown of the lid? That just pulls completely out when you want the vent open. Simple and effective. 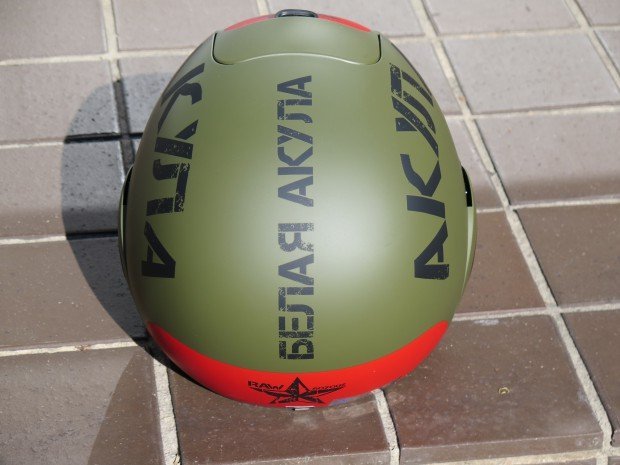 Once again, the ever-obliging Dave Maddock understood this.

I nodded. I pretty much want everything to do with motorcycles in black all the time.

“Have you seen the other colours?”

Dave obliged, but he had got no further than the colour you see here (and there are quite a few options) when I squeaked.

It could not be any other one.

It had to be the Soyouz – which is the Russian word for “union”. You might have heard it back when Russia was called the Sovyetski Soyouz, ie. The Soviet Union.

And it also had to be the Soyouz because the Soyouz had Cyrillic writing on it, thus appealing directly to my inner Slav.

What’s more, the writing was not just a random assemblage of Russian letters. It actually said something.

It said “AKULA” on either side in big letters and “BELAYA AKULA” in smaller script down the middle.

There are several wonderful aspects to the lid. 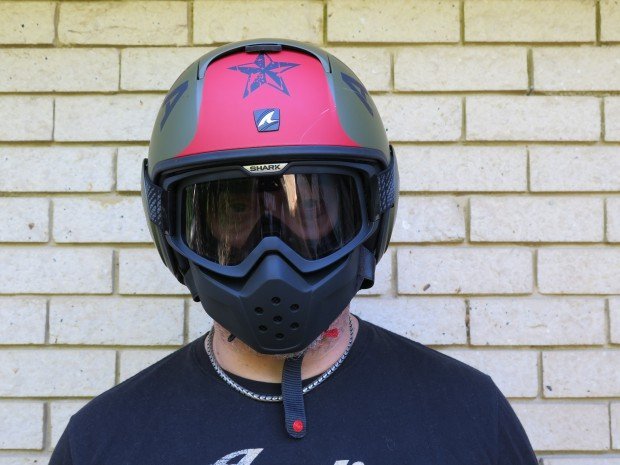 The tint on the goggles is not so dark that you can’t wear them at night. No, seriously. You can. Well, I did and it was fine. And yes, the strap does clip out of the way. I just forgot to do it. 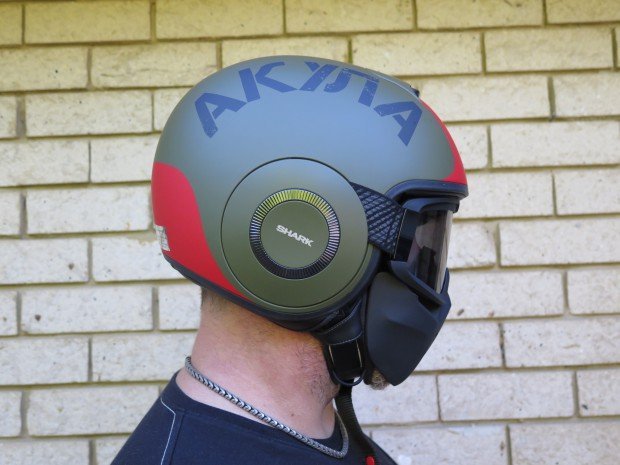 “Yes, Tovarysch Stalin. I shall drop every bomb in the plane on my target.”

Firstly, it doesn’t fog up in the rain like a full-face lid.

It can’t fog up because your nose, the primary fog-maker in the helmet paradigm, is not exhaling lung-gases into the goggles. It is exhaling into the poly-urethane muzzle. Also, the goggles are double-paned, so it’s almost like one of them pin-lock system on the full face visors. Clever, huh?

Secondly, the shape of the helmet itself mirrors the shape of the human skull – so it is a little elongated in profile. The result is very favourable aerodynamics – proof positive that we were always meant to ride motorcycles au naturel.

Thirdly, it looks great – and therefore, you look great. At least until you take it off and then you’re on your own.

Fourthly, the venting doohickey that lives in the crown of the lid above the star is kinda cool. It’s a completely removable square plastic wedge. Take it out, stick in your pocket (or on your keychain) and the Raw is well-vented. Slip it back in and the vent is closed for when it’s raining or you are riding through northern Canada in July.

The round ear plates, which also aid the helmet’s outstanding aerodynamics, pop out for two reasons: fitting and removing the goggles, and wiring up the helmet – which already has the cut-outs inside) for Sharktooth, Shark’s own Bluetooth communication system. You will forgive me, but I have no truck with that kinda stuff. I do not wish to talk to anyone when I’m riding, and I can happily sing all the songs I wanna hear. So I can’t help you out with any personal views on Sharktooth.

The dual-pane, padded and fully vented goggles use Carl Zeiss optically-correct perspex and are simply top-notch.

Clearly, Shark understands that you will, ultimately need to replace the goggles, so they will be available in the fullness of time. As will an assortment of muzzle bling, so that could be pretty cool. 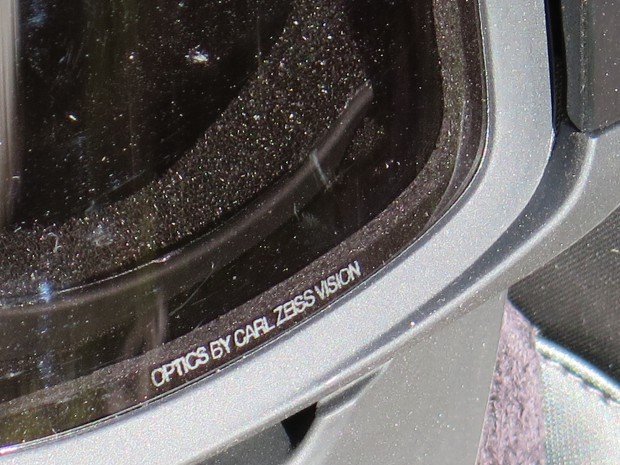 Quality optics – no doubt about it. 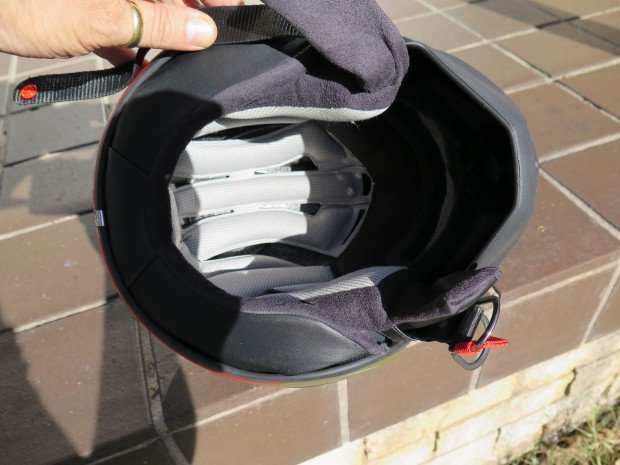 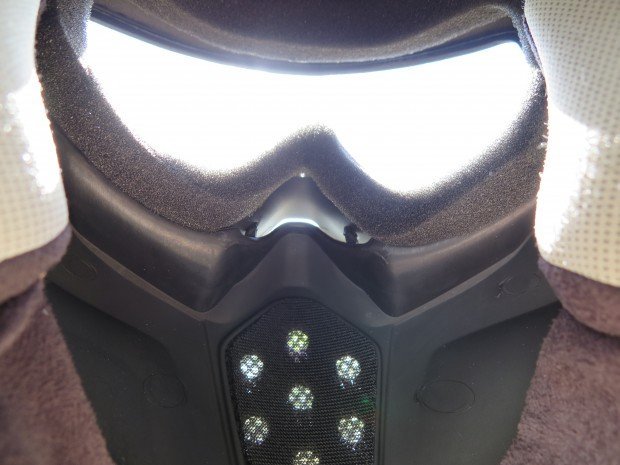 The view from within. Very plush and very soft. 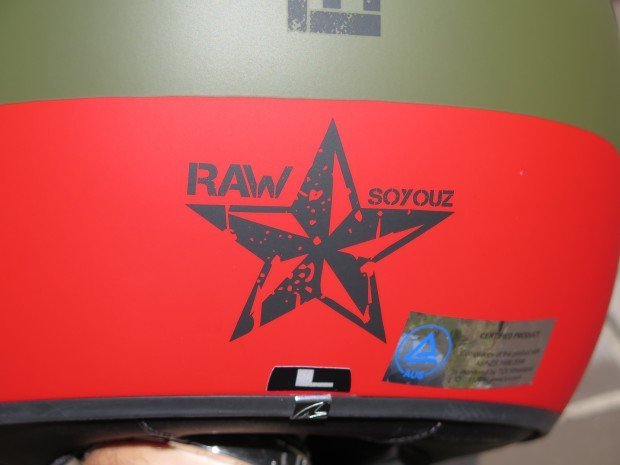 The star is not really Soviet air force. More Soviet prisoner – but that’s cool too.

At speed? Well, I have had it up to about 190 on a naked bike and there is no lift and no buffeting when you turn your head. My mate, Scrambles, who has an identical helmet, has also been speed-testing it at similar velocities and says it is as stable as an Amish marriage.

I am thus of the view that the Raw not only is the Raw a stylistically sexy bit of gear, there is actually practical substance to its sex-appeal. It doesn’t just look good, it also works.

There is however a slight caveat to my love for the Raw.

I can’t scratch my face when it’s on.

Because when it’s on, it’s on. That’s it. It is not a simple matter of flipping up the visor and scrabbling at your dial like with a full-face. The goggles can be flipped up, but you need to stop and perform the operation, and over time, that action will wear out the foam padding. If you want the goggles off, pop off the side-plates, clip off the goggles and you’re good to go. You can, if you’re some kinda of strange psychopath, un-hook the goggles from where the straps join them on the outside edges. But this is a fiddly operation, as you will discover when you’re assembling it all. The rubber edging of the goggles is soft and while it ain’t hard to hook them up to the straps, it is a little fiddly. Yes, drinking beer during assembly makes things worse.

Does this impact adversely on my view of the lid and its overall efficacy?

Nyet. Not at all. It’s little fiddly foibles are as naught when weighed against its positives.

So, there we have it, tovaryischi.

Is Raw. Is excellent. And you know what?

The older and more battered it gets, the better it will look. 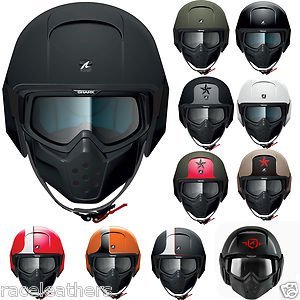 There are many colours and more coming.

Everyone seems to want to know how the Raw compares to Bell’s Rogue – the other new kid on the block.

They are two altogether different products.

The Rogue is a pure open-face lid with a removable muzzle. It always feels like an open-face lid, muzzle on, or off.

The Raw is more of a full-face lid, which incorporates goggles and a muzzle that is attached to the googles.

Yes, the muzzle can be removed and the goggles can sit alone on your face.

Yes, the goggles can be removed and the helmet then becomes an open-face lid. With the goggles and muzzle in place, the Raw feels very much like a full-face lid. Face coverage is total.

One is not better or worse than the other.

The difference between them is too vast to allow such a comparison. 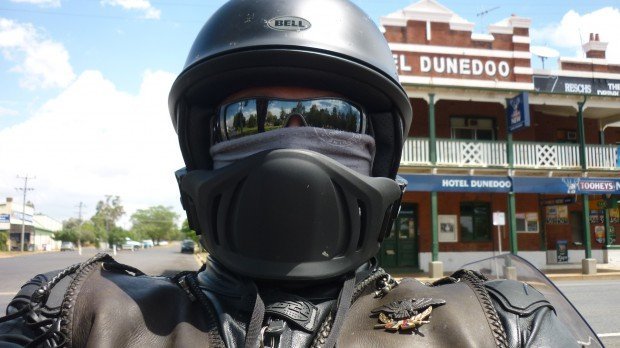 See? They are not at all the same.