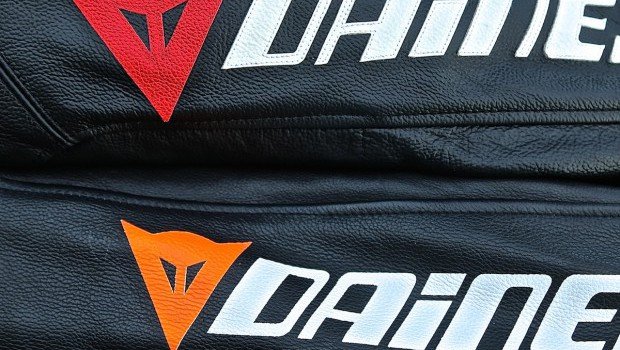 There is a lot of truth in that old saw: “You get what you pay for”.

If the purchase price of something sounds too good to be true, it always is. Drugs, hookers, Smartphones – it applies to everything.

And this has never rung truer than in the delightfully sordid world of big-name motorcycle gear knock-offs. And the market is huge – especially given how label-conscious many motorcyclists are.

This is especially true of the younger riders, many of whom don’t have a lot of money, but still feel the need to adorn themselves in top-shelf gear.

Which brings me to the example pictured here. 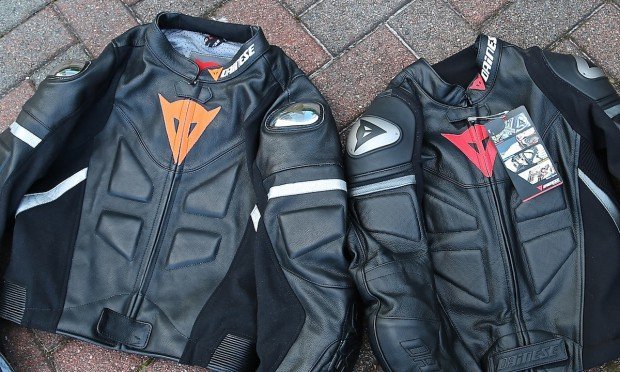 It came about thus:

Young bloke meets an older bloke on the street near his bike.

“Listen,” says the older bloke, glancing conspiratorially up and down the street. “Have you heard of ‘Dainese’ leathers?” 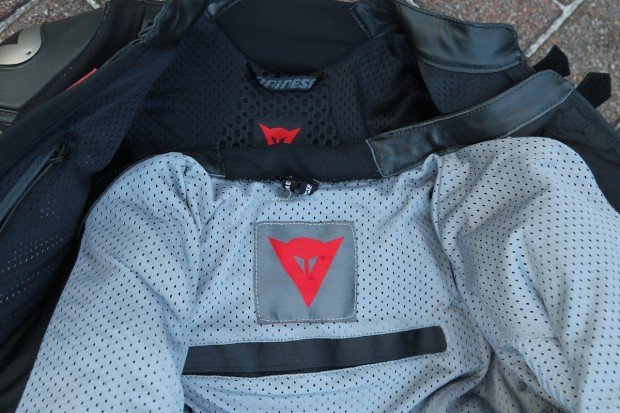 The lining is a dead give-away. As is the cheap shitty stitching on the logo label. 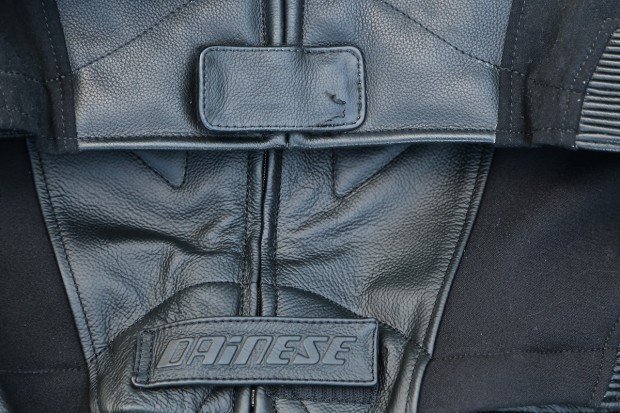 Velcro tab at the bottom of the jacket. The real deal is easy to spot. 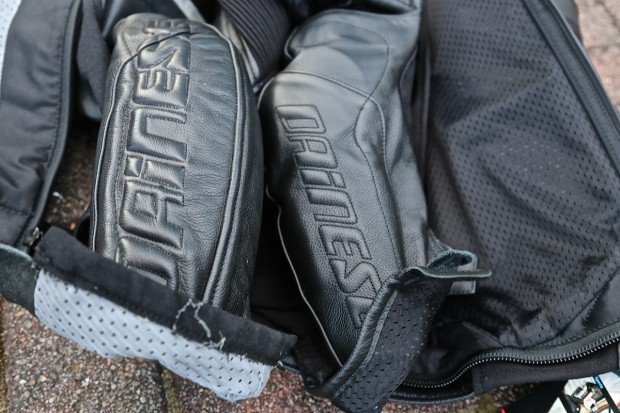 These are the sleeves. Compare the stitching and finish of the fake, to the real one on the right.

Of course the kid has heard of Dainese leathers. Everyone who rides a bike has heard of the brand. But it’s a top-shelf item. Dainese leather jackets can cost anywhere from $600 for on-sale items from the importer, to $1200 for the latest and greatest.

The kid nods. The bloke looks around to see if anyone can overhear him.

“I’ve got some two-piece suits direct from the factory…you know, that have gone out the back door, and I can get you a great deal.”

“No!” the older bloke says, throwing up his arms in horror. “I’m not a thief! Here’s my card. I am an authorised agent. These are suits that are end-of-model run-outs. They are surplus to the production run. The factory moves them separately to the stuff they send to the importer. My mate goes to Italy to pick them up twice a year.”

Of course, the kid has no way of knowing that Dainese suits are made in the Ukraine, and you’d be going to Kiev to get them from the factory. 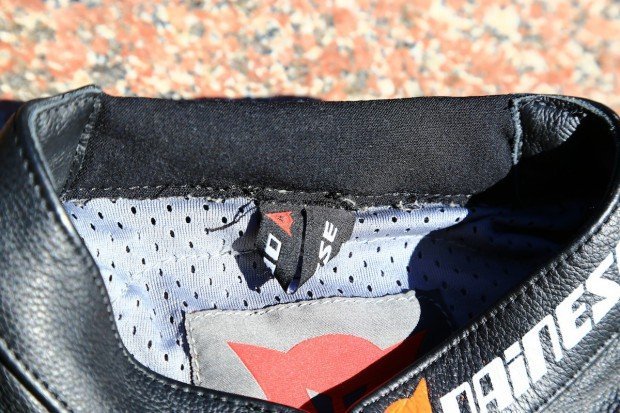 The collar detail of the fake is painful to behold. 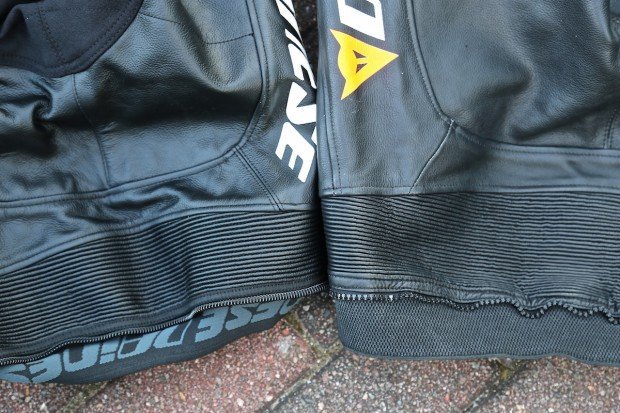 Real on the left, fake on the right. Cheap zippers, cheap stretch panels and half the stitching that needs to be there.

Great deal, huh? And it’s all about safety. In the best gear there is.

The kid agrees, they exchange phone numbers and Emails and they set up a time and place to do the deal.

The kid’s job is to get his size to his new mate, then get the cash, and get to the meet point to pick up the suit.

The deal goes through no worries. The suit is a Dainese. It’s got “Dainese” written all over it.

The kid is overjoyed. Not only did he get a killer bargain, he’s now styling with the best of them. 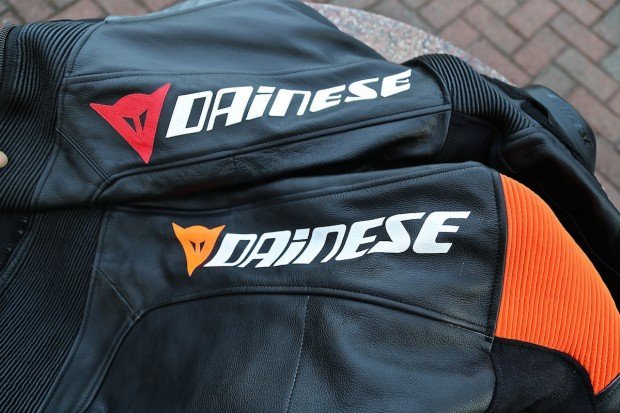 The pants are also easy to spot if you know what you’re looking for. Real on top, fake on the bottom. 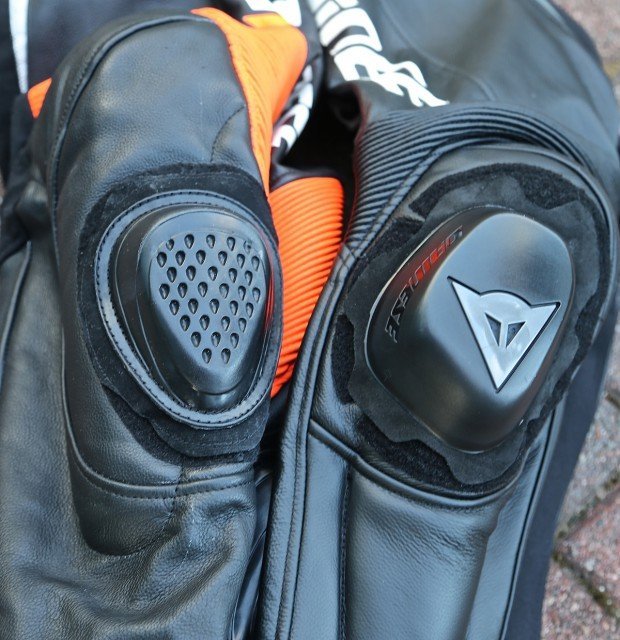 The slider on the left is a copy of a Lightech slider (made in Italy). The copies are pieces of shit. They don’t injection-mould them so the quality is akin to you just melting some old pieces of plastic together on your stove.

His “genuine” Dainese suit is a shitty knock-off from a city called Sialkot in Pakistan. There are more than 200 motorcycle clothing companies registered with the Sialkot Chamber of Commerce. And there are literally thousands of small businesses that provide these companies with everything from footballs to biker vests to “genuine” Dainese and Alpine Star suits.

These companies advertise on Gumtree and eBay and even have “reps” like our mate above.

Unsuspecting, trusting, naïve young riders who struggle to put good tyres on their bikes are easy targets. Like all people of their generation, they are brand-whores. They see “cheap” big-name bike gear, they can’t yell: “Take my money!” fast enough or loud enough.

And then they are left with shit that will disintegrate in the slightest accident, or even worse, someone with a real Dainese jacket will spot their fake and publicly humiliate them.

I called up Ed Brown from OZMC leathers (the importers of top-end Gimoto race leathers) and asked him to have a look at the two jackets – one the fake and one the real deal, which I borrowed from Motorcycle Accessories Supermarket, the authorised importers of Dainese gear. It’s always good to get an expert’s opinion in these cases.

“There’s no such thing as “back door Dainese” or “factory-leakage Sidi boots”, Ed explained. “They’re all fakes. Five years ago, you could pick one out from ten metres away. Some of the new ones, you really have to look up close. This isn’t a fake Ralph Lauren shirt we’re talking about. This is what is going to protect your flesh and bones if the shit hits the fan.”

Personally, I feel that if you’re stupid enough to think you’re getting real Dainese gear for half the price, then you deserve all the skin-grafts and humiliation you’re gonna get.

But entirely fair, because I don’t like stupid people.

My thanks to the talented Jodie Robinson for the pictures.