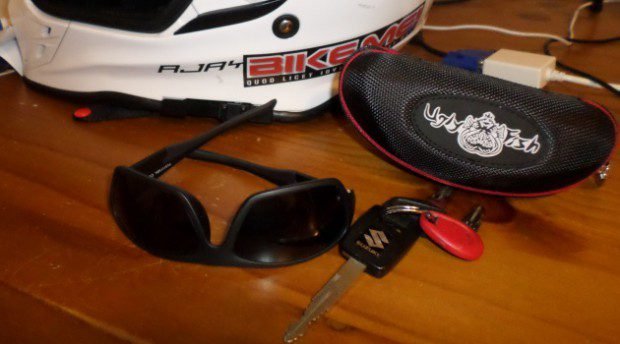 Boris gave me the good news on Saturday over a beer. “The Goggleman guys want us to evaluate one of their prescription lens rigs”, he told me. “I told them I wear contact lenses, so you will be doing it. I need five hundred words.”

“I am not qualified to write about sunglasses”, I complained. “What do I write? ‘Put on glasses. Didn’t get eye cancer’?”

“Good start”, said Boris. “Four hundred and ninety three words to go. And you are as qualified as any other blind bastard.”

So I sent my prescription to Goggleman. I chose something from their catalogue. Their rep David said they can do wrap-around prescription lenses. I didn’t know that was even possible. David said it wasn’t, but they did it anyway. I chose some Ugly Fish frames that wrapped around.

They arrived after a couple of weeks. They come in a zip-up case with an attachment that lets you clip it to your belt. I put them on and they fitted well and the view was clear, even at the periphery.

The next day I took them to work. I put them on while wearing my commuting helmet, and the arms hit the back of the gap where your ears go in the helmet, which made the glasses sit too far forward and too low on my nose.  It felt a bit weird. It took me four days to work out that you can bend the arm tips in and they fit perfectly in any helmet.

The sales manager said “New shades, Al?” as I was walking out of the car park, and I said “Yes” and he said “You look like a serial killer”, and nodded approvingly.

I went for a ride with Bly the next Friday. I wore the glasses under the Shark helmet I use for longer rides. They fitted just as well. My peripheral vision was just as clear. The world had a smoke coloured tint which seemed very Australian. We went up the Pacific Highway past Newcastle, and rode the Wootten Way, and went to the motorcycle museum at Nabiac. Bly borrowed my smartphone and took a photo of me wearing the Goggleman glasses outside the museum.

“I can’t use this photo on the BIKE ME! web site”, I told him when I saw it on the phone. “There are women in the readership. They will be fizzing like salted slugs if they see this, and will probably perform indecent acts or have an attack of the vapours. I will not be responsible for this, so I will take a still life of them later.”

We rode over to Gloucester on the delightful Wallanbah Road and the Bucketts Way and had lunch at the Avon Valley Inn at Gloucester. I sat on the front verandah in Goggleman’s glasses and sipped my beer and chatted to Bly while waiting for my beef salad. There was a faint fizzing sound from the street.

We had lunch and headed home via Dungog and the Wollombi bends. It got dark half way. I left the sunglasses on anyway.

I got home around 1800. I seemed to not have eye cancer. I walked in the front door and the girl-child said “Hi Dad. New shades?”

“They’re not shades”, I told her. “They’re nightmare vision goggles.”

I gave them to her. She put them on and looked around. “Everything looks exactly the same”, she said.