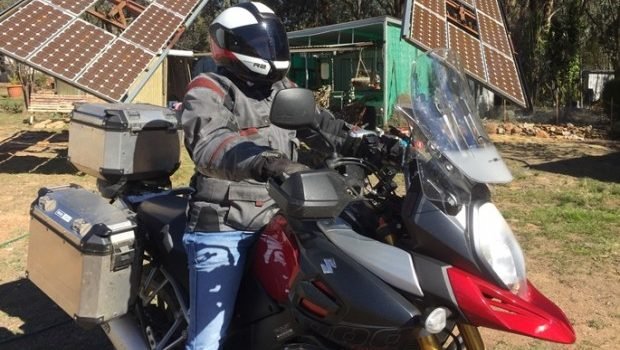 PLACIDLY AMIDST THE NOISE AND HASTE

Boris gave me a Schuberth R2 helmet to try before I went up to Drake to not watch Froggy get married. It was red white and black. It looked really sharp. It was way quieter than my old Shark. It was really light: 1350 grams.

Suzuki V-Stroms have a reputation for making lots of air turbulence off their windshield. Mine is no exception. Having a lighter helmet meant it moved more when buffeted. It was a pain in the neck after about two hundred kilometres.

I researched on line. A strong body of opinion favoured replacing the windshield with a Givi Airflow, so working on the premise that nothing will go wrong if you just take the advice of random strangers on the Internet, I bought a Givi Airflow windshield.

I fitted it on the Thursday night. It only took a few minutes. On the Friday morning, I went out to Penrith to get the suspension on the ‘Strom tuned. About forty minutes of the trip was on the motorway at 80 to 100 km/h, and I wore my commuting helmet, which is not a quiet helmet.

It was really quiet this time.

I hung around Penrith all day. I took an Uber out to the rifle range in the next suburb and did a bit of shooting and bought some ammo. I had a leisurely lunch in a Lebanese restaurant and drank wine and read my book. I went back to the suspension shop and played with the workshop dog.

The girl-child called. She’s working as a trainee nurse in a veterinary hospital now. She said she had a sore foot and didn’t want to walk to the bus stop and could I pick her up.

They finally finished my bike. I put my earphones in and listened to some cool piano jazz on the motorway while I rode home. It was still nice and quiet behind my new windshield. I grabbed the girl-child’s helmet when I got home. I rode to the vet hospital, which is about fifteen minutes away.

I walked into reception. There were two receptionists. “I’m here to pick up the trainee”, I announced. One went to get her. The other one smiled and tried to make conversation. “Are you her father?” she asked.

I frowned. “No”, I said. “I’m her parole officer. What’s she been telling you? That she has a father and a mother and stuff?”

She seemed to be at a loss for words, so I kept going. She would have told them about her pets. “All she has”, I said, “is a serpent and a feral cat.”

“You’ve ruined everything”, I said.

I rode the bike up to Ben’s place on the weekend. It’s 270 km each way. The front suspension seemed a bit more compliant and resistant to brake dive than previously. I wore the Schuberth R2. It was light and comfortable. The Givi Airflow seems to work by creating a venturi effect which squirts high velocity air over you and leaves you in a still bubble. There was hardly any wind noise.

It got dark on the way home and I had a tinted visor on the Schuberth. I rode the last hundred or so kilometres with my visor open and it was perfectly comfortable and still quiet.

Except for the exhaust sound. By Christ that pipe is loud. I’ve never noticed it before.

I’ll have to do something about that.