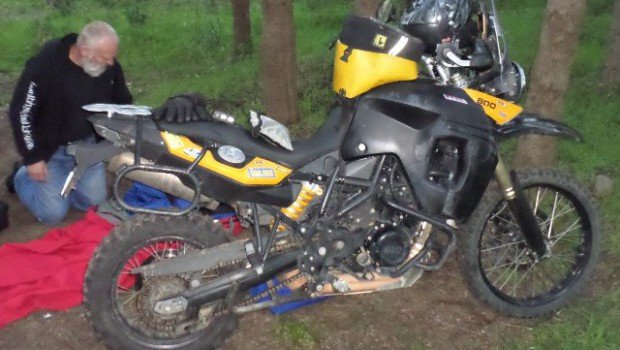 It was dry when we got to Capertee at about 10:00. We were still damp and cold from the rain over the mountains, so we stopped at the Royal Hotel for warming whiskey. It was closed.

We pushed on to Sofala. We raced along the Ilford road, and Boris beat me like a rented mule. We stopped at the Royal Hotel for a cooling beer. It was closed.

Royal. Not a name I trust any more.

We went to the camp site. Rob had already set up his van and was preparing meat for a spit. Frog was with him. Frog is licenceless, it having been confiscated by the Organs of the State for Bad Attitude. I believe one of the later offences occurred when he spotted some pretty girls in bikinis and decided to ride on one wheel because, he confided in me, pretty girls love that shit. Unfortunately he didn’t spot the nearby police car, and things assumed the shape of the pear pretty soon after.

Frog had travelled from Rockhampton to Melbourne by air. Rob had driven him from Melbourne. About 3,000 kilometres all up.

Andrew turned up. He had ridden from Perth, some 3,800 kilometres. He said the high beam spotlight on his streetfightered R1 stopped working somewhere on the Nullabor Plain, and they have some BIG kangaroos out there, and the road trains are pretty big, too; but he made the Pilgrimage.

Matticas drove in. He’d broken his toes when a 4WD came around a turn on the wrong side of the road and knocked him off his bike into a creek. The hospital gave him crutches and drugs, so he hired a car and made the Pilgrimage.

Johnno showed up and fell off his DR. 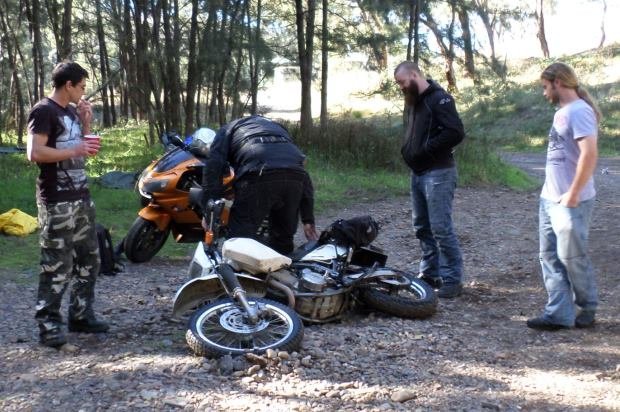 Not that there’s anything wrong with that. Apparently.

Tents were pitched. Fires were lit. The first keg of beer was broached. Dinner turned on the spit. Big Dog was wearing a People’s Liberation Army cap, and declaimed a paragraph from Mao Zedong’s Little Red Book periodically. Frog shared his bourbon with us. Big Dog shared Chinese rice liqueurs, and everyone hated upon him. Scotty shared Islay scotch. Snowy and Tim told war stories.

Pete turned up after midnight. He had lunched the gearbox on his DR650 somewhere up north, caught a train to Sydney, borrowed a pickup truck, driven back and picked it up, and driven it to the Pilgrimage.

Rob fed us coffee and bacon and eggs in the morning, and people organised groups to ride to lunch. I took seven pilgrims on a group ride out to Sallys Flat, along the dirt road to the Gold and Fleece Hotel at Windeyer. We ate and drank, and took the Queens Pinch Road to Mudgee, headed out to Hill End and looped back to Sofala. All agreed that the roads were brilliant, including the Victorians. High praise indeed.

Dinner came off the spit that night, and the second keg was broached. More people arrived. I admired Kel’s MV Agusta and asked him where his tent was. “I didn’t bring one”, he said. I asked him where his sleeping bag was. “I’m wearing it”, he said. The minstrel set up his Macintosh and his amplifiers and his mixing apparatus and tuned his guitars. 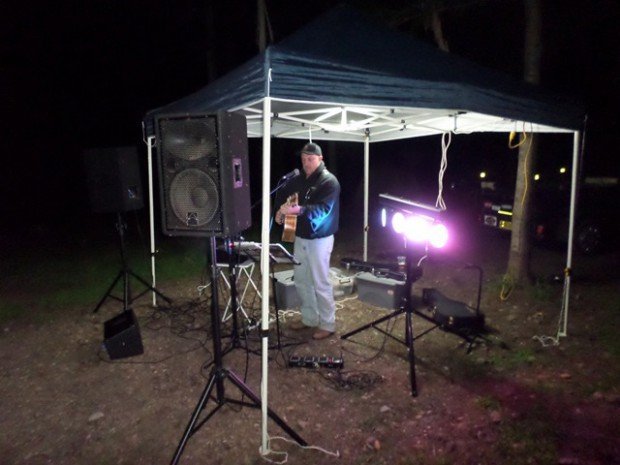 There were a couple of solo efforts in the mosh pit. The keg ran dry. Rob went and bought more beer.

I retired after the last set, and lay in my tent reading Wolf Hall on my kindle until sleep arrived. I rose at 0700 and walked down to the river with Boris shortly after. Kel was asleep in his leathers on the ground next to the fire. “Ecce homo!” exclaimed Boris.

We woke Kel. He seemed slightly hungover. “Kel,” I said, “you are as hard as Chinese trigonometry. Didn’t you even bring a pillow?” 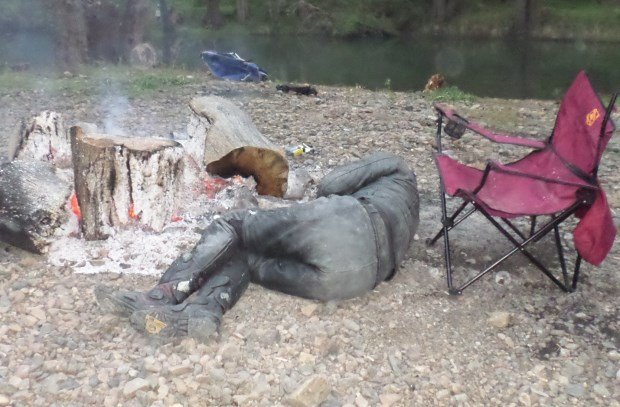 Hard as a cat’s skull

“I offered him a rock to rest his head on”, someone said. “He said it was too soft.”

We had coffee. We struck camp. Kel left.

I said my goodbyes and left too. The fog was heavy for the first fifteen or twenty kilometres. It was uncomfortable and dangerous, managing the low visibility, the condensation on the visor, and the cold that made the controls hard to operate. Just as the fog stopped, I came across Kel. He was wearing what he had slept in: motorcycle boots, leather pants and a leather jacket. He was only doing 80 km/h, despite the fog having cleared.

I wondered why he was going twenty kilometres per hour under the speed limit, and then I noticed he was wearing an open face helmet and a pair of sun glasses. Severe cold, and medium pain, and blindness, I decided. I gave him a small wave as I passed.

Motorcyclists. We suffer for our art.