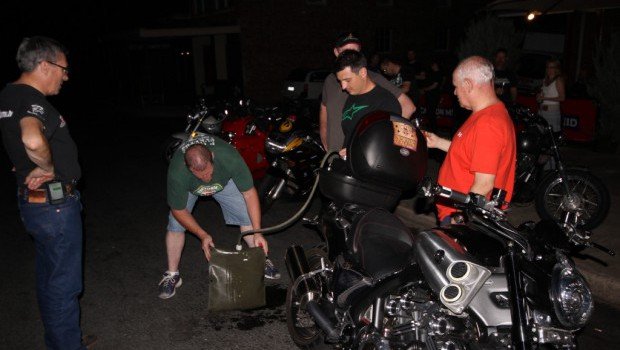 It was after 21:00 when I eased the VFR800 in to Tallangatta, running on fumes. Most of the people in the Victoria Hotel had been drinking since 14:00, and it took a while to explain that before joining them I had to get petrol out to Bly, who was sitting on the side of the road sixty clicks outside of town next to his dry Ducati Streetfighter.

The merry wassailers rallied around brilliantly. They borrowed a hose from the publican, and drained a motorcycle tank into Bly’s fuel bladder, and even found a car and a sober person to drive the fuel out to Bly. I went with him.

Bly was surly when we got back, and I was very hungry. The publican said the kitchen had closed, so I had beer for dinner. I am told it is liquid bread, and good for you.

There were already fifty or sixty people there. I renewed my acquaintance with my Victorian friends, and met some new people. One guy I met said he found my forum posts educational. That surprised me. I don’t post that much on the forum. “Educational?” I said. “How so?”

“I didn’t even know who Schlieffen was before I read your stuff”, he replied, swaying slightly. He pronounced Schlieffen to rhyme with “hyphen”.

I remembered then. Some hand-wringer had posted in some forgotten thread something along the lines of “How did we get into this mess?” I think he’d been drinking. I had replied “We ignored von Schlieffen’s dying words.” I think I’d been drinking.

“Yep”, my new friend continued. “You’ve educated the shit out of me, Al.”

He looked at me and swayed a bit more.