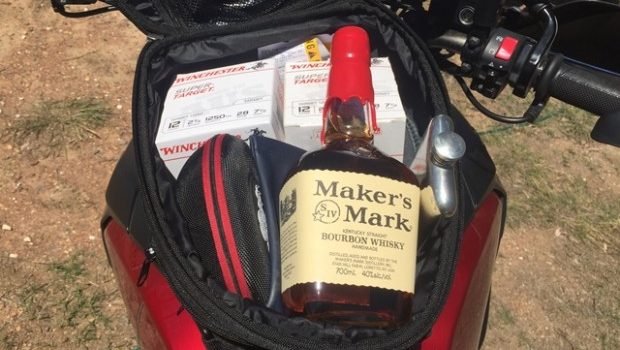 PAPA’S GOT A BRAND NEW BAG

I owed Neil from two floors up a favour, and when I told him I was probably going to Ben’s on the weekend to shoot a few clay pigeons, he said “I’d love to do that.” So I invited him.

He accepted and went out and bought a Versys 1000. As is only correct and proper.

Also Boris told me the guys from the Givi importers wanted to give me one of their 15 litre ST603 Tanklock tank bags to write about, so it was a good opportunity to raise the birds to stone ratio.

It only took a few minutes to remove three screws from around the fuel filler and fit the mounting ring. After that, the bag just snaps on.

It’s a good bag. You can put things in it. I had a clip-on tank bag on my last VFR that had an internal pocket with a curved metal bar in it to keep its shape. The bar kept working loose. The Givi  ST603 is made of stiffer stuff, and needs no bar.

There’s a net wall making a separate compartment in the lid, and if you need more room than standard you undo the lower zip that goes all the way around it and the bag expands upwards a few more centimetres. There’s a compartment to hold your mobile phone on top and the locking mechanism that clips on to the tank ring is adjustable fore and aft, so there aren’t many bikes it won’t fit. All in all, it’s a seriously well thought out piece of kit.

I filled the ST603 up with stuff that I figured was important to keep to hand, and we left at 0800 the next Sunday.

We stopped at Raglan near Bathurst for fuel. There’s a red lever where the bag mounts to the snap ring on the fuel tank. You pull the lever and the bag comes away, and you can fill the tank. So I did.

It’s about 80km from Raglan to Ben’s joint. The last 20km is dirt. It needs grading. If I’d had a magnetic tank bag on it would have spent 20km rubbing dirt particles into the paint, but the ST603 sits above the tank on the mounting ring and has no magnets to attract grit.

We got to Ben’s joint. We set up the trap. We adjusted the preload on Neil’s rear shock up two notches and increased the rebound damping a bit. We went up to the house and had a leisurely lunch. We compared two types of beer. Fraser Briggs and Sainte Etienne for those who care.  Ben got the shotguns out. I got some more beer. We headed down to the clay trap.  Ben opened a beer.

We opened more beers and drank to this wisdom. We shot clay pigeons for an hour. We went back up to the house, and sat on the verandah and drank another beer.

There was a big huntsman spider on the wall. I pointed at it. “They sell those things as pets in the pet shop the girl-child goes to” I told Ben.

“About forty bucks” I said.

“Why would you go to a pet shop and spend forty bucks on a spider?” he said. “Personally, I’d just get one off the web.”

We left about three. We stopped for fuel at Lithgow. Neil said the Versys was a good thing. He said it was fast enough, and comfortable enough, but it would be a handful if the dirt got any worse than it was because of the seventeen inch front wheel.

He said it handled way better after the suspension adjustment. He went noticeably faster over the mountains on the way back than he did on the way up.

It was dark when we got back. Neil went up to his apartment. I took a photo of the tank bag. I took the iPhone 7 out of the clear compartment in the top and re-attached the sunglasses holder to the top.

Nice piece of kit. 560km of NSW country roads including some rough dirt and it performed as designed. It would be real handy on a long tip.

I locked the garage, picked up my helmet and bag and went upstairs to plan a long trip. 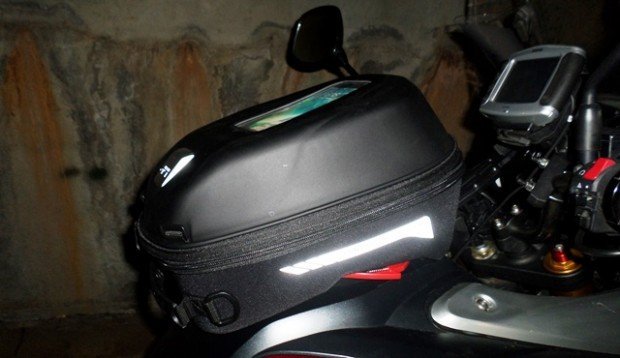