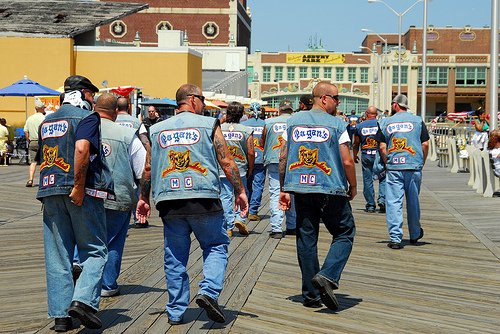 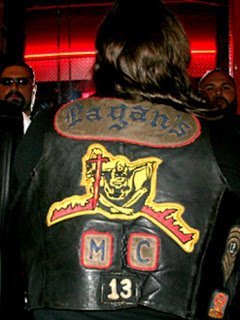 RIDING ON THE EDGE

Outlaw motorcycle clubs have been in the news a lot lately. But it’s a fair bet that most of you know as much about them as the tabloid media does – which is not all that much at all. Well, here’s a way you can broaden your horizons a little and see the world through the eyes of a motorcycle outlaw.

John Hall joined an upstart motorcycle club in the 60s and eventually became the Long Island NY Prez of the Pagans, a club the FBI said was “The most violent criminal organisation in America”.

John did time in gaol. He has also taught history, American studies, rhetoric and mathematics at Penn State University. He has raised seven children (half the time as a single parent), been a professional gambler, a law clerk and has written more than 400 syndicated opinion columns and seeks what George Jean Nathan once described as the three essentials of life: “Reasonably well-prepared food, a moderately alcoholic diet, and the amiable company of amiable women”.

It is inevitable that such a man would have a tale or two to tell. And he certainly has, beginning with what it was like for him to ride with and eventually run the Pagans MC in the late 60s – a seminal time in the on-going evolution of the outlaw biker. This was when the “legend” of the outlaw biker was born and cemented forever in the psyche of the USA.

The whole book is pinned irrevocably (but cleverly) to the Norse legends (the Pagans’ patch depicts Dark Surt, who guards the realm of Muspell, as explained by Snorri Sturlson in The Norse Edda of 13th century pagan Iceland.

The Pagans MC was born in Maryland, but thrived in New York and Pennsylvania where a lot of Germans settled as Mennonites.

The author draws a very valid comparison between the Pagans and the old pre-Mennonites – a mob called the Brotherhood of Zion, which was invented by Thomas Munzer, who, inspired by Martin Luther, organised the German peasants into this crazy Christian cult within whose members “the Holy Spirit burned as a living flame and devoured the impious – the impious being all who got in the way of Munzer’s new world order: priests, nuns, bishops, abbots, magistrates, nobles, Jews, Italians, bankers, merchants – that is, for all intents and purposes, anyone who was not a good, hard-working German farmer with beer on his breath and shit between his toes.”

Hall continues his history lesson, placing the Pagans into a geo-historical context for the reader: “The brotherhood of Zion sacked churches, monasteries and cathedrals. They smashed every painting and every statue they got their hands on. They established a Mother Club in Thuringia, where they proclaimed polygamy and divided all the women among themselves. Finally, the Imperial [German] authorities raised an army to crush them, but the Brotherhood rallied under a banner with a hammer on it, the symbol of the ancient pagan god of thunder. On May 15, 1525, Munzer led his zealots to destruction on the battlefield of Frankenhausen, where they fought with stubborn fanatacism right down to the last man. In the end, Munzer was captured, tortured and killed. Later, the Brotherhood was re-organised along the Rhine river by Menno Simmons, who introduced a new doctrine of pacifism. But the old spirit of rebellion still burned in the Mennonite’s hearts, and they were arrested, tortured and killed…for their obstinate refusal to recognise any spiritual or civic authority outside their own community.”

These were the people who settled Pennsylvania and from whom sprung the Pagans. “The outlaw mentality of the Pennsylvania Dutch is most graphically illustrated in the Martyrsspiegel (the Martyr’s Mirror) the most popular book in colonial Pennsylvania after The Bible. It is an illustrated account of every German martyr who ever died for the Protestant faith.”

And while the history lesson is vital for a clear picture of how this all came together, Hall is at his best when describing the mindset of outlaw bikers, their motivations, their runs and their incredibly camaraderie…

“Pagans were obviously not immortal. You could kill one or even run one down in the street…But everyone knew that if you killed or even hurt a Pagan, there was no telling how the others might retaliate. Everyone knew there would be no way to reason with them, or intimidate them, or even buy them off. The 60s outlaws were not in it for the money. Because they were like religious martyrs in their convictions, they struck fear into everyone…

“This was the glorious Summer of 67. There were no helmet laws. And there were no sexually transmitted diseases that a $5 trip to the doctor couldn’t cure. Nobody cared about drunk driving as long as you didn’t have an accident. And barroom brawling was as much a part of life as sex and rock’n’roll.

“In the meantime, nothing mattered except living with class and going out in style. We were the legendary 60s-style outlaws, and we tried to do both. On a Friday afternoon, if we had five bucks in our pocket, a well-tuned carburettor – no small matter in the days of the kickstarter – and a softly purring engine, we were set for the weekend, and we expected to get laid, drunk and in a fight.”

But the times were indeed a-changing…

“Unfortunately, about this time, drugs, in particular speed pills, began to work their way down into the redneck class, and all hell was about to break loose, like on the day of Ragnarok. Bikers didn’t make the shit, they just got caught up in it like everyone else. Some brothers jumped whole hog into meth-heaven. Often this went on for days, until they crowed like the three great roosters, howled like the frost-wolf, and fought like grizzly bears, and, in general, behaved like wild swine.

“It was a berserker mentality. The ancient Germans hated the idea of dying in bed – the strohtod (straw death) they called it. Instead they looked for ways to die in combat. They formed an elite brotherhood called the berserkers…and their subsequent recklessness scared the shit out of the Romans who wanted to get home from battle alive. On a fine sunny afternoon in September of 9AD, they slaughtered 30,000 Roman legionaries, the toughest soldiers in Europe, and nailed their heads to the trees on the Tuetonbeurg Forest mountain as a warning to anyone else with thoughts of defiling the sacred soil of their Heimatland. Similar disrespect for personal safety impressed the old 60s outlaws the same way it did their ancestors.”

Throughout the book, the authenticity of Hall’s experience is evident as he shares various events and moments with the reader. As in the morning-after-a-big-night discussion regarding the purchase of coffee and beer…

“We shoulda thoughta that before we wrecked it,” Skip mumbled. He was genuinely bummed. You could see that in his face; morning coffee was to him what sun was to cold-blooded reptiles.

“Lookee, lookee,” Flipout said. He was holding a bottle of Old Overholt with a few shots left. He took a drink and handed it to me.

“Make sure it’s not piss,” Updegraff said as I started to drink.

“It was the image of Chuck. Chuck in the front seat of that old low-bellied, gas-burning Buick, with a wad of bail money in his shirt pocket…riding toward York County jail. His white knuckles twisted around the steering wheel like he was ready to rip it off, his face all twisted up like a demented elf and frozen like stone, all the way chanting his perverse mantra through clenched teeth: ‘Leaky cunt, leaky cunt, it’s always some funkin’ leaky cunt’. That was simply Chuck’s version of what some people call the cherchez la femme motif.”

His grasp of the important things is profound…

“I believe that on hot and lazy summer afternoons, when you’re out riding free in the breeze, heading for a watering hole because clouds are gathering and a storm is breaking, and you got your sweet baby riding behind you, resting her head on your back and softly humming and old Willie Nelson tune, and the two of you don’t have a care in the world, other than the impending storm, that’s when you know you are the last of a dying breed…”

And he was there when stuff got crazy…

“Things did not start well. Billy was drunk when we picked him up and he had a bottle of whiskey. He never drank whiskey, but he was beginning to do a lot of strange things he never did before. For one thing, he usually made sense, but he was talking gibberish the whole way and he kept sipping whiskey the whole time. When we got to Jersey, we got lost. While we were riding through the area around Newark with all the big oil storage tanks, somebody innocently said: ‘This would make a good fire.’ Then without warning, Billy rolled down the window, yelled: ‘Watch this!’ pulled out his gun and started shooting the oil and gas tanks.”

I could go on and on with examples of this man’s important, often funny and mostly outrageous and accurate account of what is it was like when the outlaw motorcyclist truly became the legend that sells Harley-Davidson, and now causes apoplexy in our politicians.

It is published by Motorbooks (www.motorbooks.com) and it is invaluable for anyone who ever wondered what the whole “outlaw thing” was once all about. It is not written by an undercover cop, a wannabe or a fringe-dweller.

It is written (and brilliantly so) by a true outlaw and as such will explain many things to those who are interested enough to find out. As a snapshot of what OMCs were like in that time, it is priceless. In my humble opinion, this is far and away the best book ever written about them.