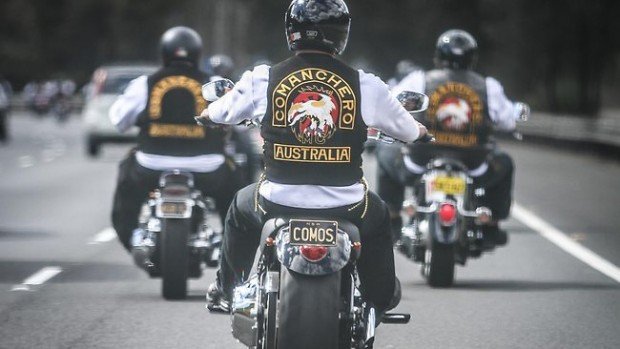 I note the Queensland government has ordered its police “pull over every bikie, even if they’re doing nothing wrong”.

Apparently, this is to stop crime by outlaw motorcycle gangs. The innocent, according to the Queensland government, have nothing to fear.

I applaud this. These people are statistically more likely to be criminals, and should be forced to prove that they are not.

While they are targeting people who are statistically likely to be criminals, now would be a good time to start interrogating Catholic priests, even if they’re doing nothing wrong. I mean, say what you will about the Hells Angels, they don’t do much in the way of raping and torturing little children. Also, the HA don’t have their clubhouses open to the public every weekend, encouraging young impressionable people into a lifestyle with little respect for earthly authority.

Also, Aborigines. They are over-represented in child abuse and general crime statistics. The cops should intercept them too, even if they’re doing nothing wrong. In fact, they should intercept any dusky chaps, and make them prove they are Indians or something and not Aborigines.

Suck it up, darkies. If you’re innocent, you have nothing to fear.

Muslims. The muselmani have been responsible for a fair bit of lawless mayhem, and criminal conspiracy to blow up and shoot a bunch of people in the last couple of years. They do the child abuse thing too, so they should be targeted as well, even if they’re doing nothing wrong. Some will have been educated in those Pakistani madrassas, I would think, and the prostate massage during the search would remind them of the good old days; so I don’t think there’ll be too much trouble there.

Also, police. They have such criminal tendencies that entire government departments exist to combat it. If cops want to, like, use roads and stuff, they should expect to be pulled over by, well, not cops, who are mainly criminals anyway apparently; but say, Bly, Borrie, Daz and me, and be made to prove to us they are not criminals.

If they are innocent, they have nothing to fear.

We will need guns. Also, batons, tasers, cuffs, pepper spray and ammo. And fast cars and bikes. I’ll have a VFR1200, and Borrie would like a Brutale. Bly and Daz are still drawing up a list. Also, I’ll be needing one of those long barrelled Glock 35s, and a spare magazine.