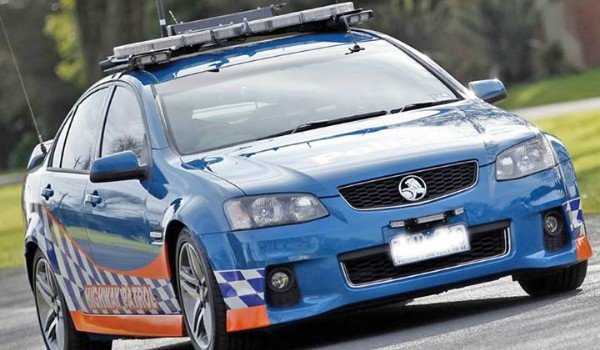 Ten or fifteen minutes out of Myrtleford on the way back from WSBK there was a loud noise behind me, and I looked in my mirrors and there was a gaily coloured VicPol highway patrol car. Not that I mean to infer that there’s anything wrong with gay. I would never do that.

I looked at the speedo, and it said 100, give or take, which was the speed limit in kilometres per hour; and I pulled over and took my helmet off.

The cop asked for my licence. “Why do you want my licence?” I asked.

“Because I am a member of the Victorian Police Force and I have asked you for your licence, so you are obliged to show me your licence”, he explained.

It was starting to sound like a religion, so I didn’t expect a lot of sense. He was wearing a microphone. He told me everything I did was being recorded. He gave my licence to the other cop, who sat in the car and communed with electronic devices.

“You must have been hammering when you came up behind me then”, I said.

He said he guessed it was.

“I figure”, I said, “that I look in my mirrors every ten or fifteen seconds. Let’s call it fifteen to save argument. So one look, and my mirrors are clear, then I hear the siren and you are twenty metres behind me, so you’ve come 480 metres in say, fifteen seconds.

“That’s 32 metres a second, which is, um, 1920 metres a minute, which is about 15 kilometres an hour over the speed limit.  That’s AVERAGE speed, so your peak speed would have been way higher.

“Unless”, I added, ”I look in my mirror every ten instead of fifteen seconds, in which case your average speed would have been around four hundred and eighty divided by ten, that’s forty eight metres a second, times sixty makes it twenty eight eighty metres a minute, times sixty makes it well over a hundred and seventy kilometres an hour. Average. You should have had your lights and sirens on. According to ads on the TV in the motel last night, every five over is a killer.”

I figured I was still being recorded. He looked at me as if he didn’t want to discuss how many people he’d killed. At least fourteen in the last ten minutes or so, if the formula in the TV ad was accurate. I was okay with him not wanting to discuss this, because I am a sensitive guy, and I know that the Victorian cops kill a lot of people, and I can understand the psychological pain it must cause. He went back to the other cop in the car. She gave him my licence.

He came back and passed my licence to me. “Alles in Ordnung ist” he said.  “Es steht Ihnen frei zu gehen.”

Just kidding. He said “Everything is fine. You are free to go.”