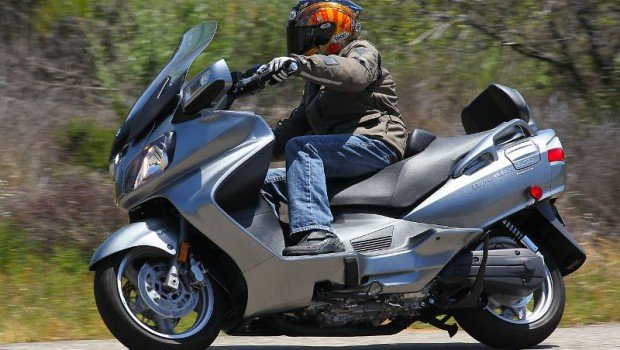 NOT THAT THERE’S ANYTHING WRONG WITH THAT

The road goes uphill after the bridge, and there are three good corners in a row, and they’re great fun. My line through the first was perfect, and it set me up in exactly the right position for the second, and I leaned the ‘Strom WAY over to the left, and a guy on a Suzuki Burgman scooter came from behind and took me on the inside. He hit a small bump while he was doing it, and something on his Burgman scraped on the road.

He got stuck in traffic a bit further on and I passed him and proceeded on my way to have a beer with George.

George was dismounting his Buell as I arrived in the pub car park. I parked the ‘Strom next to his bike, and as I was dismounting the guy on the Burgman pulled up next to me.

George said “Al!” and the guy on the Burgman took his helmet off and looked at my front tyre and said “You weren’t doing too badly back there for someone on knobbies.”

George said “Who’s your friend?” and I said he wasn’t my friend, he was a guy who passed me on the inside just after the bridge on his scooter, and George laughed.

The guy said “Burgmans are really quick. You should try one,” and I said no thanks.

The guy said “You can take mine for a ride”, and held his keys up, and I said no thanks.

George is a diplomat. He is from Armenia. “My friend”, he said. “This discussion is cutting into my drinking time. Perhaps I could explain why he REALLY doesn’t like scooters.”

“Let me give you an example”, said George. “You know that other clown at McDonalds? The one that hides from homos?”

“What other clown?” said the guy.

George looked at me. I looked at him. We walked into the bar. The guy on the Burgman shook his head and started putting his helmet back on.

George ordered two beers. He laughed again. “I cannot believe that you were passed by a guy on a scooter”, he said.

“Not funny, George”, I told him. “The wounds are still new.”

“Al”, he said, “you have to answer me one question with complete honesty, after which we will never speak of this again.”

“Now tell me truthfully, Al”, said George. “You didn’t know about the second clown, did you?”