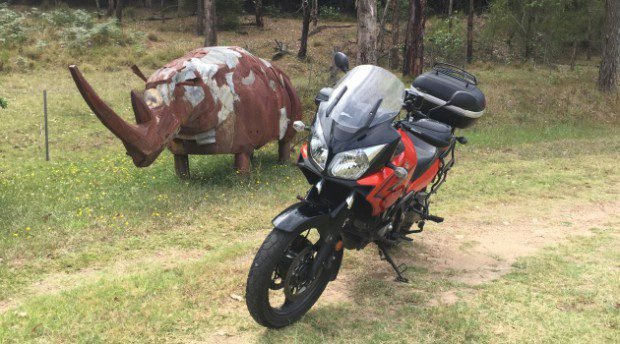 I hardly ever go north, so I went north. I got on the motorway, and I’d been going for twenty or thirty minutes before I realized I had run out of plan.

I put it in the lap of the Road Gods.

“Dubs I turn off” I said, and pressed the button to display the odometer. The last two digits came up “77” a few kilometres on, so I took the next exit. It was signposted “Cooranbong”.

The exit ramp ended in a T intersection. “Odds left, evens right”, I said, and looked at the odo. The last digit was odd. I went left. I followed the road. Mandalong, Jilliby. A few kilometres of dirt. Not a super exciting road, but scenic.

Another T intersection. Evens, so I went right. I played with a guy on a Honda Shadow and went up the hill at Yarramalong. T at the end. Evens again, right.

I knew the road. The Wollombi Bends. Great bike road. Last time I lost my licence was from being booked there. This time, they’d re-paved the turns where the road was chewed up and I could go faster. There was no highway patrol.

There’s folk art, metal sculpture, at the side of the road near Laguna. An abandoned car wreck with a pair of enormous metal ants on it. “Odds I stop for the next one”, I said; and checked the odo. Last digit was three, so I stopped a little further on where someone had made a giant metal rhinoceros.

I took a photo and considered my options. The Wollombi Tavern was less than ten kilometres north. “Odds home, evens pub”, I said. Evens again.

I bought a beer and went out to the rear veranda. It has a nice view. There was one table free, so I put my helmet and my beer on it and sat down.

A guy came back to the table next to me with a tray of beers and said “So tell me more about these bears.” He had a north American accent.

“They’re not as bad as people say”, said his friend. “If you’re that worried about them, just put some sticks on your head. They’re scared of deer, and they think the sticks are antlers.

“Just be careful picking up the sticks”, he continued. “You wouldn’t want to grab a branch snake.”

I sipped my beer while the joker expanded on the dangers of Australia. The victim revealed himself as Canadian. He said he didn’t even know there were deer in Australia, and the joker said there were two types, imported ones from Indonesia and marsupial deer that carried their fawns in a pouch.

About half way through my beer the Canadian said maybe he wouldn’t camp and would stay in motels. “Good”, said the joker. “The only thing you’ll have to worry about is the spiders.”

I headed for the door. I heard a voice behind me saying “There. Did you see what he did there?”

I headed north and put a route in the GPS to return via the Putty Road, which is a good ride. It would have made my return home far too late, so I did a U turn and headed back past the Wollombi Tavern. The people from the next table were outside. The Canadian was looking under his car.

I got home around 1800. The girl-child greeted me and asked how my ride was.

“Excellent”, I said. “I watched someone prank a leaf.”