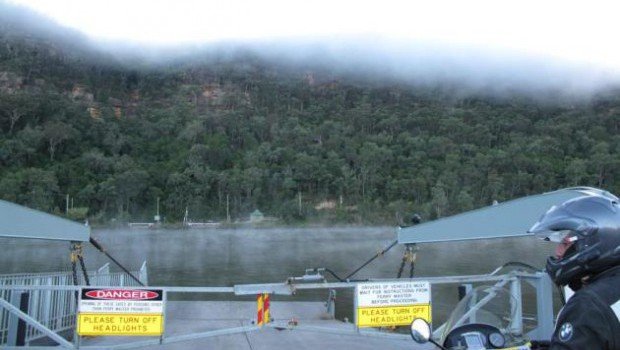 My usual day rides are around 500-800 kilometres, but I was running short on time. The stress, though, did not abate. A calming  beer at St Albans,  I thought, would  be just the thing to stiffen the sinews and summon up the blood.

Then I looked at the map and there was a dirt road with a Greek monastery on it in the general area. Perfect, I thought. Quiet contemplation would be the ticket, I told myself, and if, like so many God-bothering celibates, the hairy brothers of the Suppedaneum cross made strong liquors perhaps I could liberate some of it in return for a modest donation to the coenobitic cause.

I proceeded apace. I raced a hipster on a Triumph twin into the township of Wisemans Ferry. I stopped at the service station, and some guy on a Street Triple started yelling “Al!” as I filled the wee-Strom. It was a guy from the office. He and his friends were going to Spencer. I didn’t know why. I told him I would tag along for part of the way, but that I was looking for a monastery. He looked at me as if I was weird.

He looked at me as if I was weird again.

It’s true. I rode many miles with the devil dodger on lonely winding roads, and supped with him on tasty steaks in country pubs. On one ride he crashed the VFR near Jamberoo, and he replaced it with a Blackbird. On another ride he crashed the Blackbird near Araluen. I put it down to my being a godless and profane man, and his god being a jealous and vengeful god who is strong in wrath.

I found a dirt road that I thought was the one with the monastery on it. I went along it or a few kilometres and passed an ashram. Some pilgrims in the grounds waved. “Mariska hargitay, vegetarians”, I said inside my helmet, and waved back.

A bit further on, the road was barred by a gate. I lost interest. I turned around on the narrow dirt and headed back. “Satyananda Yoga”, the sign at the ashram said. If I was their marketing guy, I would have added “Inquire Within” below it, if just to see how many people got it.

I went down a bit of the Old Pacific Highway. It’s always crawling with cops on Sundays, so I cut across to the motorway. There was a cop hidden on the motorway.

On Monday I told the guy from work that I’d never stopped at Spencer, and asked him why he did.