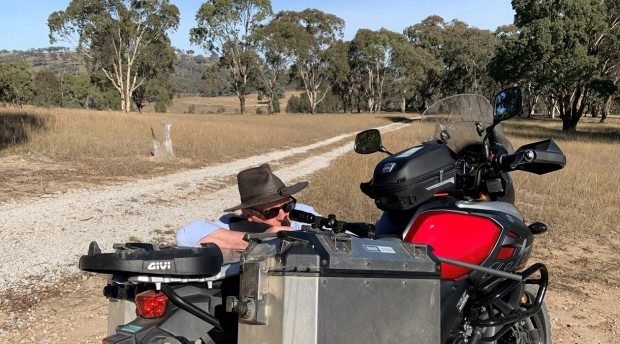 I had lunch with Bly at the Tarana hotel in late December. I told him I’d bought an automatic turn signal cancelling system for my bike.

“How much was that then?” he asked, and I told him it was a bit over a hundred Euros.

“It really bothers you that much, cancelling your blinkers, does it?” he asked, and I said yes, it did.

It arrived in January. I took it down to the bike mechanics and asked them to fit it. I picked it up that afternoon. The bill said “SUPPLIED PARTS IN SELF CANCELLING INDICATOR KIT DO NOT WORK WITH YOUR SWITCHBLOCK”.

The supplied parts were a pair of rubber sponges that were supposed to stop the switch from locking in position. The turn signals cancelled when I turned, but I had to operate the switch anyway, because if I signalled, say, left; the switch would lock in that position, the signals would cancel after the turn and then if I went to signal left again it wouldn’t activate the signals.

I emailed the suppliers in Slovenia and told them the problem. They wrote back and said I was wrong and enclosed a picture of the switchblock showing where to put the rubber things. It looked nothing like my switchblock.

I emailed Slovenia again and said the picture looked nothing like my switchblock. Also, I said, the turn signals refused to work at all one day until I stopped and turned the ignition off and back on again. I said Suzuki changed the switchblock in 2014 to put controls for the computer and traction control in it but I figured they knew that because I had to put my model year into their web form and it said congratulations, your bike is compatible.  I opened up the switch block and sent them pictures.

They wrote back saying my switchblock was the same as the second picture they emailed me, except it was different. They said they’d fitted their system to thousands of DL1000s. They said the switchblock was the easiest part of the installation. In the last email in January I told them that their email at purchase time saying the device was compatible with my bike was false and misleading.

They wrote back in February saying the device obviously wasn’t mounted correctly. They sent a link to a thread on the Stromtrooper forum where a guy had mounted it on a DL1000. I read the thread. It didn’t say what year model DL1000 it was.

I spent March pulling the switchblock apart every week and trying to find out why it didn’t work. I bought some rubber sheeting from the hardware store to try and make my own anti-lock things. I also went on a few rides. While the device cancelled the turn signals in suburbia, it was bad at detecting lane changes. Also, it often cancelled prematurely while stopped waiting to turn. I sent them an email which said “Your web site says ‘Money Back Guarantee’. I bought the unit on 19 December, received it mid January, had it fitted 19 January and advised you that it doesn’t work the same day. It’s been on the bike close to two months and still doesn’t work.”

Slovenia said that was obviously the problem. It wasn’t detecting vibration because the subframe is rubber mounted. I looked in the parts diagram. It isn’t rubber mounted. Also, the bike is a thousand cc twin. Everything vibrates, including the fairing and windscreen. Especially at idle when you’re waiting to turn.

I told the Slovenians I was going to uninstall it and I wanted my money back. They said well, okay, but I had to return the device first.

I took it into the shop. I got the mechanic that put it on to take it off. I got him to photograph where it was installed. It was installed on the frame under the tank. Not that far from an engine mount.

I emailed the Slovenians asking what the return procedure was. I didn’t get an answer.

Ben called and said he’d replaced the ‘scope rails on my .223. He said I should come up and test it.

I took a day off work. I went the long way. It was an unpoliced Thursday. I had a glorious ride. I rode the Wollombi bends, stopped for fuel and then rode the Bylong Valley Way with licence-shredding enthusiasm. Then there was the Ilford to Sofala road and the swervery on the Hill End road just out of Sofala. The turn signals did exactly what I told them to.

Ben had chilled beer waiting. He’d marked out a fifty metre range. I got the turn signal device out of the top case and hooked it over the target.

The first shot took the oil out of the barrel. The second was a bit low, and I adjusted the scope up six clicks. The third one hit it. It was most satisfying. 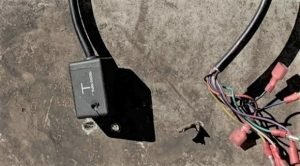 Ben inspected the device. “Aiming for the middle?” he said. “You’re hitting a centimetre low at fifty metres.” He inspected the ballistic chart on the ammo box. “Should be just about perfect at a hundred.”

“I’m almost tempted to get the range finder and move the target out fifty metres”, he added. “But you’re only here for a day, and that beer isn’t going to drink itself, you know.”

I left the next morning. I rode the Hill End road and the Ilford Sofala road again. I didn’t do the Bylong Valley Way, because I figured I wouldn’t get away with that sort of shit two days in a row.

I got home and checked my email. There was one from Slovenia.