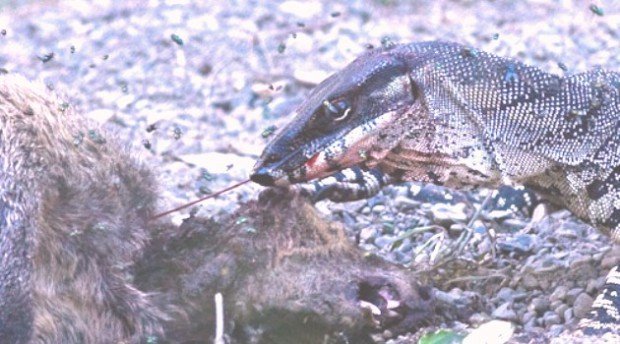 I woke with a slipped disc early in the week. The chiro got it straightened a bit. I figured it was from overwork and stress. I called Ben and said I needed a break. He said he had plenty of whiskey, beer and ammo and I should come up Thursday.

I took the girl-child. We went over the mountains on the V-Strom. I took the back way out of Lithgow through Sodwalls and Tarana, and weaved over the Fish River and the railway line to Kelso, where we stopped for a steak at the Kelso Hotel.

We got to Ben’s around 1430. I had a couple of beers with him. The girl-child played with his dogs and his remaining chicken, and explored, and caught a big shingleback.

The next day the girl-child and I went off for a few hours to explore the Bishops View Road. We stopped on the dirt road near Ben’s place to look at another shingleback. He did his threat display, all pink mouth and blue tongue. We got back on the bike, and a couple of hundred metres further on a car passed us going fast. I bet it killed the lizard.

They were grading the Bishops View Road. It looked difficult and slow. We decided to explore it another time. I kept heading north and then turned right and headed south on the Windeyer road. We stopped at the Gold and Fleece Hotel and had a drink in the beer garden.

We kept heading south. There were plenty of dirt sections. The front wheel went for a longish slide on one bit, but it recovered at last. We got onto Ben’s road and I saw a bearded dragon on the road and stopped. I picked it up and gave it to the girl-child, and said “Hold this and I will take your photo”, and reached for my phone. She walked to the side of the road and put it down and it ran away. She wears earbuds and listens to her iPod when she rides on the bike. I figured she didn’t hear me.

I had more beer that afternoon with Ben, and we sighted in my hunting rifles, and cleaned and oiled them.

We left Saturday morning. We stopped for another bearded dragon on another dirt road. I gave it to the girl-child and went for my camera again, and she let it go again.

We got off the dirt roads. There was a brown snake basking on the Hill End Road near Sofala.

Three hours later we were approaching Blacktown through some new suburb developments. There was a dead kangaroo on the side of the road – unusual so close to suburbia. My eye caught movement and I checked it out again. There was a large lace monitor feeding on it. It must have been close to two metres long.

I stopped at the service station before the motorway to top up the tank. The Indian guy who took my money had a badge on his shirt that said “International Mens Day” and “Stop Male Suicide”. I asked him how many suicides he had stopped. He looked embarrassed and said he didn’t think he’d stopped any.

“Dark things. Things we’d never even tell our wives. Things piled up in the shed”, I added.

He gave me my change. “Not the shed out the back,” I said. “The OTHER shed.” I gave him a significant look.

“What did you say to the guy behind the counter?” asked the girl-child when I got back to the bike.

“I thought he was Indian, but he looked white as you were leaving.”

“Hmm,” I said. “He said something about today being International Men’s Day.”

“I didn’t even know that was a thing”, she said.