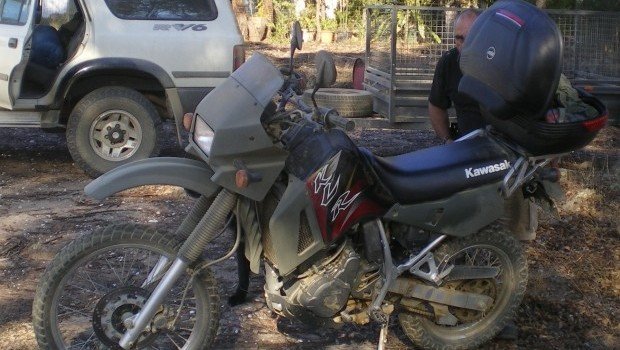 I popped a cracker of a wheelie coming off the lights on Eastern Valley Way on Thursday.

My KLR makes me laugh out loud, most days.

I arrived at work with an insufferable smirk on my face, and everyone thought I’d gotten laid.

My commute is only six kilometres, but there’s a racetrack section where I occasionally scrape the sides of the Blundstones even though the KLR has dirt tyres. Sometimes I think I might emulate Barney from the forum and write a wordy feelgood piece about it, but I couldn’t be arsed.

One of Barney’s other traits is to eat a lot of chilli and garlic and drink a lot of red wine, and I have been following this for several months too. I have to admit that this promotes a sense of wellbeing, and makes me more than usually insufferable. It has health benefits too, apparently, so I will probably live forever, or certainly to a number approaching that.

So, on the plus side, those who have to put up with my insufferableness will probably be dead before I am. Sucks to be them, huh?

Also, I have two motorcycles. How good is that? I’m glad you asked. I ride my VFR regularly, sometimes with my friend Bly, with whom I do interesting stuff like having tasty lunches in country pubs at the end of winding roads, or getting filthy drunk and eating food cooked on fires and shooting feral animals with rifles.

And I have friends who lend me motorcycles. When I go to Daz’s country estate, I can ride a Honda CRF230F or a Husquarvarna something 450 or a KTM 300 stroker. This inspires awe in me, although I do get shitty when I get given the quad. They are dangerous shit, man. They go the wrong way when you turn the handlebars. On the plus side, they have a gun rack and a beer holder; the inclusions of which on my KLR would probably make it the ultimate commuting appliance. But, it is part of the yin and yang of transport, and probably a metaphor for the balance of life.

Boris gets to ride different motorcycles all the time too, and I can understand how good life must be for him, even on those days when he punches people who shit him. It’s a Balkan thing, apparently, but I’ve met some of the punchees, and God knows they deserve it.