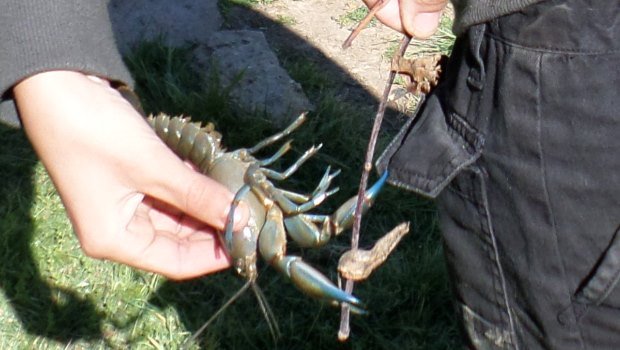 South of Bowenfels, I turned west on to Magpie Hollow Road.

The back way to Kelso was bumpy and scenic. Sheep and cattle grazed, parrots swooped, and trout slurped bugs from the surface of the Fish River to while away the eight days before the trout season started. I rode easy, revelling in the whistle of the VFR800’s valvetrain and the plushness of the ride with fifty five kilos of passenger and luggage on board. That road often delivers a surprise, and this time it was a bullcalf alone outside the fence. Herd animals are not good with no herd around, and he rolled his eyes in terror and ran around bumping into things, like a NSW politician given a summons to an ICAC hearing.

“It is a good and fine thing”, I mused, “to ride a motorcycle on a winding road.”

We had an early dinner when we got to Ben’s, and the girl-child told me she wanted to come hunting with us. I said no, and she begged. Finally I relented. “You can come if your uncle says it’s okay”, I said. “Thanks dad,” she said. “I already asked him, and he said I can come if you say it’s okay.”

“Nicely played”, I told her.

There was not much game out that night. We spotlighted for some hours, and I shot a kangaroo and a cat. “It is a good and fine thing”, I mused as we drove back to Ben’s, “to shoot a cat.”

The next day, a mate of Ben’s brought his family over. I taught the twelve year old boy to ride the XT225. I showed him how the controls worked, and told him the biggest mistake beginners made was getting surprised by the acceleration and tightening on the throttle, and the second biggest was worrying about hitting something and looking at it. I told him what to do in each case and sent him off. He did fine. “It is a good and fine thing”, I mused as he returned the XT225 some hours later, “to teach a kid to ride a motorcycle.”

I checked with the kid’s father and continued the boy’s education. I showed him how to bait a yabby trap with bits of kangaroo meat, and we laid the traps, and I got the old single-shot .22 out and taught him about safety and sight picture and breath control, and we shot at targets. He had a great time. “It is a good and fine thing”, I mused as I supervised the cleaning of the rifle, “to teach a kid to shoot.”

We checked the traps and found we had caught some yabbies. The kid’s father picked one up and held it near the kid’s arse, and the yabby nipped him. Hilarity ensued. “It is a good and fine thing”, I mused, “to make a yabby bite someone on the arse.”

The ride home on Monday delivered some surprises, too. I had to brake suddenly on the Turondale road when I came over a hill and there were a pair of kangaroos in the middle of the road. One went right, but the big one stayed on the road, and we chased him for a few hundred metres.

Further on the same road, we came across three piglets walking along the road towards us. They would have weighed maybe twenty kilos each, and were pink.

The Bells Line of Road was clear of traffic. We got home around midday, and lunched on wood fired Italian bread and olive oil. A bit after 1700, the front door opened. The girl child ran to it.

The next lessons I give her will be on marketing, and managing the news cycle.