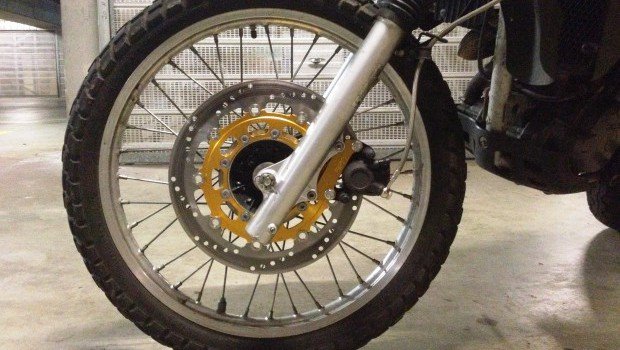 IN FACT HE’S A GAS

I decided that the front brake on my Kawasaki KLR650 is pretty much crap.

I went on line and checked out the KLR forums, and found that people agreed with me.

I took it for a test ride around the block. The front brake was worse.

I thought maybe that this was just because the pads hadn’t bedded in properly on the new disc. What it needed, I decided, was a medium length ride with lots of gentle braking.

I headed for Galston Gorge, and rode through the tight turns and hairpins to the bottom of the gorge. Then I kept going to Wisemans Ferry, because there is a steep descent to there as well, and also a pub.

I parked outside the Wisemans Ferry Hotel and went inside. I sat at the bar and bought a beer.

I was two thirds of the way through the beer when some drunk sat down near me, and wanted to chat. He told me he used to ride motocross on a Suzuki 400 in the old days, and he was doing pretty well until one race he had a big crash and injured his back.

I asked him what happened after that. He said he gave up riding motorcycles.

I asked him why. He said his doctor told him to.

I told him he gave up too easily. I said I knew a bloke who had a motorcycle accident and lost his left arm and his left leg.

“Jesus”, said the barfly. “What happened to him?”

I drained my beer, and stood, and reached for my helmet.