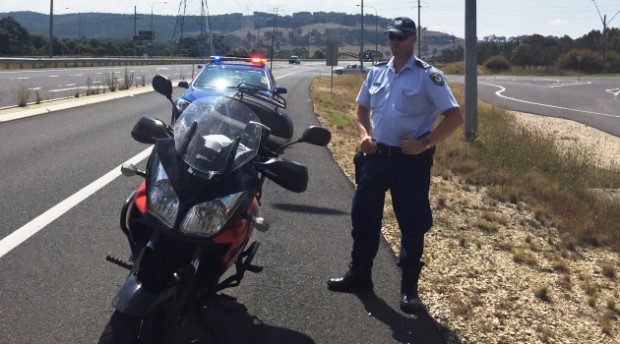 THE HIGHWAY IS FOR GAMBLERS, BETTER USE YOUR SENSE

I keep a mental list of roads I need to explore. “I’m thinking I will go west again”, I said to my wife. “Every time I see that road heading west from the Darling Causeway I wonder where it goes.”

She said “You could look on Google maps” and I put my fingers in my ears and said “La la la la la.”

The road north from Glen Davis was also on my list, and it is kind of in the area.

I headed over the mountains to Bell and found the road that I had wondered about. It is called the Hartley Vale Road, and it is a sweet ride on an adventure bike. It winds down the side of a small mountain on rough tar, then there is less than two kilometres of dirt, and the historic village of Hartley Vale. Then there is the climb into Lithgow on a winding road with a good surface.

“This will be my default way into Lithgow” I told myself, “when I am on an adventure bike and not in a hurry.”

I headed north out of Lithgow, turned east at Capertee and headed into the canyon. Crackerjack road. Great scenery. Heading north takes you along the valley floor. There’s a little bit of dirt, and long stretches of lonely high speed tar. There’s a pub at the end, at Kandos. I decided I will come back here with Bly, and buy him a beer.

I got back on the Castlereagh highway for the relaxing cruise home. I checked the fuel gauge. It looked like I should stop at Lithgow or maybe even Lidsdale. I was almost at Lidsdale. Stuff it, I thought, I will refuel at Lithgow. I looked back at the road just as the highway patrol vehicle came into view. I braked hard, and checked my mirror, and saw his brake lights come on and watched him do a U-turn and light it all up.

I pulled over outside the service station at Lidsdale. He told me I was doing 106km/h in an 80 zone, and then I braked to 91. I said surely his equipment was faulty, what with all that Armco back there and signals bouncing around, but he seemed pretty sure.

He told me that because he was a nice guy he would only book me for the lower number. I imagined him as a schoolboy nice guy, weighing up all those nice guy careers. “Perhaps I should become a vet, and care for injured animals”, I imagined him thinking. “Or a fireman, and save people from fires. Or a paramedic, and care for sick and injured people. Or I could dig wells for starving Africans. No, stuff it, I will  become an armed tax collector for the state.”

The real reason he would only book me for the lower number, of course, is that the NSW Police Silver Eagle II Operations Manual says “the minimum detection time is three seconds for a valid radar speed check” and the minimum speed I had been doing during the three second period was 91km/h. Note to self: brake harder next time.

He gave me my licence back. He said the fine was in the mail. I rode in to Lithgow and filled the tank.

There was going to be arguments about this. I knew three people who were going to say “well if you don’t want to get booked, don’t speed”, and it never goes down well when I tell them that if the highway patrol didn’t speed I wouldn’t have gotten booked either and maybe they should give their fatuous advice to that organization.

It was a good ride back over the mountains, though. The mosque on the Richmond Road near Blacktown had a flashing sign out the front that said “LOVE TO ALL. HATRED TO NONE.”

The Musulmani must have a new book.

About time. The old one was nothing but trouble, if you ask me.