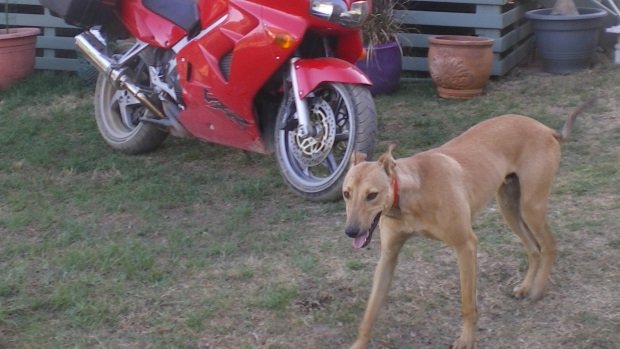 I love The Road.

I wanted to take the Tarana Road all the way through to O’Connell, but I’d had to leave Sydney late and the sun was getting low. I was heading west, and it was shining in my eyes, so I cut up to the Great Western Highway and refuelled the VFR800 just before Kelso.

I was two and a half hours and almost exactly two hundred kilometres out, with eighty to go. That eighty was pretty special, though. There were young lambs in the paddocks, and a big flock of black and white birds took off as I rode past one field. I was going too fast to want to identify them. The road twisted through the hills, and wound down to a river crossing, climbed the other side, and presented me with the first dirt eight kilometres later at Sallys Flat.

What a great name. I bet she was.

The dirt section was a bit less than twenty kays. A big charcoal grey wallaby crossed the road in front of me, but he was alone. I buttoned off a bit anyway. Another did the same thing a few kilometres further on. He was alone too.

Ben had unlocked the gate. I locked it behind me and rode the last two or three hundred metres to the house. Raffa, the Staffy/greyhound, walked around the bike three times, and looked hurt. He was looking for my daughter, who is usually on the pillion seat. She hugs him and strokes him. Everyone else yells at him and threatens him with sticks. He is a damaged dog. His first owners treated him like a human baby, and were sensible enough to give him away when one of them became pregnant. He would have killed the neonate.

Raffa points every now and then, and sometimes if you have a pair of binoculars you see that he is pointing at a wallaby maybe seven hundred metres away. He is a coursing-hound, bred to spot and run and hunt. He can reach about seventy kilometres an hour in three bounds. Sometimes he gets away, and goes and finds a wallaby and fights it, and comes back with wounds on his chest. He is good to look at because of his short hair and fine musculature, but he is wilful and disobedient and unable to concentrate on anything else if he sees a wallaby, or a shingleback, or a rabbit.

Ben needed his ecommerce site reorganised. He opened a bottle of Finnlaigh, because he knows what I need for a night of web wrangling, and cooked me a good dinner. We wrangled his web site. We took a break every now and then, and I drank more Finnlaigh and Ben drank more Wild Turkey, and we talked of the old days. He remembered my Zeds and my T500, and how I grafted a GT550 front end on it to get the disk brake. I remembered his Bultaco Lobito and his CR125 and his CB900. We spoke of crazy people, living and dead.

We finished around 0130, after about half a litre of Finnlaigh and maybe a bit more of Wild Turkey. Ben apologised in advance for breakfast. “I went in to Coles in Mudgee yesterday”, he said, “and they were all out of that streaky bacon. Good thing I went hunting last week. I’m afraid it will have to be venison and eggs for breakfast.”

One tries to make do.

We went fishing in one of the dams after breakfast. I left at 0930. Last time I left, my daughter was riding pillion and Raffa ran after us. Ben got in the Toyota and found him three kilometres down the dirt road with his paws cut and bloody from the sharp stones on the unpaved road. He got tied up this time.

Life doesn’t get much better.

I love The Road.