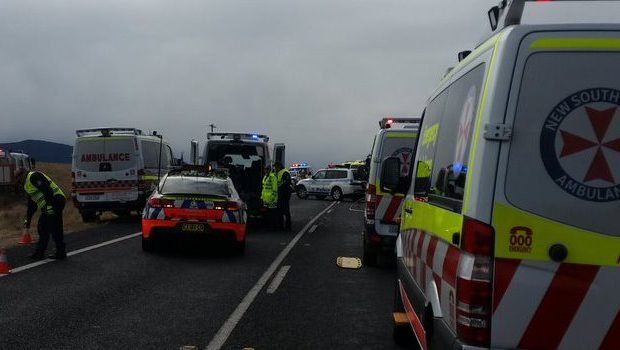 I read on the forum site that Biffa was going to ride down to Bombala and catch up with some of the guys from Victoria. It was to be a night, he wrote, of sober debate and quiet reflection.

I decided on the Friday that this was just the thing I needed, and I would join them if the weather looked okay. It kind of did the next morning, a bit, so I packed the bags and left at around 0930.

The road down seemed infested with large numbers of motorcycles, the riders of which rode them slowly. My new bike turns maybe 3500 rpm at a hundred kilometres an hour and makes peak torque at 4000 rpm, so I had great fun carving them up without changing gears. They gave me disapproving looks and I ignored them and listened to music on my smartphone.

I stopped for fuel at Goulburn, at a service station which was infested with large numbers of slow people on cruisers. It started to drizzle rain as I left. It was cold.

The rain stopped around fifteen kilometres north of Cooma. I was listening to the guy from Alison Krauss and Union Station singing “The Road is a Lover”. I crested a hill, and there was about five hundred metres of stopped cars on the road.

I split down the side. There were five ambulances at the front, and a handful of police cars. I stopped. I couldn’t get past: there was a ditch at the side of the road. Two cars had collided head on.

Two more ambulances arrived. A helicopter circled. It took thirty or forty more minutes before the cops opened a path to traffic. An icy headwind came up and the trip computer told me my fuel consumption almost doubled, so I made an extra fuel stop before Bombala.

I booked into my motel and walked down to the Globe Hotel. I was very cold. They had an iron stove and Irish whisky, so I stood in front of the iron stove and had Irish whisky for lunch. Boris arrived towards the end so we had a few more whiskys and played eight-ball. I was feeling warmer.

He told me that the slow riders on the highway were the Wall to Wall Ride, and they were commemorating police who had died on the job. “Surely not?” I said. “It’s not as if it’s a particularly dangerous occupation in Australia. Coal mining is far more dangerous. If cops die on the job it’s usually suicide, and vets and dentists kill themselves at higher rates.”

He insisted that he was not pulling my leg and that is what they were doing. I was sceptical.

The Victorians and Biffa arrived and we switched to beer.

The food in the hotel restaurant was surprisingly good, and we washed it down with more beer. Then, we drank some beer.

Some time after 2230, when questioned by the hotel management, the Victorians blamed the illegal fireworks going off at the back of the pub on mysterious people who ran away, and I was telling one of them that the way forward was to mate Rodrigo Duterte with Aung San Suu Kyi to produce a brood of warriors which we should use to fight the mujaheddin. It suddenly struck me that the evening of sober debate and quiet reflection had somehow degenerated into just another drunken debauch.

I went to walk back to my motel, but Boris was buying shots of some violently red coloured liqueur for everyone and claiming that it was made from the blood of Albanians. I had one. It tasted more of pomegranates and ethanol.

I rode back to Sydney with him and Biffa the next day. I doubt my blood alcohol count had hit zero as we left. The roads were still infested with slow guys on cruisers. We felt a little better after breakfast at Cooma. We nursed our hangovers through the back roads south of Goulburn. We made our final stop at Pheasants Nest. Boris complained about the noise the knobbies on my bike made when I rode beside him.

I went to lunch with the boss on Monday.

“Give me the highlights”, he said.

“That chilli pork was pretty good last time”, I told him.