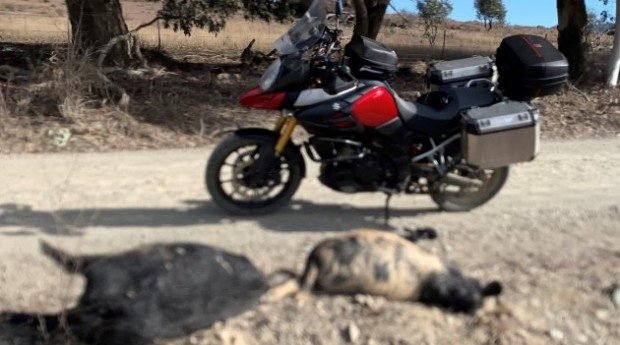 Midday, Thursday: A good time to ride the Putty Road. Riding it close to sunrise and sunset I’ve seen wallabies, cattle, lyre birds, a spotted quoll, deer on the road.

Even the cops know there’s no money in Thursdays.

Boris needed visiting. It was two and a half hours from my place.

I arrived early afternoon. We drank German beer and chewed chilli jerky. I told him I had the Putty’s Ten Mile section to myself. I told him how magnificent it was charging out of the corners with the traction control light winking merrily. He told me about riding it on a Yamaha R3 and racing a big Ducati that had lots of acceleration but couldn’t carry the corner speed of the R3.

We drank more beer. Boris lit the Weber. He put what appeared to be fatted calf in it after the sun went down. He served a Coonawarra cabernet with dinner. As we reached the end of the bottle I remembered that I had a bottle of Metaxa five star in my panniers, and he got out some brandy glasses.

Midday, Friday: A good time to ride the Bylong Valley Way. I might have even been sober by then.

Ben needed visiting. It was three and a half hours from Boris’s place.

I nearly hit a wallaby on the Ilford Sofala road while heading west with the sun in my eyes. I arrived late afternoon. We drank Japanese beer. I told him about the wallaby. He said if it made me feel better there were heaps of them on the sheep farm over the road, and we had a standing invitation to shoot them, and we might get a pig or a deer as well.

We had dinner. We went hunting for a couple of hours. I remembered that I had a bottle of Tennessee whiskey in my pannier. Ben got some shot glasses.

Midday, Saturday: A good time to ride the Turondale road.

I was on my way to it when I saw a pair of dead feral pigs at the side of the road. I stopped my bike because I wanted to take a photo of them and send it to Duncan with the message “Even the pigs left me alone.”

They looked like they’d been gut-shot with a shotgun and dragged close to each other for a photo. Probably drunks hunting from the road. It’s illegal, but it sometimes happens out there.

I took a photo of them with my phone. I sent it to Duncan with the message “Even the pigs left me alone.”

I got back on my bike. The road sloped down to the left. I couldn’t get it up off the sidestand. The V-Strom is high, it had a mostly full tank and the panniers are mounted high. I couldn’t reach the ground enough to push it up and I couldn’t use my weight because I only weigh 75 kilos or so and it weighs well over three times that much and carries it high.

I got off. I put it on full left lock and wheeled it backwards. I could get it up off the stand then. “This is stupid”, I said to myself. “I often ride deserted roads alone. I have to get fat and grow longer legs, or get a lower, lighter bike.”

I started browsing BikeSales during the week. I had to go to Brisbane on Wednesday night to exorcise a computer network. I finished the job on Friday morning, and accidentally bought a Yamaha MT-09 Tracer on Friday afternoon while waiting to board my flight.

I’m pretty sure I’ve made worse mistakes. I rode a 2015 Tracer a few years back, and a 2019 a few months back. I like how they conduct themselves.

It arrived a week after Tuesday and I took a couple of hours off work to get it registered and insured.

“Nice looking bike”, said the boss when I rode it into the car park. “So now it’s time to tell the missus, is it?”

“I knew she was a keeper the first moment I saw her, all those years ago”, I told him.

“How did you know that?” he asked.

“Because”, I said, “she was wearing massive gloves.”