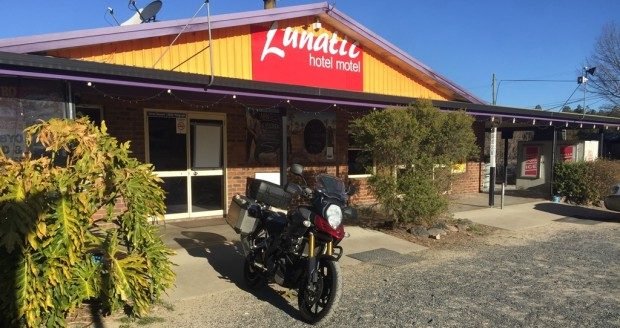 FELLOWSHIP OF THE RING

An Asian guy in a suit with no tie stopped me outside the Korean church as I was walking back from lunch at the Vietnamese bakery on Thursday. He wanted me to come inside and pray with him.

I said I didn’t think God would be real interested in what was on my mind right then and he said God is always interested and could always help. So I told him that my motorcycle was going to be due a new rear tyre soon and I didn’t know whether to stick with the Bridgestone A41s or get a Michelin Anakee III or Pilot Trail.

He told me God was interested in my dilemma and I should come in and he would pray with me. I told him that right now Zulus were murdering South African farmers and Arabs were raping Yazidis and Persians were beating women for headwear offences and I would feel bad if an extra Yazidi got raped or an extra South African farmer had his family murdered because God was busy talking me out of buying a Michelin. I always figured God was a Bridgestone man. Maybe next time, I told him.

I packed my bike that night, and on the Friday I rode to Tenterfield, which is up near the Queensland border. It’s over 600km. I had a great ride up Thunderbolts Way. There were four highway patrol cars on the New England Highway north of Guyra, but none of them got me.

Tenterfield is a comfy town. It nestles in nice scenery and has attractive buildings. I got there late afternoon, booked into my motel and went to the pub and ate lamb shanks for dinner. It was tasty. The house shiraz washed it down nicely.

I was due in Drake the next day. Drake is about 50km east of Tenterfield on the insane Bruxner Highway. Some of the guys on the forum go there once a year because the Bruxner Highway is insane. There’s only one place to stay at Drake: the Lunatic Hotel. It has twenty eight beds. They’d booked it out.

Froggy, who lives about fifteen hundred clicks north of there, had told me via PM in the strictest confidence he would be marrying Suze on the Saturday at Drake. I’d asked him for a time. “I figure we’ll be there around three”, he told me. “I’ll get her off the bike, wash her, marry her, and then we can have a drink.”

I’d tried to get Bly to come with me, but he was busy. “Isn’t Froggy getting married there?” he said to me on the phone.

“JAF told me in the strictest confidence”, he said.

I had a leisurely breakfast the next day. I read the Saturday paper cover to cover on my tablet. I did a language lesson. I got bored. I decided to ride to Drake. If twenty eight people were booked, SOMEONE had to be there.

I have previously alluded to the insanity that is the Bruxner Highway. It took me about half an hour to cover the fifty kilometres. It’s extremely twisty.

I got to the pub about 10:30. There were no motorcycles there.

I sat down and ordered a coffee. I walked around a bit. I read four chapters of my book and drank my coffee.

At 12:30 I ordered a beer. I walked around a bit. I read another four chapters of my book.

Mrs JAF was there. She was telling some of the locals in the strictest confidence that there would be a wedding taking place later.  I had a beer with her.

A Rural Fire Service truck and a police car passed going east under lights and sirens. Someone said there was a bushfire and they’d closed the road.

Froggy and his bride and his boon companions finally turned up after four. I had a beer with them. The sun got low. Froggy appeared in no hurry to wash and marry his bride. Some people hadn’t arrived due to the bushfire and the closed road.

I didn’t want to ride the Bruxner in the dark, for fear of hitting an animal. I left a bit before sunset. I went to the pub in Tenterfield and had the lamb shanks and claret again.

I left Tenterfield at 0730 the next morning. It was eight degrees Celsius, but sunny. I felt optimistic.

I dodged a kangaroo on the road fifteen clicks out of town, and turned the heated grips up another notch.

It was four degrees when I stopped for fuel at Uralla. The right lens fell out of my spectacles as I was leaving. An icy wind was blowing and my hands were too cold to fix it, so I put the lens in my pocket and rode down Thunderbolts Way with one eye closed.

It hit ten degrees at Walcha so I fixed my glasses and kept going. It was seventeen by the end of Thunderbolts Way and I had a great time on the swervery.

I stopped for fuel outside Stroud. “Is that a V-Strom?” asked the clerk when I went in to pay.

“Yes”, I said. “That’s a 2014. They changed the styling that year. Some say that from that year on they look like a hat only half full of arseholes.” He looked like he wanted to banter some more but appeared to decide against it for marketing reasons.

I got back late afternoon.

I had the Monday off, too. I lubed the drive chain on the ‘Strom.

I went to work on the Tuesday. I walked up the road for lunch again. The guy from the Korean church popped out in front of me. “Would you like to come in and pray?” he asked.

I looked at him. “Remember me?” I asked.

“Why yes”, he said. He was lying. I could tell from his eyes.

“It’s probably for the best”, he said.