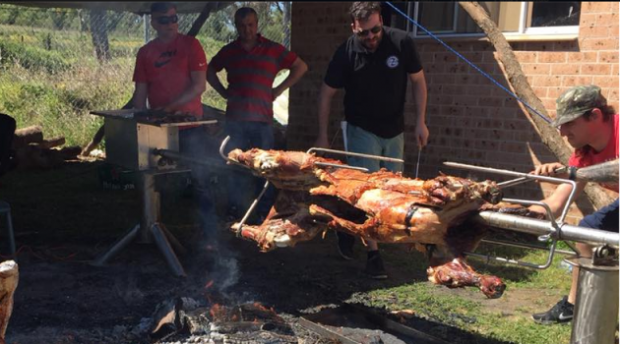 “You must come out with us on Sunday,” said Boris. “We are going to the Serbian hunting club barbecue.”

“I think I have something on that day,” I said.

“Horsecock,” said Boris. “The wog is strong in you. You will be coming.”

And it came to pass that on the Sunday I did ride my V-Strom to Long Dan’s place, and Long Dan and Boon and Boris and I did ride to the Serbian hunting club’s barbecue.

We were early. We parked our bikes near a covered picnic table. The Serbs are High Energy. We walked towards the food. A vendor of Russian and German steel stopped us and showed us his knives for sale. A vendor of leather sold me a sling for one of my hunting rifles. “It is the same leather that Gucci use,” he told me. “Fifty bucks. I swear they cost me that. I am not making a cent on this.”

We stopped where a man was barbecuing quails. He gave us quails on bread rolls. He didn’t want money. We walked past two bullocks turning on spits. A bit further along was a bar. Boris bought Heinekens for everyone.

We finished the second Heineken around 10:30. Boon bought a round of rakija. There were lots of people — maybe three, four hundred. We went for a walk and looked at the hunting vehicles and then queued near a bullock on a spit for some food. The guy didn’t want money. We took beef and salad and bread back to our picnic table and ate it. Someone bought another Heineken. It might have been me. A guy on an old BMW R75 turned up and parked his bike near ours.

Two old ladies asked if they could touch the bikes. We said yes, and one of them stood next to my V-Strom and held the handlebars and the other took her photo. Some young girls in national costume walked past. I looked at Boris enquiringly.

“They will dance for us later”, he said.

The guys who were still hungry went and got some venison stew.

An orthodox priest got out of a car and walked past our table towards the food. “Ah yes”, said Boris. “There’s always a priest.”

I reached for my smartphone. “Is it rude to take his photo?” I asked, because I am a culturally sensitive person.

“No, that’s fine,” said Boris, “but he will probably want to come over and bless us.”

“Well”, I said. “I will ask him to come over and bless us, and I will take his photo while he is doing it.”